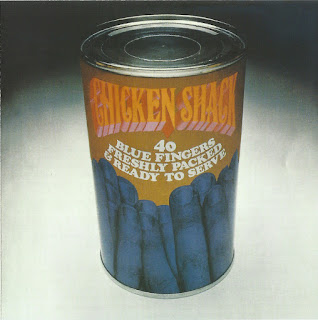 When my brother Richard and I signed the Blue Horizon label with CBS Records we had nothing to offer them but Fleetwood Mac and the promise of a single featuring Aynsley Dunbar's band Retaliation. Derek Everett, who headed the A&R Department at that time, didn't show too much concern. "Blue Horizon is going to be a long term project for us.

When you've got something that you really believe in, we'll work with you on it". We had plenty of ideas of where to pick up product – it was just a matter of time and being in the right place at the right time. But everyone - including the veritable monkey's uncle - seemed to know what we were doing and what kind of material we were looking for. It was'nt long before those demo tapes started to appear by the sack load.

Now in the run up to our distribution deal with CBS I had been working with a band from Stourbridge - The Chicken Shack. They were first introduced to me by David Deacon- Yeats who had originally been the vocalist in the Shades of Blue along with guitarist Stan Webb. I was really impressed with the raw energy of this band and especially with Stan.

He reminded me a lot of Buddy Guy in his approach. There was another angle too – they had a girl playing piano. Christine Perfect. But prior to signing with Blue Horizon the band went through a few changes. As a trio they had spent some time working at The Star Club in Hamburg. That was with Stan, the ever present Andy Sylvester and drummer Alan Morley. It was around this time - 1965/66 - that I got involved with the band in a managerial capacity. It was an experience but I would have to say in all truthfulness not one I would wish to go through again. But a number of changes were made that proved to be for the better before I let go of the helm.

Firstly, Alan Morley was replaced by American drummer/ vocalist Alvin Sykes. I must admit I cannot recall exactly how Al came to my notice. He was living in San Francisco and was leading his own band The Sound of Sykes. He was an excellent drummer and a very fine vocalist reminding me a lot of Little Junior Parker. My one real regret is that we did not get to record with him before he was forced to return to the States when a work permit was refused.  At this point, The Shack returned from Germany and immediately added Christine to the ranks once again and also took on a new drummer, Dave Bidvvell. It was this line-up that was featured on the band's first single release "It's Okay With Me Baby" (57-3135) and on their first album "Forty Blue Fingers. Freshly Packed And Ready To Serve".

It had been something of a surprise to many that the first Fleetwood Mac album had hit the charts but not many expected The Shack to emulate their stablemates with their first outing. But that's exactly what happened! The band and I chose the material for this album in an attempt to give the best balanced programme possible. Both Stan and Christine contributed two originals each and the remainder were taken from the various songbooks of Freddie King, B.B. King, Buddy Guy and John Lee Hooker. Once again, we added a small horn section featuring Dick Heckstall- Smith, Steve Gregory, Johnny Almond and Alan Ellis to add a little variation.

It's remarkable how well this album stands up after such a long time. There's a real freshness and enthusiasm here which proved hard to better in the years to come. Nevertheless, Chicken Shack were to have their real moment of glory - a top 20 Chart entry with a cover of Etta James' "I'd Rather Go Blind" - but as far as their album releases go, this is my own personal favourite. International recognition soon followed. As with The Mac, The Shack found themselves continually on the road promoting themselves and their new product. They were a considerable draw on the club and concert circuit. Stan proved to be the epitome of the true showman and it was not uncommon for him to appear on stage via the street or car park towing a 150 foot cable behind him.

He would wander off into the audience and sit himself on some young lady's lap or get himself a drink whilst still continuing to play. He knew how to hold an audience and once he's got them where he wanted then he would not let go. Meanwhile, the rhythm section would thunder on undeterred with Christine Perfect's mellow vocals and fine piano work acting as the ideal foil. Chicken Shack now had a new manager - Harry Simmonds. Ham had been working with Savoy Brown, which featured his suitar playing brother Kim and his invovement with Chicke Shack added a new impetus to the band's career. Who remembers those tours when Stan and the band backed Freddie King and Bobby Parker? I wonder how many of those who will read these lines will have been at one of those historic gigs?

Who recalls the Nag's Head Pub in Battersea - now a corner plot boasting a Council flower bed and a wooden park bench. Who was at the Digbeth Town Hall to see Bobby Parker resplendent in a pea green mohair suit and sporting a pompadour hair-do complete with James Brown quiff? Who's got a bootleg tape of either of them? Not me, more's the pity. Those were days to remember and my heart goes out to those who were not around at the time. "40 Blue Fingers" is as close as we can get to the spirit of those times.
by Mike Vernon 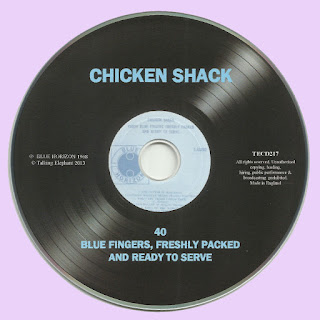 Free Text
Text Host
Posted by Marios at 7:38 AM 6 comments: