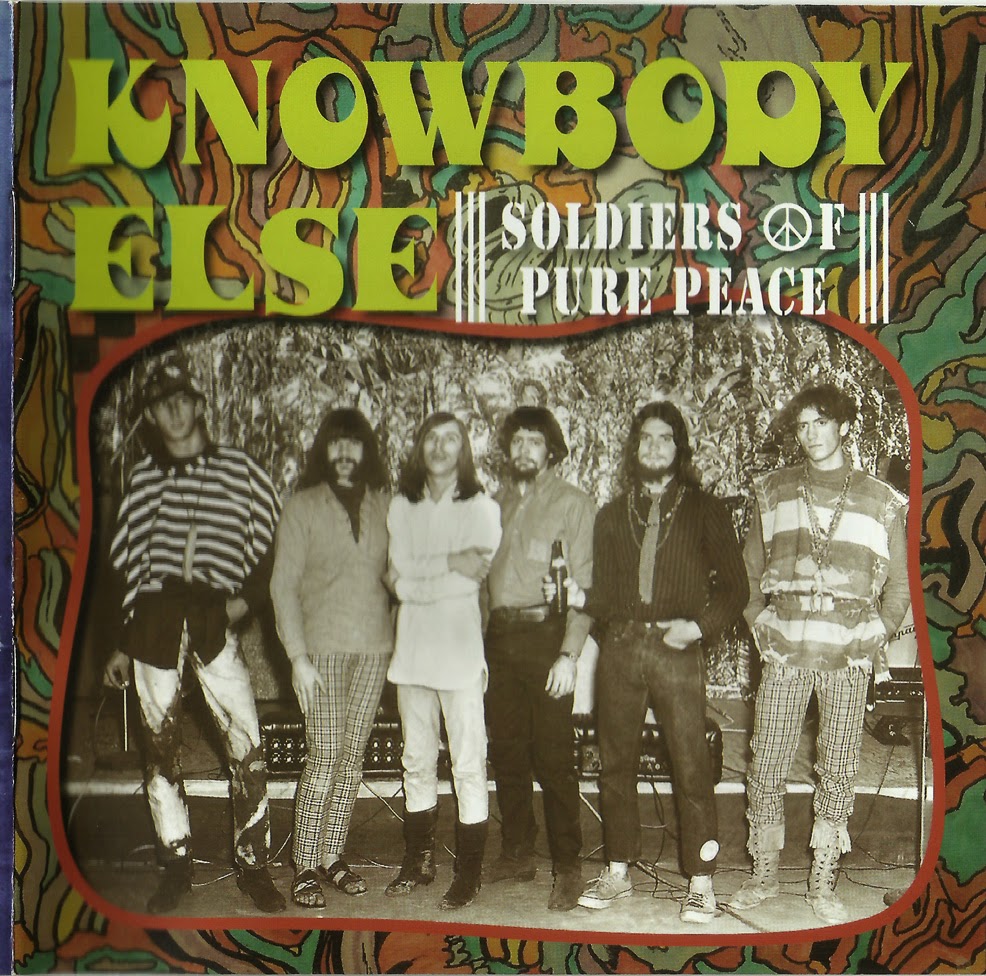 The band formed in Monette, Arkansas from the remnants of local bands the Surfs and the Epsilons, with members coming and going including Ricky Copeland on drums. Terry Cullen on guitar and Danny Knuckles on bass. By early 1966 they had coalesced as Knowbody Else with the lineup: ]im Mangrum, lead vocals, Rick Reynolds, 12-string guitar, Artis "J.R." Brewer, Jr., six-string guitar. Keith McCann, drums, Danny Reynolds, bass (shortly replaced by Pat Daugherty), and Ronnie Smith, organ and tambourine (shortly replaced by Harvey Jett). They were not The Knowbody Else, lust Knowbody Else. By not using the article their name became extremely cool. And they exuded cool.

What made them so exceptionally good? Their medium was performance and they took it to the level of fine art. Their live shows were enhanced by the visual aspects of each member's unique appearance and demeanor as well as the atmosphere provided by the lights and venue. Blend that visual image with the audial stimuli of their words and music, and you had an artistic presentation of exquisite melodic and visual excitement. It was performance art at its best: sound and sight fusing into pure poetry. Your emotions and intellect were thrilled to the bone. And, like all who achieve such levels of artistic creation and expression, they emitted the aura of the exotic, the magical.

The band lived together in an isolated house on farmland owned by ].R.'s father near Manilla, Arkansas. This arrangement allowed the band to focus completely on their art, free from normal societal strictures. Their art came first, and their goal was nothing less than perfection. They practiced rigorously every day, leaving all else to fall wherever it may. And if this meant that on many days the only food available would be popcorn and Kool-Aid, then so be it. It was through Knowbody Else that I first learned about total dedication to one's art, and the importance of self-discipline, which greatly influenced my own life as an artist. Knowbody Else was the most unique band I had ever heard. Every member had a microphone, and sang beautiful harmonies.

The band assimilated a lot of the music that was going on around them, yet came up with a very distinct style. There is a strong folk-rock feel to some of the material ("White, Mix And Smith"), while other tracks ("On A Busy Day") recall a mod psychedelic sound not unlike the Who. Some of their psychedelic excursions ("Ten Till Five") pushed the boundaries of the day, incorporating studio effects and eastern-inspired guitar riffs over a single-chord drone. Although in performance they played so loudly that your ears would still be ringing the next day, their studio work shows their skill to cover a wide dynamic range.

In addition to their original songs, they played many of the standard covers of the day, reinventing them to fit their sound. A sample of their repertoire includes: "Turn Turn Turn," "The Bells Of Rhymney," "My Little Red Book," "A Message To Pretty," "It Was A Very Good Year," "Could You, Would You," "It's All Over Now Baby Blue" (Them's version), "Don't Talk To Strangers," "The Sun Ain't Gonna Shine Anymore," "You're A Better Man Than I," "Stuck Inside of Mobile With the Memphis Blues Again," "I Don't Believe," "For My Own," "Leave Me Be" and "All Day And All Of The Night."

There was a contradictory air about the band, because they looked like outcasts, or criminals, or mad men. They looked dangerous, yet never hurt a thing. They practiced honesty, respect for others' property and beliefs, and peace. They did not enter your world. But through their performances you could enter their's. They did not compromise. They played at the same high quality every time they performed, whether to an audience of one, or to an crowd of hundreds. They were like gypsies. Not of this society, yet moving in it.

As I found out many years later, renowned Memphis musician, engineer and producer Jim Dickinson heard Knowbody Else, and was very impressed. He asked if he could produce and record their original compositions.  The band had been turned away by other recording engineers who did not know how to record a band that played as loudly as they did. Dickinson knew how to do it, and believed that the resulting album would make them all famous, and rich.

Throughout I 967, whenever they were close enough to make the drive to Memphis after completing a Saturday night gig, the band would spend the rest of the night in Ardent Studios working with Dickinson. At shows, they began to announce that they were recording an album to be called Soldiers of Pure Peace, and that it would be released by the summer of 1968. However, it was not to be. Shortly after the completion of the recording sessions, something occurred that caused the band and Dickinson to mysteriously and completely put the project aside. No one seems to know exactly what happened; maybe it was due to a mishandling of publishing rights, or the rejection of the album by Atlantic Records' Jerry Wexler.

The band created new songs for their repertoire and the songs from Soldiers of Pure Peace were never performed again. I, though, could not abandon those first songs of Knowbody Else. They are works of musical art which 1 had heard performed spectacularly on several occasions, and I had been eagerly awaiting the release of the album. It was very difficult to accept the fact that I would never hear these songs again. As the years went by I searched for anyone who might know something about what had happened to the tapes, hoping that recordings still existed.

In the early 1990s I was told that Jim Dickinson, who was also an authority on music recorded in Memphis, might have information about these recordings. I called him and we started a discussion and friendship based on our mutual love and respect for that phenomenon: Knowbody Else. Dickinson had once possessed the tapes of the songs for Soldiers of Pure Peace, but believed that they had been destroyed due to improper storage.  In a happy twist of fate, in 2005, Dickinson discovered the master tapes to 10 of the 15 songs he had recorded in 1967. Dickinson burned a CD of the songs for me, and after 38 years of searching  for the music, I was able to hear it again.

A couple of years later, I played the CD for Erik Lindgren who was visiting me in Oxford. Mississippi. Erik was blown away by what he heard. As with all performance art, its occurrence happening on the canvas of time, passing even as it is created, the art of Knowbody Else occurred, was experienced by those present, and is gone. But, we are lucky to have the soundtrack to their art. And now, 45 years after it was created, this musical masterpiece is presented to the world.
by Glennray Tutor, May, 2012 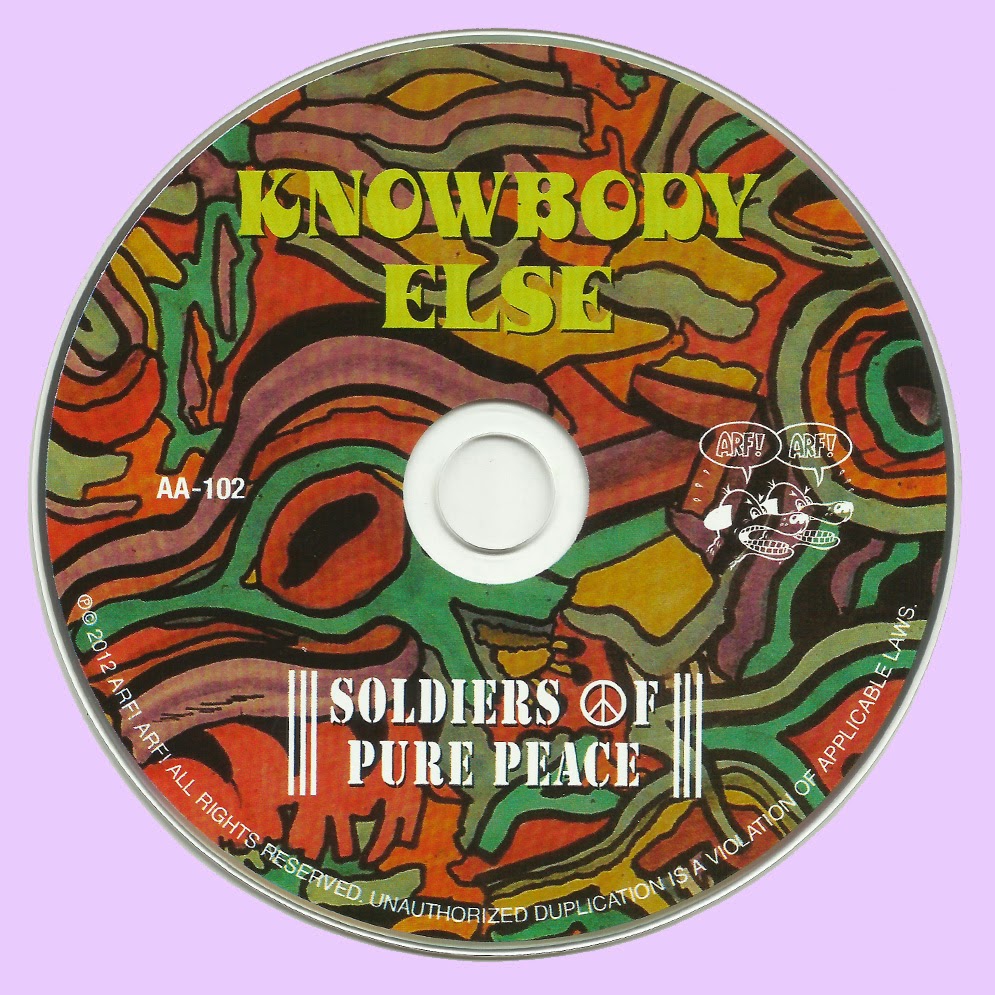 Free Text
Just Paste
Posted by Marios at 7:56 AM 9 comments: