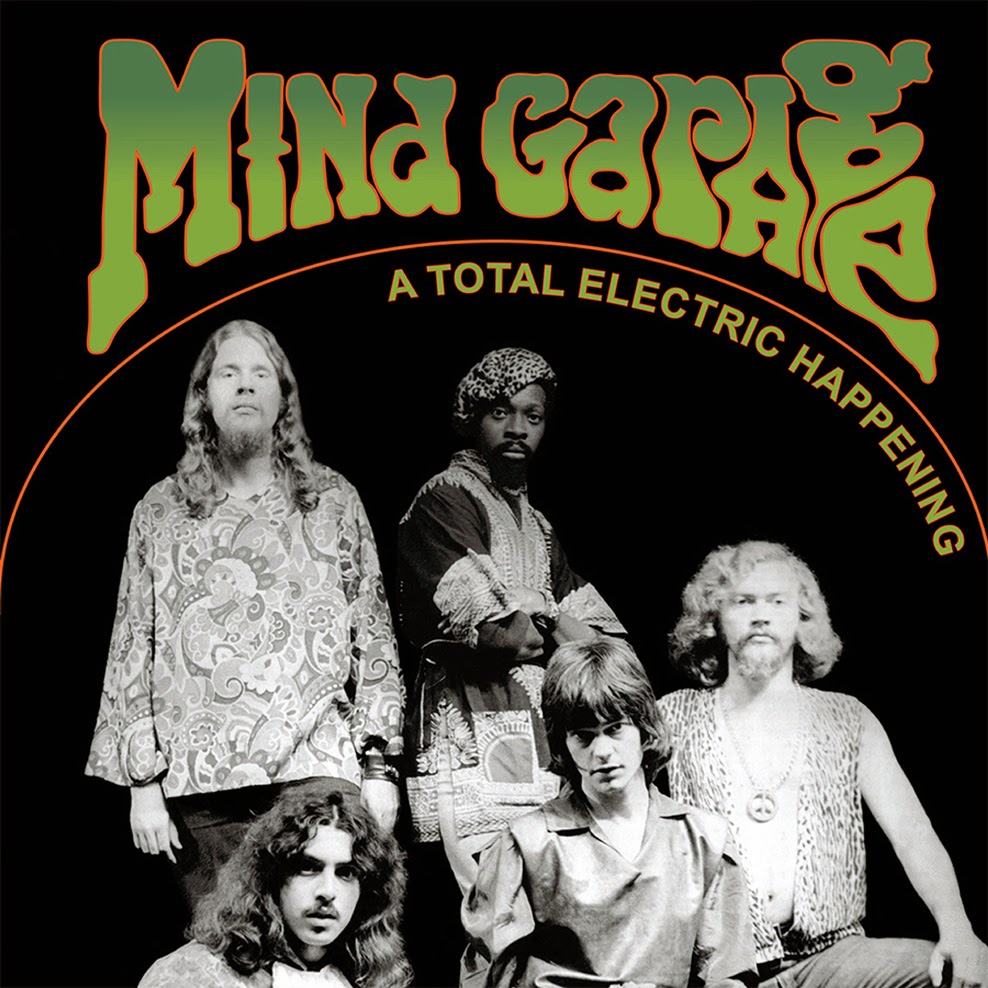 The Mind Garage story begins in Morgantown, WV with the release of the classic “Asphalt Mother” single on their own label and includes turning down an opportunity to play Woodstock, walking away from RCA Records in 1970 at the height of their success (never to be heard from again) and the first and very controversial integration of rock music and religion that saw the band performing rock music during services in churches around the country and ending with a petition for induction into the Rock & Roll Hall of Fame.  The story of the Mind Garage is much more than how a group of talented musicians worked their way out of the backwater to find success in the music business, it’s about how their efforts ultimately influenced and paved the way for an entirely new “Contemporary Christian” genre of rock music and how that music is incorporated into the worship services of Christian churches today and maybe, more importantly, why they disappeared at the height of their popularity.  Their story begins with a band caled the Glass Menagerie.

The Glass Menagerie was formed in Morgantown in 1966, by a group of students attending West Virginia University, and included the core of what would become the Mind Garage.  The band featured Larry McClurg (vocals), Tom Warfield (lead guitar), John Fisher (bass), Norris Lytton (sax) and Jim Straub (drums).  Early on Jack Bond would show up wherever they would play and watch the band perform.  Norris Lytton remembers “he was a dedicated fan.”  When circumstances forced the Glass Menagerie to shuffle their lineup, Jack was invited to join as keyboardist.  Jack played many instruments but didn’t have a keyboard so John offered to buy one for him and let him pay it back a little at a time.  The band was highly regarded locally and their reputation for playing British Invasion and psychedelic cover songs of the day, along with a few originals, was such that they were often booked throughout the US Midwest playing on bills with more established national artists.

The importance of the Glass Menagerie to the success of the Mind Garage cannot be understated as it was on these tours where the future members of the Mind Garage gained an education in how to entertain a large live audience by watching the headliners perform for crowds of up to 10,000. When the tour ended in the spring of 1967 the band broke up when their guitarist John Fisher left the band to join the Shadows of Knight (they had enjoyed a big hit in the US with a cover of Them’s Gloria) and drummer Jim Straub left for parts unknown, never to be heard from again.

In 1967 the cultural revolution was exploding nationally and long haired rock and roll musicians were considered “hippies” and violently disliked and ridiculed especially in a town like Morgantown where conformity was the rule and conformity meant being like all the other students involved in fraternities, sports and dances, and wearing your hair short and dressing conservatively.  Larry McClurg recalls the members of the band being threatened and harassed.  “Those dirty beatnik hippies” is what they called us.”  “We were spat upon as freaks, called communists, and were victims of discrimination, hatred, ridicule, lies, beatings, and sometimes called anti-Christ”.  “The unfortunate longhair walking alone somewhere at night would now and then come across a group of rednecks, frats or jocks hanging out drinking. They would block the path to intimidate the ‘hippy’ and one of them might whip out scissors to cut the long hair. Having your person threatened over the length of your hair seems absurd now.

In some respects Morgantown, a mix of intellectuals and cowboys, seemed like the Wild West”.  The cultural revolution was not limited to just secular circles but was also being fought in churches where young ministers and priests and members of the congregation were demanding changes be made to the services to make them more relevant to them and today’s world.  Reverend Paine and the band were both on the front lines of this revolution and therefore could not only relate to one another but help support each other by working together to change the status quo and that’s what they ultimately accomplished.

The band began their recording career in 1968 with the “Asphalt Mother”/”Reach Out” single pressed on their own Morning Glori label.  The A side “Asphalt Mother” is one of the all time greatest garage/psych records ever recorded and is a template many future punk and grunge records would follow without ever hearing it.  The band’s sound was new and exciting less British invasion and more loud, hard and heavy with a lot of fuzz and very psychedelic.  The record was pressed in a lot of 1,000 and placed in local record stores in Pittsburgh, Morgantown, Clarksburg and Fairmont WV and when they sold that was it.  The single never appeared on a Mind Garage album and it was therefore undiscovered and forgotten and has remained, even today, very much undiscovered.  Their live shows at that time were legend with Larry McClurg possessing enormous charisma and even some Jim Morrison like stage presence.

The music was said to mesmerize the audience and would capture their attention to the point that in between songs you could hear a pin drop.  Their lighting and light shows were effective in creating an atmosphere where the audience felt they were being taken on a journey and according to those who attended they were.  When they would play these “Electric Happenings” as many of the performances were billed they would include, in addition to the light shows, psychedelic fashion shows and all sorts of other music with opening acts playing jazz and even sitar sounds.  The concerts were interactive with “Total Environment, Total Involvement” themes where the audience was as much a part of the show as the music.
by George M Cannon 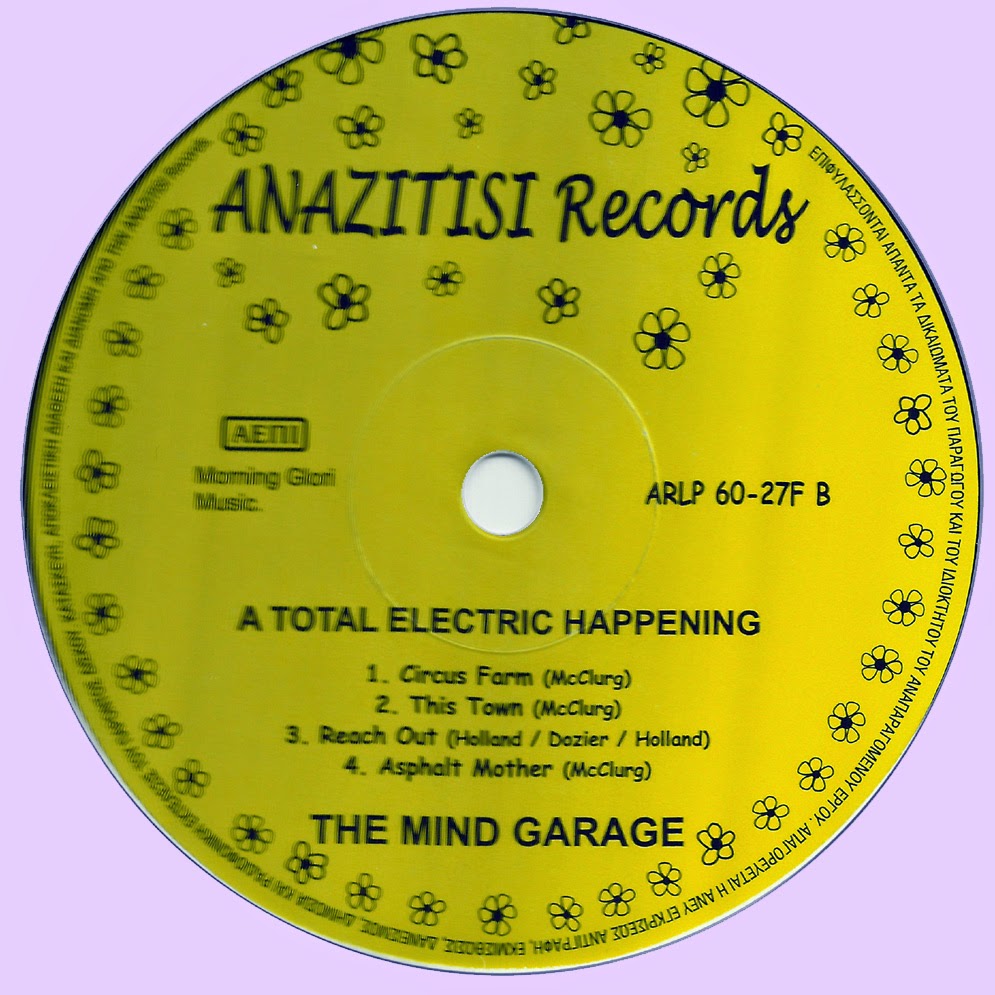 Free Text
Just Paste
Posted by Marios at 8:34 AM 15 comments: