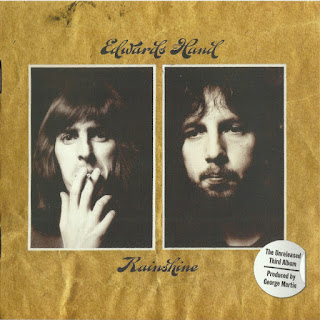 Rainshine was recorded in April 1971 at AIR Studios under the aegis of George Martin. His vocal and orchestral arrangements were, of course, peerless, the rhythm section of Les Brown and Harry Reynolds knitted together seamlessly, while David Dowd's guitar work provided the sympathetic, laid-back feel that was required.  Apart from the odd overdubbed line from the new Moog synthesizer, everything was performed live with an absolute minimum of overdubs, with Rod on piano and Roger on acoustic guitar. The duo's harmonies were sumptuous, while the addition of Harry Reynolds, Aliki Ashman and Charlene to the vocal mix brought something new to the table.

Most importantly of all, however, the new songs were superb. The likes of' ‘Going Down', 'Race Against The Sun' and 'Beam Me Aboard' were mellow, radio-friendly soft rock creations, 'New York City Rain' extended the earlier Simon & Garfunkel comparisons but added an understated country rock feel, while 'Lullaby' and 'Just Friends’ wore tender laments that reflected the influence of James Taylor during the early 1970s. 'If You Were Here and 'Pacific Coast Highway' were drowsy, winsome ballads that anticipated the sound of America (who, of course, would also be produced by George Martin), while 'Let It Shine' and 'Real Slow' were arresting slices of post-Beatles psychedelic pop/rock.  With its strings arrangement and prominent female backing vocals, the epic 'Its My Time' was a putative anthem, and the catchy 'Smile LA, You're The Centre Of The World' {complete with a sly reference to old sparring partner Al Stewarts song 'Electric Los Angeles Sunset') would surely have made a great single. Sadly, though, it wasn't to be.

The album was completed in less than three weeks and duly dispatched to the American branch of RCA. Lcnnie Poncher was standing by to set up a US tour, secure in the knowledge that, whereas Rod and Roger had previously requested an orchestra, they were now a tight, self contained five-piece unit. Their future seemed rosy, but a hard rain was about to fall. RCA were extremely unhappy about the change in style from the hard rock approach of Stranded; they didn't hear a potential hit single, and refused to release the album. "When we gave them Stranded, we were concerned that they wouldn't like it as it was essentially a progressive rock album", recalls John Miller. "Instead they loved it. When it came to the next album, they wanted another prog rock set – but instead we gave them Raimhine. They were horrified. They told us that America had plenty of Simon & Garfunkel-style soft rock acts of their own, and that there was no market for an English band doing the same thing. Lennie Poncher unexpectedly announced his retirement, so we had nobody in our corner, and RCA turned down the LP. George (Martin) was really shocked - he'd never had an album rejected before!"

It was a sad end to Edwards Hand, who, in Roger's words, "went out with a whimper". John Miller was already producing in his own right, and he suggested that they form a production company together, Triumvirate. This led to the three of them opening their own recording studio, Redan Recorders, and a new career as arrangers and record producers. Nevertheless, it should be mentioned that Rod and Roger did make one more album together: The Butterfly Ball And Jlie Grasshopper's Feast, released by the Argo label in 1975. This featured poems from Alan Aldridge's illustrated book of the same title, with readings by Judi Dcnch and Michael Hordern, and music and vocals by Edwards Hand. However, it is the long-lost Rainshine that effectively constitutes the duo's final work together: throughout their four albums that they recorded under the banners of either the Picadilly Line or Edwards Hand, Rod and Roger were always searching for their own style. They believe that, on Rainshine, they finally found it.
by David Wells, November 2014
With thanks to John Miller 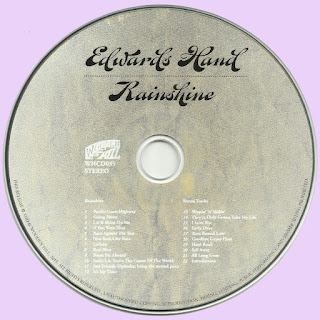 Free Text
Just Paste
Posted by Marios at 4:33 AM 12 comments: