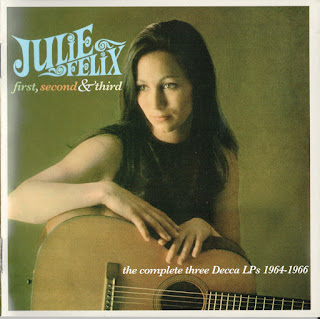 Although California-born, Julie Felix found herself in Britain smack dab in the middle of the folk revival in the mid-'60s, and with her serviceable voice and exotic good looks, she was soon a poster girl for the U.K. scene itself, releasing an album a year for Decca Records between 1964 and 1966, all three of which are collected here in this two-disc set. Felix wasn't Joan Baez or Judy Collins, however tempting it might be to make those comparisons, and her albums sound a bit like live sets tracked in the studio, with little embellishment, giving them at times a kind of a those-were-the-days documentary feel. Felix's faintly husky voice sounds fine but gets a bit generic, and the same could be said of her guitar playing, and she sounded pretty much like a thousand other female folk singers on the scene at the time trying their hand at "The Riddle Song."

But what Felix did have was a fine ear for recognizing a good contemporary folk song, and these three LPs are full of songs by the likes of Bob Dylan, Ian Tyson, Tom Paxton, Phil Ochs, Donovan, and Bert Jansch, among others, as well as several selections from the Woody Guthrie songbook. Nothing here really sets the world on fire, but Felix rises well above the ordinary on versions of Jansch's "Needle of Death," Tyson's "Someday Soon," and a jaunty take on Donovan's "To Try for the Sun," and she's never less than pleasant on more traditional fare like "The Maid of Constant Sorrow" or "The Riddle Song." In the end, though, she's more of a flashback to a particular time and place than she is an enduring folk icon, which doesn't diminish what's here, but it hardly makes it essential, unless, of course, you really want to hear "The Riddle Song" one more time. A timepiece.
by Steve Leggett

Sequenced back to back across this double-disc set are the self-titled solo debut and the imaginatively-titled The Second Album and The Third Album, which first introduced and, then, consolidated Julie Felix as a permanent feature on the British folk scene from the mid-60s onwards.

Recorded with pared-down production while Felix essentially lived in exile in the UK, these three Decca albums mostly showcase her as an interpreter of originals by the likes of Bob Dylan, Woody Guthrie, Phil Ochs, Donovan, Leadbelly and Peggy Seeger. As such, they reflect the sprit, sentiments and aspirations of the Civil Rights movement transplanted to mid-60s Britain. Though The Third Album was little more than a collection of outtakes from the first two, compiled by producer Hugh Mendl, it did include her hit version of Tom Paxton’s Going To The Zoo, arguably still her most recognisable song.

Following her sojourn with Decca, Felix moved to Fontana and, later, to RAK with Mickie Most. It’s these three albums that remain her most essential recordings.
by Grahame Bent 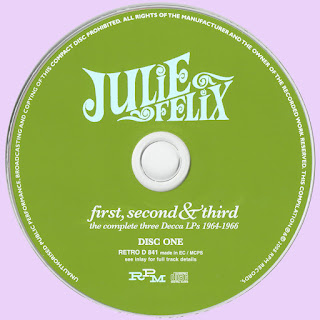 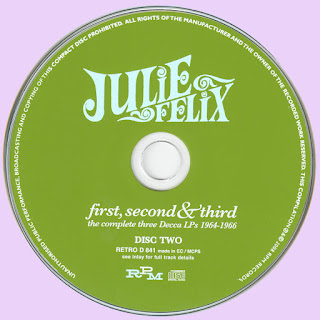 Free Text
Just Paste
Posted by Marios at 8:16 AM 8 comments: