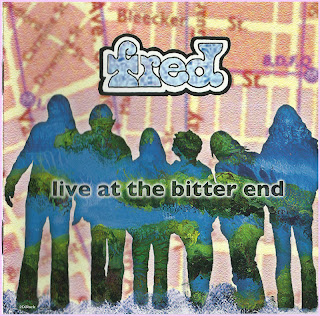 "The group as a whole Is to these ears more enjoyable than either the Mahavlshnu Orchestra or the new Billy Cobham band. In fact they are providing the kind of solid rhythmic electric music that I didn't think existed In pop circles anymore. Even the Bitter End, under Interim management, seemed more congenial than usual. Any band that can do that must be all right,"
by Peter Occhiogrosso, August 1.1974

Ironically, the legendary music club in New York City called "The Bitter End" Fred played in summer 1974, for six consecutive weeks, twice a day. The bitter end of the band came a few months later. Some of the concerts at the Bitter End were recorded clearly what it World In Sound enabled at its third Fred CD to present a part of it.

"This album contains the best performances from that summer" is because in the booklet to "Live at the Bitter End" to read. Apparently, the makers of the disc have proceeded extremely critical in the selection of numbers. Only a good forty-five minutes of material they deemed good enough to be published. For all I could have the CD still can fill a half-hour with a few inferior pieces. Perhaps, however, was also the sound quality of the other shots clearly worse or the redundancy is too high (at the frequency of occurrence have Fred sure every night pretty much played the same), who knows?

The sound of "Live at The Bitter End" is very good, maybe a little bit dull, and the mix is ​​not always perfect, but for a not for publication recording from the 70s the whole thing sounds all in all, excellent. Sun right live atmosphere is going to give up. Audience and applause is not heard (maybe played fred largely empty stands) and the pieces are separated by showing and hiding from each other. So the whole thing is more like a live studio session.

In musical terms, Fred arrived here quite the jazz-rock. Dominated by David Rose on violin, the band rocks very punchy and varied meaning carried by the doubly occupied key department (Farfisa organ and electric piano), Joe DeChristopher on the electric guitar and the driving rhythm section. Of necessity, simply because of the almost identical cast, you have to think of the Mahavishnu Orchestra, but the music of Fred was somewhat simpler and more relaxed.

A few symphonic-progressive, easy-affected Canterbury rudiments round out the music and give it a personal touch. The above referenced by Christian King Crimson but I can not really find in this music. All in all, Fred here a playful, very colorful, ultimately, very typical of the middle 70's jazz-rock with which they were moving, but certainly in the top class of comparable bands of the time,the sound is fresh, dynamic, punchy and clear. It dominates a nervous electric violin, but also electric guitar and Farfisa organ, giving the sound a psychedelic accent yet come to bear. Bass and drumming are impulsive, groovy and nuanced. This is also true for the sound of instrumental rehearsed, brimming with power plays overall.

Of the three Fred-albums "Live at The Bitter End" is the least original, although the group is the most professional and the most perfect to swing here. You can hear in the music that it is well-oiled live improvisations.
by Adamus67 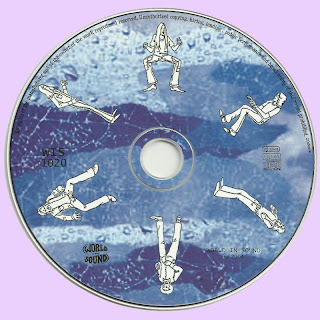 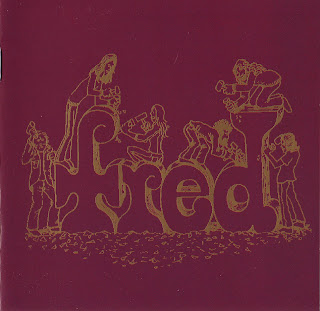 The experience that what was Fred, goes beyond what will be said here, as the music made by the band in the years 1970-1974 goes beyond the tracks of this album. The hope in these words is to give a little historical context to the music being published here, for the first time in a collection more than thirty years after it was first recorded.

Ken Price and Joe DeChristopher began playing together while students at Bucknell University in Lewisburg Pennsylvania in 1967. Ken played keyboards, mainly a beat-up electric Wurlitzer Piano. Joe fancied himself a guitar player, but took up Bass to play in Ken’s Band “Still at Large”. When the lead Guitar player dropped out late in 1968, Ken and Joe stayed together, adding John, a young Bass player. Unfortunately, John’s freshman roommate, Bo Fox, had been snatch up by another popular fraternity dance hall band, “The Gross National Product” a trio of Bo on the Drums and two upperclassmen on Guitar and Keyboards.

While the drumming set was not well filled, Joe and Ken thought they could also use a vocalist to help out. Their classmate Gary Rosenberg self-styled poet and disc jockey at the college radio station, steered the to David Rose recently back at Bucknell after a tour of service as a conscientious objector (running a Quaker related home of disadvantaged youth in a tough part of Paris). David made a great contribution as a stager and frontman, keeping quiet the fact about that he’d been trained to play the Violin, which he started doing at the age of six.

The band known occasionally as “David Rose and his Orchid” or “Mustang Turfbinder and the Swelltones” was improving but still need help on the Drums. Help came in the autumn of 1969, when Bo’s GNP band-mates had graduated and left town, leaving him available. Again with an assist from Gary, Ken, Joe, John and David, now willing to try the Violin in the context of improvisational Rock ‘n’ Roll, matched up with Bo. Amidst the belated arrival in small-town, rural America of blossoming counterculture of Peace, Love and drugs, a wonderful musical experience was born.

Gary continued part of our experience, as a friend an source for new music from the likes of The Band, Procol Harum, Traffic, Jethro Tull, King Crimson and Frank Zappa to name a few. We spent the month of January 1970 intending to write a hundred original tunes, a task at which we failed miserably. Even so, we knew that there was something special happening, and as young and as inexperienced as we were, there was a growing will among us to keep with it.

School ended for most of us either by choice or by graduation in May 1970, but we stayed together most of us living in either of two small harm houses about 4 miles west of town. John transferred to a school in Boston, and we accepted into our ranks of ex-collegians, the outsider Michael “Bones” Robinson, self made bass player and song-writer.

We spend the summer smelling honeysuckle along the banks of the Susquehanna, on those trips back from high schools and bars to the south, near Harrisburg and York, we later spent our time building a house out of a barn for David’s family to live in (after his apartment was ruined by flood of 1972), learning to play, to write and manage on our shared income from playing music.

We attracted diverse collection of friends and well-wishers along the way, including artist/photographer L.J. Kopf roaches Roger Brown and Pat Biggs, sound engineer Charlie Bozenhard (who put together the components of a system to amplify David), Folk musicians Tom Patten and Ira Packman (who opened for some of our concerts), a group of ex-students who became carpenters working as “Grassy Flats” and many others, too numerous to mention.

By late 1971, we'd worked up several original tunes (most of them included on this album.) We managed to produce a 45 rpm single, containing "Salvation Lady" and "a love song", both with lyrics from Gary. David preached the vision of a self-sufficient community of artists, self supporting and true to itself. Gary continued to write poetry, much of which was never put to music. LJ took pictures, designed posters, and showed slides at our concerts.

Everyone took a role in the life of the band, on and off the' stage. We covered Procol Harum, Frank Zappa, Jethro Tull and Mahavishnu Orchestra, enlisting the talenls of wunderkind Peter Eggets on piano, drums when Bo took a break, horn arrangements, and a work ethic we’d never found on our own. Up into 1973, we were existing on the outside of a society in generational turmoil, enjoying our role as outsiders, defiant that hired us, and the booking agents who tried to make a dollar in marketing us.

Even so in those early years especially, we were more than the music, and bigger than the sum of our parts. With the eventual addition of Peter as a full time member of the band, came the departure of Gary, and ultimately later on the dissolution of the band, but alas, that is not the story of the music on this album.

Enjoy what is here, know there is more recorded Fred music to come, and that what is recorded here, while standing on its own merit, was also a part of the seasoning process which led to the music made later under the influence of the formidable composing and arranging skills of Peter Eggers. Welcome to the first recorded music of Fred.
By Joe DeChristopher (Lewisburg Pennsylvania) 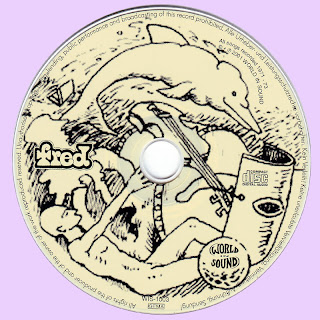