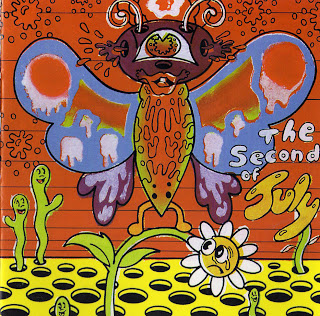 "I sang like a complete prick - a quivery, frightened little jerk," exclaims Tom Newman with a look of despair. "It's totally obvious to me why our LP didn't impress anyone. It's fucking terrible compared to what we were capable of." Tom can't understand why copies of his JULY album sell for 250 Pounds. Recorded in a panic-stricken weekend early in '68, "July" was a rush-job, thrown together by their low-budget label Major Minor, in the vain hope of cashing in on the success of the BEATLES' "Sgt. Pepper", issued almost exactly a year earlier.

Tom's old colleague, Jon Field, agrees: "It's cringingly embarrassing. I'd prefer to forget about it, to be honest! We weren't given enough time." Poppycock! "July" is a psychedelic classic, overflowing with inventiveness and imagination. "My Clown" and "Dandelion Seeds", which were coupled on the band's first single, contain all the exotic ingredients of the best in British psychedelia. Newman's dreamy other-worldly melodies drifted alongside some wonderfully eerie keyboards, and fuzz guitar passages that'd make your hair fall out. Aside from a couple of dated pop whimsies, "July" was a corker - a little tentative and strained at times, true, but a glorious Technicolor explosion of an album nevertheless.

Despite its obvious qualities, little is known about "July". It sold a measly number of copies at the time, and the band imploded almost immediately. Tom's place in rock history was later sealed when he set up the Manor recording studios for Richard Branson, first working on "Tubular Bells" before carving out a solo career. Jon Field, meanwhile, formed JADE WARRIOR (see and listen to our CD "JADE WARRIOR - Eclipse") with fellow JULY member Tony Duhig. Meanwhile, "The Second Of July" or "The 2nd Of July" presents a collection of home demos recorded by Tom back in 1967, which offer a glimpse of how - to his mind - the band's "Sgt. Pepper" might have sounded.

If you, too, want to create your own psychedelic masterpiece, just follow the same step-by-step career path. It's easy really... First were the TOMCATS (see and listen to our CD "The TOMCATS"). Then they were re-named JULY, replaced its bassist to Alan James and built a repertoire around the new songs Tom was writing in his Ealing flat. The next stage was to attract the attention of a record company. "We got involved with Spencer Davis Management," explains Tom, "and were spotted by a DJ named Pat Campbell, who pointed us out to the head of Major Minor, Phil Solomon.

We secured an album deal and the whole session was done in one weekend!" With producer Tommy Scott and engineer Mike Ross at the helm, the band seized upon every possible instrument, electronic gadget and studio trie k they lay their hands on, within the limited facilities of a Wardour Street studio (which later evolved into Trident) using the same equipment that “Sgt Pepper” was recorded on. Aside from Allen, who stuck to his Bass each member tried their hand on variety of instruments: Tom dabbled with the sitar, John Field played tabla as well as old congas. Tony Dug took occasional breaks from his fierce Lead Guitar passages to play organ and vibes and Chris Jackson also added some Keyboards.

The album’s release in June 1968 was promoted by a single coupling its two most commercial sides. Then the second single followed. But it was all to no avail. Major Minor failed to promote the album and none of the band's release sold more than a hand full of copies. Under the cloud of disappointment JULY called it a day. Meanwhile, interest in JULY has blossomed since psych specialists Bam-Caruso reissued their album in 1987. And now there’s 'The Second Of July". "I didn't realise how awfully nervous I was on the LP until I heard these demos," admits Tom. "I left the tapes in this trunk of junk in Mike Oldfield’s garage! Not all the tracks were chosen from the final LP.  A whole bunch of demos were done over a few months - I tended to record them myself because Pete Cook and I wrote the songs, and then we’d present them to the band”.

Most of 'The Second Of July sounds radically different and somehow more mature than the Major Minor LP. "Dandelion Seeds" has a far more complex rhythm, for example The stinging guitar work strewn across the resulting LP is lacking, but there's a wonderfully confident atmosphere. The exclusive material is fascinating too from the shiny psych pop of ' The Stamping Machine" and the romantic Syd Barrett-like whimsy of "The Girl In The Cafe" to the pleasant acoustic nature of "Look At Her” (File under "Waterloo Sunset” era KINKS) and the singer/songwriter styled "Man Outside", the only track over three minutes Tom's biographical pack notes that he’s produced dozens of records, with accumulated sales of over 5O million world wide.


"July" probably sold only few hundred of this mammoth total, and yet it stands as the one of the ultimate psychedelic artefacts of the late ‘60’s. But then music quality and sales quantity rarely go hand-in-hand – aside from “Sgt Peppers” that is.
Still
ENJOY OR LEAVE IT 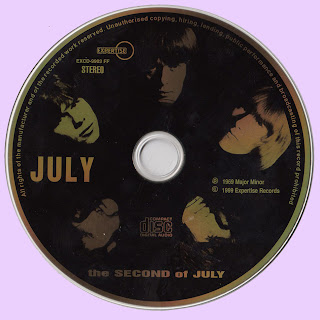 Free Text
Just Paste
Posted by Marios at 7:23 AM 18 comments: