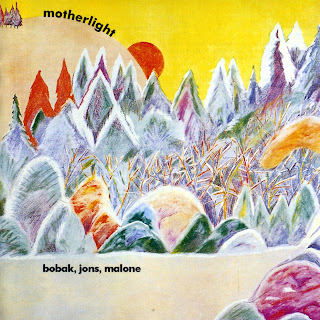 One of the most curious developments in the record collecting world over the last two decades has been the astonishing rise in values of late 60s/eorly 70s UK progressive and psychedelic albums, which were transformed almost overnight from bargain bin fodder to bank loan status. This was particularly true of the various independent releases of the era, which rapidly became known in the trade as 'private pressings'.

In this bizarre Alice Through The Looking Glass world, familiarity was spurned and obscurity become positively desirable: a fifth-rate, fifth form impersonation of the Incredible String Band, invariably limited to a tax-exempt pressing of 99 copies, escalated in value almost daily while the original ISB albums went untouched. The irony of this situation, almost inevitably, was that the identities of some very successful people were hidden away in the Xeroxed small print on the bock sleeve.

The Forever Amber album (current value: £1500) included Chris Barren, who went on to contribute keyboards to George Michael's chart-topper "Careless Whisper", while another English psychedelic band, Complex, featured Steve Coe, later a member of 80s hit makers Monsoon and one of the stalwarts of WOMAD. Perhaps the most successful of all the 'unknowns' who cut a highly coveted album in the late 60s, however, were Bobak Jons Malone - not a group of solicitors, but three backroom boys at the Morgan Sound Recording Studios in Willesden, London.

Their sole album Motherlight emerged in 1969 and promptly disappeared again, leaving another generation to discover its idiosyncratic charms (by which time, of course, the price tag had increased alarmingly). The genesis of the Motherlight album can be traced back to the mid-60s. Monty Babson, an old-fashioned crooner who'd been recording as a solo act since the 1950s, hod crossed over to the other side of the fence: establishing his own publishing company, Morgan Music, he also worked as one of the independent producers based at Denis Preston's lansdowne Studios in Holloway Pork, London, licensing completed masters to the major labels.

During the mid-60s Babson produced recordings for, amongst others, the Barron Knights and Shawn Phillips, though freakbeat connoisseurs will doubtlessly prefer to remember his production work on the Shots single "Keep A Hold Of What You Got". By the summer of 1967 Babson was working with on outfit called Orange Bicycle, whose mainmon was Wilson Malone - a multiinstrumentalist who could write, sing, produce and arrange with equal dexterity. Malone's emergence as a creative force coincided with Babson's desire to set up his own autonomous little empire, and by early 1968 he had founded the Morgan Sound Recording Studios. Surrounding himself with familiar faces,

Babson utilised such studio autocrats as Malone and the similarly accomplished all-rounder Danny Beckerman, while the Shots' psychedelic incarnation, the Smoke, were employed pretty much as the Morgan house band. As well as continuing to licence material to the likes of EMI, Babson had established the Morgan label, a predominantly MOR outlet that also released idiosyncratic efforts by organist Jerry Allen and jazz fusion outfit the Gordon Beck Trio, though the strangely strange- but oddly-normal 1968 album Funnysad Music (credited to the Wilson Malone Voiceband) succeeded in muddying the waters between MOR and the avantgarde.

By the end of the year, however, it was obvious to even the rather staid Babson that, though the album market was beginning to take over from the traditional singles scene, it was the nascent progressive and underground bands who were capable of making the serious money. Babson's response was to introduce the Morgan Blue Town label, which was to cater for the left-of-centre rock and pop audience. Danny Beckerman was entrusted with the nurture and development of the Pussy Plays LR cut by the Hertfordshire/London band Pussy, while a folk/pop crew called the Academy were called in for the album Pop- Lore According To The Academy. The third Morgan Blue Town album, however, was a sfrictly internal affair. With Chris Blackwell at Island making good use of the facilities at Morgan, staff engineers Mike Bobak and a teenage Andy Johns (younger brother of Stones producer Glyn) were already experienced studio hands. Equally relevantly, they were also accomplished musicians.

Bassist Johns had helped out the likes of Spooky Tooth and the Deviants, while Bobok hod previously been guitarist with a London-based band known at various times I as Fogin and the End (not to be confused with the Bill Wyman-managed group of the same name). "We played Kingston I Polytechnic two or three times with the Sweetshop, who later shortened their name to the Sweet", remembers Mike. "They asked us to support them at a gig in the Midlands - Birmingham, I think - but we couldn't, because the guy whose van we used for transport needed it to go to work! With Wil Malone on drums, keyboards, vocals and songwrrting duties, Bobak on guitar and Johns (not Jons, despite the spelling on the album!) contributing bass as well as performing various feats of studio trickery, the ad hoc studio trio agreed to create their own Morgan Blue Town long player.

"Monty Babson had a deal with Wil Malone", recalls Mike Bobak, "and it went from there. The album was definitely a low-key thing, really just us having fun. We used dead studio time late at night to record the music, and part of the agreement was that we lost ail rights to the frocks as soon as we created them. But that was alright – the album wasn't going to sell a million, though someone did tell me that it reached the charts in Holland." The opening track, "Motherlight", set the mood for the entire album. Obscure, almost literary lyrics (the title had been taken from James Joyce's Ulysses), a dominant piano leitmotif, breathy vocals low in the mix, some frustrated guitar hero fretwork and an eerie studio vibe coalesced to confirm that, though Malone was ostensibly the prime mover, this was a collaboration in which all three members played their part.

"On A Meadow-Lea pinpointed the trio's sound to somewhere between Procol Harum and the early Floyd, with some more fractured wordplay, heavy-lidded vocals and monstrous fuzztone guitar, while the tight little rocker "Mono Lose was offset by some gently spiralling vocals and a continuation of that weird but impressively unselfconscious lyrical imagery ("thimble full of empty grooves"?!). With its references to "smiley smiles* and "you'll see a hero rise as every villain dies", "Wanna Make A Star Sam" (possibly aimed at Babson, who owned a company called Mr Sam?) narrowed the imagery down to suggest some obscure Beach Boys homage, though anyone who'd been following Malone's work with both Orange Bicycle and Wilson Malone's Voicebond would hardly have been surprised by his admiration for Brian Wilson.

Next up was "House Of Many Windows", which built from a dramatic opening (very similar, incidentally, to the first few seconds of the Kaleidoscope single "Flight From Ashiya") to a fully-fledged psychedelic/progressive crossover epic, with more evocative lyrics and another deliciously non-sequitur piano break. By way of contrast, the Andy Johns-penned "Chant" featured an almost Pythonesque opening before developing into swathes of white noise, then switching again to a hypnotic, repetitive chant. Generous amounts of phasing and backwards tapes confirm the period piece nature of this track, which featured fellow Morgan engineer Robin Black on backing vocals. From its mock-country opening, "Burning The Weed" was a clearly tongue-in-cheek tale of stoned hillbillies that had wholly unexpected repercussions three decades later.

"A couple of years ago I played the track to my nephew, who's a club DJ", laughs Mike Bobak. "It gave him the inspiration to write a song called "I Don't Smoke" which, after he recorded it as DJ Dee Kline, became a UK Top Ten single." "Burning The Weed" was pure light relief compared to the ominous, unsettling closing track "The Lens, which sounded like Procol Harum on downers. The second half of the song acted as a precis of the entire album over Malone's ponderous, quasi-classical piano motif, thereby reinforcing the impression that Motherlight was a unified, fully cohesive body of work.

Motherlight duly emerged in the summer of 1969, but without a band to promote it, the Morgan sales team were facing an uphill struggle. The album came and went: Wil Malone continued to involve himself with Morgan and Orange Bicycle, recording a solo album for Fontana in 1970 before becoming on integral part of late period Smoke. After orchestrating the Who's Tommy in the mid-70s, he has enjoyed more sustained success over the last few years as the highly-respected producer/arranger of such acts as Iron Maiden, Simple Minds, Massive Attack and the Verve. Mike Bobak, meanwhile, continued to work at Morgan, though he was briefly sacked by Monty Babson after one of his charges, Quintessence, set fire to a studio piano!

He later settled his differences with Morgan's boss and returned to the fold: his work at Morgan and various other London consoles like Olympic and IBC encompassed acts of the calibre of Jimi Hendrix, Paul McCartney (specifically the superb "C Moon" single), Led Zeppelin (actually a mixing session with Jimmy Page), Cat Stevens, Donovan, Lou Reed and no less than five Rod Stewart albums, including Rod's breakthrough LP Every Picture Tells A Story. He eventually quit as an engineer in 1982 after working with Rick Wakeman.

Andy Johns also continued at Morgan, where he followed in the footsteps of his elder brother by working with the Stones ("my first session with them was at Morgan - they came in to do a version of "You Can't Always Get What You Want", which was a disaster, so they went to Olympic and did it properly"). He also worked with Led Zeppelin ("I don't know why they chose Morgan - it certainly wasn't to work with me!"), Jethro Tull, Free and Van Halen, as well as acting as joint producer for the astonishing debut LP from Television, Marquee Moon.

Still, it's a fair bet that none of the releases featuring input from Mike Bobak, Andy Johns and Wil Malone are worth the sums of money attracted by original copies of Motherlight, which now gains its first-ever, long-overdue official CD release.
By David Wells, With thanks to Mike Bobak 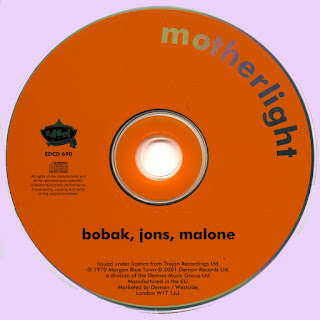