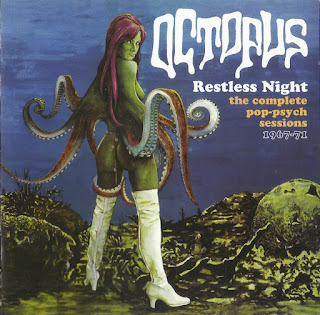 As put by Stefan Granados in the accompanying liners, “perhaps due to it being recorded at the fag end of the psychedelic pop years in 1970, or the ghastly illustration that graced the sleeve”, Octopus’ sole album still remains unheard of by lots of those who would’ve treasured it, had they been digging a bit deeper under the hostile surface … had they ever came across it at all.

Though it’s already been given a second chance actually, by See For Miles in the mid 90's, this is surely the definitive, and most certainly the first ever complete version of Restless Night, including the previously omitted pair of ballads, with I Was So Young being an almost Victorian-sounding piece of British folk, with a fragile Blunt-stoned vocal delivery, and Orchard Bloom already kinda suggesting McCartney’s post-Beatle days.

While we’re at it, there’s quite a few other kinds of Beatlisms, be it the Macca-by-way-of-Emitt-Rhodes sounding I Say and Rainchild (a formula already applied on some of the pre-album recordings like Call Me A Fool and especially Turning Night Into Day, as well as the pre-Octopus Cortinas’ single sides Girlfriend/ Laugh At The Poor Man), the Lennon-like proggy blues of the title tune, or Council Plans, finding them halfway between the Pepper-ish groove and The Turtles’ sunshiny harmony pop.

On a rare occasion when they tend to rawk out a bit harder, it usually comes out pretty close to the above concept, in a more Badfinger-like way, most audibly in the fuzzy opening The River, there’s also some tasty slightlydelic guitar lines, keeping Summer from it’s almost classic bubblegum chewy ness.

Thief sounds like a rather nervously (in a good way) upbeat rendition of an imaginary Graham Gouldman tune, Queen And The Pauper is a kind of a lightweight type of Britsike, while the epic closer Tide, though still sticking to the album’s highly melodic concept, also combines it with a progressive structure, being more in accordance with the album’s contemporary surroundings.

Besides the already mentioned pair of pre-album recordings, worth of mention are some other previously unreleased Cortinas recordings as well, such as the happy-go-lucky pair of the Vaudeville-ian ditty Phoebe’s Flower Shop and the Hermits-sounding Too Much In Love.

Seems like it’s about time for Octopus to fully spread his arms around the popsike world.
by Garwood Pickjon, October 25, 2006 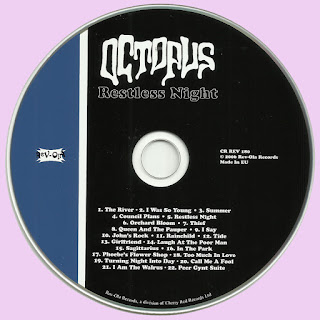 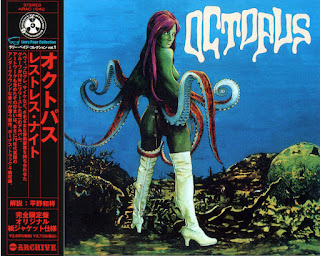 Octopus’s sole 1969 long-player Restless Night is something of a treasure among ’60s Brit-psych fans due to its mixture of proto-progressive riffs, accomplished pop tunes and sparkling Beatlesque flourishes. The band evolved out of the thriving Hertfordshire beat scene that also gave us The Zombies, The Gods and those other cult pop-psych heroes Forever Amber. Octopus’ music was coloured by the use of keyboards and layered vocal harmonies in much the same way.

As The Cortinas they enjoyed several years of local success which culminated in the 1968 CBS single ‘Phoebe’s Flower Shop’. The single was pure pop confectionery and betrayed little of the band’s tight, melodic brand of rock. By the time they’d been signed to Larry Page’s Penny Farthing label in 1969, their sound had expanded to encompass the burgenoning progressive scene, the dawn of the solo troubadour and the omnipresent influence of The Beatles, illustrated perfectly by their live sets of the period which included songs by Yes, Neil Young, Cat Stevens and even note-for-note renditions of “I Am The Walrus” and “Baby, You’re A Rich Man”!

The first single and album opener ‘The River’ is a tough dancefloor groover complete with lysergic fuzz guitar and has appeared on several compilations while the album cover art is an eye-opening classic of the “so bad it’s good” school. Much to the band’s horror, they discovered that Page had released a bastardised version of the album which omitted two of the original tracks and added the b-side of the single. Previous re-issues of the album have, not surprisingly, stuck to the erroneous tracklist but here at Rev-Ola we always strive to give you more. And you love it don’t you, you little beauties? So here it is pop pickers, for the first time EVER, the original version of the Octopus album as the band intended… containing two previously unheard (and uniformly excellent) tunes plus the usual plethora of previously unreleased bonus tracks, single sides, demos and even a mind-blowing contemporary live recording of Grieg’s ‘Peer Gynt Suite’! You better believe it daddy!
by Michael Kearton 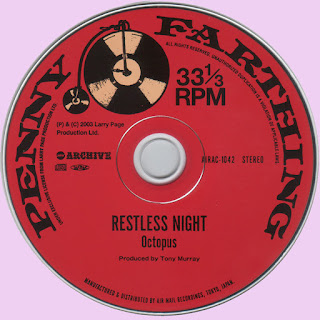 Free Text
the Free Text
Posted by Marios at 5:57 AM 5 comments: