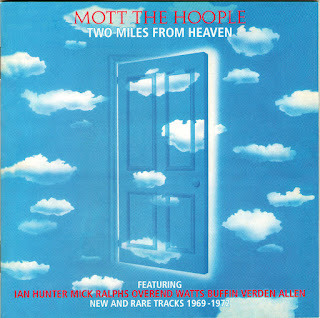 After British Lions broke up, Dale Griffin (and Morgan) went in the studios to put together this compilation of rare and unreleased Mott The Hoople material from Island's vaults.  Mott recorded virtually everything they wrote, and just about any day not spent gigging was spent in the studio.  As a result, there is a lot of unreleased (and unfinished) material in there.

What an absolute peach this collection is. Unreleased tracks, rare b-sides and early versions of songs that would be recorded later on... this album has long been sought after by fans,  and is now at long last available on CD.

It starts with a rare vocal version of the Kinks' You Really Got Me.  Next up is Ian's first stab at social commentary, Road To Birmingham which was the b-side to Rock And Roll Queen, Mott's first single.  Then there's the alternate version of Thunderbuck Ram, with Verden's organ featuring much higher in the mix.  The studio version of Keep a Knockin' is fast and furious, and an absolute belter.

Movin' On is next - slated for the original vinyl but withdrawn at the last minute is a medium-paced rocker that Mick Ralphs would eventually re-record with Bad Company.  Ride On The Sun is beautiful - this again would be re-recorded (as Sea Diver) later on - and is possibly one of Ian's best ballads.

Growin' Man Blues is another fast rocker which I never grow tired of hearing.  Till I'm Gone is another ballad, beautifully sung by Mick Ralphs (for a version of him sharing the vocals with Ian, check out the Anthology).  One Of The Boys is an acoustic version of the song that would be re-recorded later on.  Black Scorpio (Momma's Little Jewel) is faster than the version that would be recorded for the Dudes album.

Two more bonus tracks close the album, The Debt (which was the b-side to Midnight Lady) and the non-LP single Downtown,  with Mick Ralphs again supplying the vocals for this Neil Young/Crazy Horse cover.

As always with Angel Air, packaging is excellent with excellent and informative sleeve notes by Dale Griffin. Sound quality throughout is excellent (a lot better than the original LP).  Strangely, tho' the running order on the Bald At The Station side is different from the original LP.  No matter - this is an important album in Mott's history.
Hunter-Mott 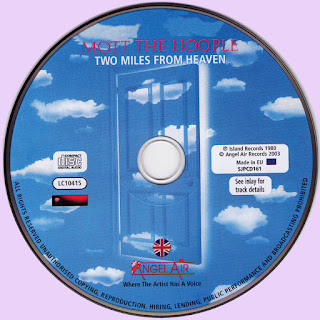