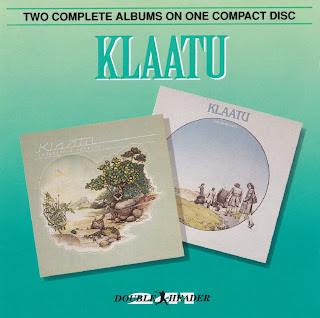 In 1976, Capitol Records in L.A. signed a three record deal with a totally unknown band, sight unseen. The band, Klaatu, demanded not to appear in public, play live or give interviews to support the album. In fact, nobody at Capitol even knew who the band was.

This was unheard of in the music industry, but Capitol felt this progressive rock band from Canada had presented them with one of the finest albums they had ever heard. Their first record, simply entitled 'Klaatu' – released as '3.47 E.S.T.', in Canada — contained no names, photos or clues to the identity of the band members. All writing and production credits were given collectively to Klaatu.

They had spent three long years experimenting at night in the recording studio owned by producer Terry Brown (Rush, Max Webster) and Doug Riley (Dr. Music) to complete an album filled with creative new sounds and innovative techniques. To them, the studio was a fourth band member... and another reason why they didn't want to tour.

Although there were initial comparisons to The Beatles in the music press, plus Pink Floyd meets The Beach Boys, the band simply saw this as a compliment, since The Fab Four had been one of many inspirational bands to them since they were kids.

John is from the West-end of Toronto and attended York University's fine arts program. John first met Terry Draper at grade school in the early 1960s. They played in a number of bands together until 1967 when John left to get a head start songwriting and recording. In 1971, John and Terry formed the short-lived Mudcow, adding Dee Long as guitar player.

Their desire to play original music – and not tour the stripper circuit – led to Mudcow's demise. Then John met producer Terry Brown at a job interview… and Klaatu took flight.

However, to fully understand Klaatu and how events transpired, one must realize three key things about John Woloschuk: 1) His love of old black and white movies. 2) His passion for music. 3) His shyness. That's why his bio ends here.

Dee first met Terry Draper in 1968 when they played against each other during a Battle of the Bands competition. Determined to play his own original music, Dee left Mudcow when they were forced to do covers. So when John was given the opportunity by Terry Brown to play him some of his demo tapes, John invited Dee to play his demos as well.

Instantly recognizing their talent, Terry Brown invited them to record at Toronto Sound Studio during off hours. And the rest is history.

During the creation of Klaatu's five albums, Dee continued to develop his skills as an engineer and producer. Eventually leaving the band to focus on his own production studio -- later working with Sir George Martin at London Air Studios.

Dee now lives in British Columbia with his wife. He's created several CD's over the years, including his latest release Life AfterLife. Terry says he finally made it to the top – but only when he started his own roofing company!

The gregarious drummer joined his former Mudcow band mates in 1974, when John and Dee realized they needed a permanent drummer who understood what they were trying to do in the studio. Terry lives just north of Toronto with his wife.
Klaatu-theband 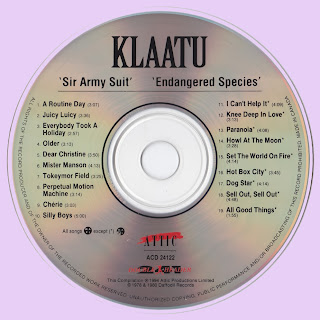