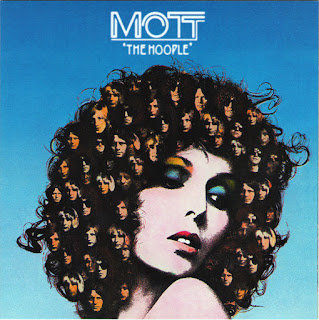 The Hoople was Mott's third album release on CBS/Columbia Records and the band had much to live up to after their two previous studio work outs. All the Young Dudes had taken the group in an exciting new direction under David Bowie's tutelage and the self-produced Mott was so strong that its sequel inevitably faced unjust criticism. However, there were some mitigating circumstances. Organist Verden Allen and founder/lead guitarist Mick Ralphs had both left Mott in 1973. The group considered Joe Walsh, Tommy Bolin and Ronnie Montrose as Ralphs' replacement but opted for Luther Grosvenor, who joined as 'Ariel Bender'.

These developments changed the character of the band quite significantly firstly because vocalist Ian Hunter was now the undisputed group leader, secondly because Grosvenor was not a musical collaborator as Ralphs had been and thirdly because Ian effectively became sole writer. But Mott's front man had composed some fearsome new songs and The Hoople marked a solid progression. In retrospect, the album deserves greater merit for the diversity and power of Hunter's material. The 'updated' top ten hit single "Roll Away the Stone" and its follow up, "The Golden Age Of Rock ln' Roll", closed and opened the LP, acting as bookends to the eclectic material within. In 1974 there was a strong UK lobby to limit the noise level at rock concerts to 96 decibels and 'Golden Age' was an expression of Hunter's annoyance but also a celebration of the glamorous and buoyant music scene that was thriving at that time.

Roxy Music's Andy Mackay contributed rousing saxophone to the new single and he also played to great effect on "Pearl 'n' Roy (England)", a tale of social and political frustration referencing the British Conservative Prime Minister of the time, Ted Heath. Mott was renowned for its passion towards guitars and cars. After "Drivin1 Sister" and "I'm a Cadillac" on the Mott album, bassist Overend Watts contributed "Born Late '58," a very credible rocker that Ian thought was a potential single at the time. It was the only Mott track not to feature their front man who was in America when the band cut the song Ian also extended his tales of New York City with "Alice" which trod in the tracks of Mott's "Whizz Kid". Hunter's lyrical outpouring on "Alice" was unprecedented and consequently the song was performed only once in concert. Morgan Fisher, Verden Allen's replacement, fitted the band like a glove, as exemplified by his fantastic organ playing on this cut.

"Through the Looking Glass" is unique in the Mott canon with its stunning dynamics and orchestral arrangement rising and falling dramatically behind Hunter's expressive vocals. "Trudi's Song", a beautiful ode to lan's wife, inspired by Dylan's Nashville Skyline album, is a gentle contrast to much of The Hoople's hard edge. With the headlines 'Fragments of Madness' and 'Hoople's Blood and Thunder', two British rock journals were clearly startled by Hunter's powerful and highly charged masterpieces, "Crash Street Kidds" and "Marionette". Echoing "Violence" from Mott, "Crash Street Kidds" tells the tale of a street gang who have become so socially disenchanted that they decide they are going to take over Britain. In the end, youth fails with lan's transformed 'dalek voice' and a 'machine gun' heralding the gang leader's demise. Originally conceived as "The Bash Street Kidds", it was to be the album's theme and title but the publishers of the Beano comic (which featured the Bash St characters) would not countenance Hunter's concept.

The cornerstone of The Hoople is unquestionably "Marionette", lan's five minute mini opera describing the corporate side of rock music and its effect on artists. Crazed violin, frantic saxes, staccato cellos, Quasimodo choruses and manic laughter surround Hunter's nightmare of a rock star driven to submission. Ian was often ahead of the field and within 18 months Queen had written a certain smash hit operetta and 'marionette' was used to describe David Essex in his portrayal of a fading pop star in the movie Stardust. Within nine months Ian Hunter would be confined to a hospital bed. Before then, "The Golden Age Of Rock 'n' Roll" hit #16 in Britain and The Hoople reached #11. Mott played a 6week American tour with Queen as support and became the first rock band to sell out a week of Broadway concerts in New York's theatre land. Hunter's acclaimed book Diary of a rock 'n' roll Star was also published around this time. It was a peak period for the group.

During The Hoople sessions the band recorded the reflective "Rest In Peace" and a further Spector-style single "Foxy Foxy" for summer release. In the autumn of '74 it was felt that Ariel Bender did not suit Mott as lead guitarist and in spite of his whirlwind energy and the renewed spirit he had injected into the group, Grosvenor left, turned down an offer to join Sparks and formed Widowmaker instead. Bender's replacement was the brilliant Mick Ronson whose recruitment by   Hunter was a masterstroke. 'Ronno' laid down guitar for a single entitled "(Do You Remember) The Saturday Gigs?" and an intended B side, "Lounge Lizzard". The self-referential "Saturday Gigs" was deemed a huge potential hit but it stalled inexplicably at #41 in the UK.

European concerts with Ronson were highly praised but there were increasing tensions in the band and Hunter's subsequent breakdown led to the cancellation of a sold out British tour. Mott ceased to exist. The Hoople is Mott the Hoople's final creative offering and one of their most under-rated albums lying as it does in the wake of Brain Capers, AH the Young Dudes and Mott. It is still a remarkable record and Hunter's compositions "Crash Street Kidds" and "Marionette" pointed the group in a new and exciting direction that sadly they were unable to follow. Little wonder that Ian had planned to feature a straight jacket on the cover of their next album. 'Fragments of Madness' indeed!
by Campbell Devine 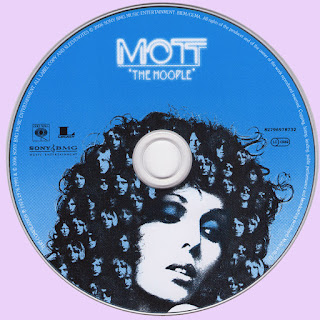