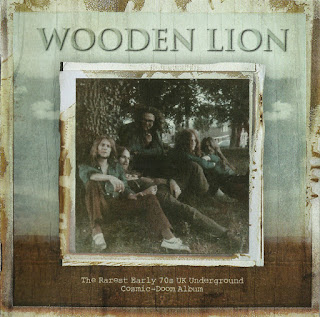 Recorded over forty years ago by the original five-piece band, these insanely rare Wooden Lion tracks have, regrettably, been locked away for an eternity - until now that is. This dastardly and calculated act of betrayal compelled us to free the beast once and for all. In fact it is our sworn and solemn duty at AA Towers to bring you the best and the rarest recordings from the UK Underground of the late 60s and early 70s no matter how challenging the task.

Not only was the vault securely locked but all keys were mercilessly destroved such is the breathtaking rarity of the sounds you are about to hear Mention the name Wooden Lion to most collectors of 70s prog and psych and more often than not you will be met with a baffled look.

For some though the name may trigger a garbled recital of weird and wonderful names; characters like The Captain, The Mad Molecule and Cardinal Biggies with tales of on-stage frippery and dark delight from long ago. The name fell into place when Roy Wood and Johnny Lyons disbanded Grope, their former band. The first Wooden Lion line-up comprised Roy Wood (electric guitar/6 and 12 string guitars), John Phillips (vocals), Johnny Lyons (bass), Gareth Kiddier (12 string guitar) and Wai Mansfield (drums).

It is this original quintet that was responsible for laying down the five tracks on this CD having been painstakingly re-mastered from a beyond rare acetate of which only one known copy exists. Housed in an adapted gatefold sleeve and customized to include rare pasted on photos and hand written lyrics the relic is an unsurpassed rarity.

As can be heard on these embryonic demos an early Hawkwind influence is apparent here and there whilst the gloomy vocal delivery is very much akin to the late 60s Basildon doom-metal merchants The Iron Maiden. Wooden Lion unleashed their melancholic theatrics and dark cosmic energy to captivated audiences across southern England on the pub and club circuit securing some useful support slots along the way especially at venues like the Dagenham Roundhouse where they opened up for SAHB.

By 1974 when the personnel had changed the band introduced some on stage gimmicks most notably a giant inflatable tube in a bid to gain increased attention not least from a record company or two. With appearances at various open air festivals including Windsor and Watchfield under their belts and another in a park in Basingstoke where they were banned due to excessive volume (yeah right), there was still no sign of a recording deal which only serves to make the earlier session in Hitchin all the more significant now.

A session incidentally whereby the studio operatives were proposing to enter the tapes into a competition. Heard that one somewhere before! As the line-up continued to chop and change the band experimented by bringing in a synth player namely Alan Essex aka Cardinal Biggies who had occasionally performed with Hawkwind but things finally petered out as the punk scene reared its snotty nose in 1976 by which time the only two original members left were Roy and long standing drummer Wal. Roy then changed his name to Weard and joined circuit band Dogwatch who signed to Terry Murphy's Bridgehouse label.

The gods may have denied Wooden Lion their forty minutes of vinyl glory first time around but four decades on you can at last trip out to the very rarest UK cosmic doom album of the early 70s. This is the original Wooden Lion my friends, rescued from oblivion for you.
CD Liner-notes Free Text
the Free Text
Posted by Marios at 8:10 AM 5 comments: