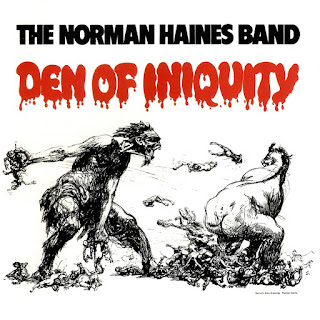 Keyboardist/singer/namesake Norman Haines started his professional musical career as a member of the Birmingham-based beat group The Brumbeats.  Following The Brumbeats' breakup Haines became a member of Locomotive, which cur a couple of highly regarded singles and the album "We Are Everything You See" before collapsing.  Haines then recruited lead guitarist Neil Clarke, singer/bassist Andy Hughes, and drummer Jimmy Skidmore for the band Sacrifice.

While the single did little commercially, Parlophone decided to finance an album.  With Tony Hall in the producer's chair, 1971's "Den of Iniquity" was recorded at Abbey Road Studios.  With namesake Haines and bassist Hughes responsible for the majority of material, the few detailed reviews I've stumbled across portrayed the album as having a dark progressive sound.

Only partially true and not a particularly accurate description.  Propelled by the combination of Haines'  blistering voice and keyboards and Clarke's fantastic guitar, the results managed to combine razor sharp hard rock, blues-rock and more commercial moves. You're probably scratching your head trying to figure that combination out, but the fact of the matter is songs like the ominous title track, 'Finding My Way Home' and 'Everything You See (Mr. Armageddon)' (the latter previously recorded by Locomotive) should have held equal appeal to top-40 radio and free form FM audiences.

Stylistically the biggest surprise was the pretty acoustic ballad 'Bourgeois'.  Written and sung by Hughes the track served to spotlight his folkie roots.  In contrast, side two found the band stretching out on a pair of largely instrumental blues-rock oriented numbers.  Less dynamic than side one, the 13 minute 'Rabbits' and 'Life Is So Unkind' served to spotlight the band's instrumental prowess, guitarist Clarke in particular getting a chance to showcase his first-rate playing.

With little support from Parlophone the LP didn't exactly burn up the charts, though part of the blame may have rested with the choice of art work.  The Heinrich Kley drawing was pretty stunning and some British retailers apparently refused to stock the album.

With the band calling it quits in 1972 Haines released a solo 45: 'Give It To You Girl' b/w 'Elaine' (Parlophone catalog number R 5960).  He was offered a spot in the newly formed Black Sabbath, but passed on it and then largely disappeared from the music scene though he appears to have returned to the fold fronting Norman Haines Blueskool.
Bad-cat 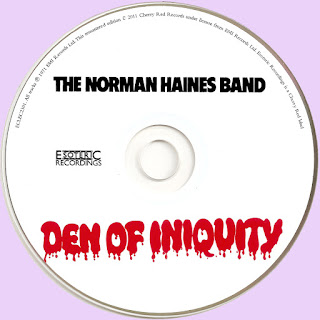