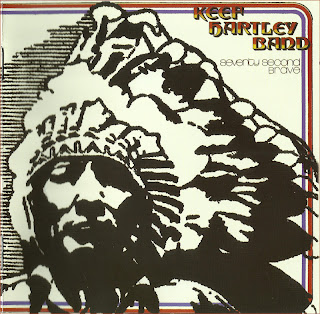 By the middle of 1971, I had five albums in the can, taken the band on endless tours and played at major festivals including the legendary Woodstock Festival in 1969. I suppose after all that I was getting ready for a change. At the end of 1971 it started to become clear that myself and Gary Thain were following a different musical direction to that of Miller Anderson, but all in a positive way.

Miller decided to pursue his solo career which, although it was a blow, left me the freedom to get together fresh musicians and essentially make a new start. I set about the task of searching for a great bunch of very different but nevertheless, musically like minded individuals. The gathering together of Junior Kerr on Guitar, Pete Wingfield on Keyboards, Chris Mercer on Sax (who was also a dynamite arranger) and Nick Newell on Sax was the result of that search.

The respect I had for Gary Thain was immense and to the extent that I made the one and only concession in my recording career. Gary wrote "You Say You're Together Now" and he was insistent that he should sing that number himself. I agreed that he could and, although I honoured that agreement, it wasn't the right decision musically. Saying it was a mistake makes it sound like I'm bitter about that decision which I'm not, but I always wanted the music to come first.

Pete Wingfield was the most tight fisted person I'd ever met! Whilst sailing to Oslo, we all bought and took seasick pills and we all threw up except for Pete who said "I've paid for it so I'm keeping it". Some months later he released a successful single on the Blue Horizon label called "18 with a Bullet" and every time I bumped into him at a session after that I used to sing "I'm 18 with a wallet - I can't get in there, you won't allow it." It was all in good humour.

Pete wrote "Hard Pill to Swallow" for the album that also showed off Chris Mercer's horn arrangements, which were both subtle and deep. Junior Kerr was an extremely mellow guy but as a performer he always wanted to be Jimi Hendrix; the ultimate alter ego chameleon. He contributed two songs for the album "Heartbreakin' Woman" and "Don't You Be Long". I'd always loved Chris Mercer's playing when  he was in John Mayall's Bluesbreakers. Chris was in the band at the same time as I was so we knew each other and it was great that he agreed to join my brand new 1972 band.

To get an idea of Chris's talented playing, listen to Roxy Music's "Let's Work Together" - the sax solo in that was Chris Mercer at his very best – he blows it to kingdom come! I knew Nick Newell through Zoot Money's Big Roll Band and one day he approached me and asked if I'd got any work, so I said "Yes, how do you fancy working with Chris Mercer?" and he said "Yeah, I'd love to". Those two got on like a house on fire and some of the brass arrangements were perfected by the two of them huddled together in a corner trying out different voicings for the parts.

As we all became familiar with what we were doing I got really excited about getting in the studio with this bunch of really talented guys. I couldn't wait! The album title was conceived as usual during the time frame of recording the album and as the year was very soon going to be 1972 and I wanted to keep the Native American theme alive, I came up with "Seventy Second Brave" in a moment of inspiration one evening on the way home from the studio. The album owes as much to John Burns the coproducer as it does to any of the players that were involved. I first met up with John Burns in the editing suite when he worked as an engineer whilst making our previous album "Little Big Band".

After that he decided to go into producing and had produced one or possibly two Genesis albums before I asked him if he would co-produce and engineer "Seventy Second Brave". On one track, (I'll leave you to decide which it is), we had Peter Gabriel and Phil Collins on backing vocals. You won't find them credited on the album as it was just a case of them strolling into the studio with John Burns and joining in for fun. A nice moment was when Phil Collins took me to one side and said to me "Do you remember the Mayall gig at Wellington Town Hall?" And I said "No" "Well", he said, "we came to see you and loved it because you took the piss out of your own drum solo." You see I was expected to do drum solos and the crowd loved them but I never liked them musically.

Anyway, the time was approaching when we were going to make the album so we all met up at John Burns' flat and brainstormed the songs making sure that each and every musician had a chance to input their ideas. We had at least half a dozen sessions like this. Not only was this good preparation for working on the album, it was a great insight into how we would work as a live band. We had two and a half weeks of studio time booked (excluded mixing). We played everything live but still used overdubs to enhance the performances. By now most other bands were starting to work in a different way, building up songs one instrument at a time.

This was all very well but often lost the interplay that you get when musicians are playing together in the same room. We all went in well rehearsed for the recording sessions but when we started gigging it was a different matter - we often had to adapt arrangements to suit the live performances until we were happy with them. Each session was around 10 hours each day over the two and a half weeks. We would possibly abandon a track when we were getting stale and rather than call it a day we would start on another, only to find the juices would start to flow again and reactivate the session with everyone queuing up to do their particular overdub.

Island Records studio was in Notting Hill Gate and we'd start sessions at around six o' clock in the evening until three in the morning and during the sessions we'd obviously get hungry. We'd give our minder and companion Dell Roll our order for a takeaway and he'd go out in the early hours into an area that, at the time, was problematic with black / white violence. As the only white man walking the streets for miles around; he used to be scared to death! After he got to know the guys in the Caribbean takeaways and they knew what he was doing he could relax a little more. Dell always used to take Blue, my Alsatian dog at the time, with him on these nightly vigils. Blue used to accompany me down to the studio and fall asleep, often in front of the monitor speakers.

No matter how loud they got (and John Burns would have them falling off the brackets at times) Blue stayed asleep throughout it all. "Seventy Second Brave" was released right at the beginning of 1972 and we toured almost immediately. That took care of the first part of 1972. I then took up the offer from John Mayall to join him on a European tour. I needed a rest and this seemed like an ideal opportunity - a busman's holiday. I've just listened to the album for the first time in a very long time and I must admit that on first listening I thought it was tight even by today's standards and still stands up today musically.

It reminded me of John Burns getting paranoid whilst miking up my bass drum and I could hear the perfect marriage of Gary Thain's bass and my bass drum that came about from this. We used to get everyone in the control room often after each take so we could all criticise the take and make suggestions so we could improve things with the next take. It reminded me why I enjoyed the music business so much - I got to work with so many talented people.
by Keef Hartley, December 2008 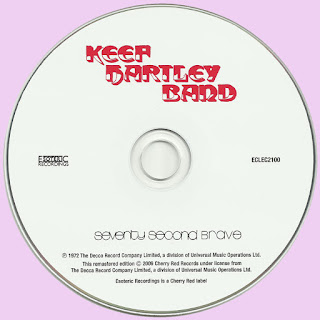 Free Text
Text Host
Posted by Marios at 5:42 AM 7 comments: