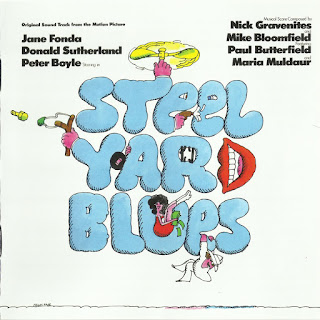 With a killer leading couple of Jane Fonda and Donald Sutherland—fresh from their box office triumph co-starring in Klute—and a soundtrack by the Electric Flag’s Mike Bloomfield and Nick Gravenites—with performances by Paul Butterfield and Maria Muldaur—you would think that the 1972 film Steelyard Blues would be better known than it is. Alas, the film was one of those only-in-the-early-‘70s countercultural romps that died at the box office; Fonda plays a call girl (again) who hooks up with Sutherland’s bumbling ex-con to restore a seaplane and attempt an escape from The Man breathing down their collective necks. Poorly reviewed and largely forgotten by film audiences, it has remained a cult classic because of its soundtrack, which marked Mike Bloomfield’s first release of any kind in three years, and reunited him with Gravenites, with whom he’d composed music in the Electric Flag for the soundtrack to Roger Corman’s B-movie classic The Trip.

Here, the emphasis was less on psychedelia than on a jaunty mix of blues, rock and country to match the shambolic goings-on on screen; there’s no mistaking Bloomfield’s stinging blues-rock licks for those of any other guitarist, and a pre-“Midnight at the Oasis” Muldaur serves notice of her impending superstardom. Completing the musical cast was Paul Butterfield, in whose band Bloomfield first broke into prominence, keyboardist Merl Saunders, later of course to collaborate with the Grateful Dead’s Jerry Garcia, and Annie Sampson of the Bay Area group Stoneground.
by Richie Unterberger. 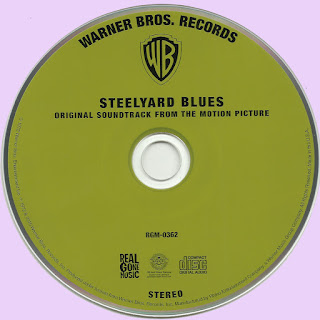 Free Text
Text Host
Posted by Marios at 4:02 AM 4 comments: