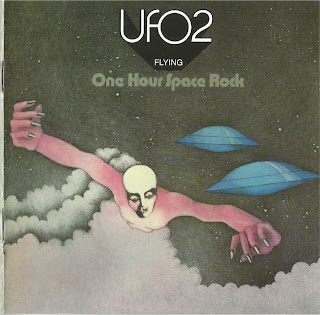 Who would have thought old Phil Mogg, Pete Way and Co. would be responsible for one the greatest psychedelic long players ever released?, but yes folks this record called "UFO 2/Flying" is a head trip of the highest order that every space rock freak MUST own!!!

UFO started out in 1968 and were at one time known as The Good, The Bad and the Ugly, they later called themselves Acid finally settling on UFO which was a tribute to the legendary UK nightclub. The group cut their teeth playing covers by people like The Yardbirds, Kinks, John Lennon and The Small Faces among others, somehow they got the attention of Equals guitarist Eddy Grant who was branching out into production and talent procurement, Grant invited the group to record at Orange Studios and the group managed to land a recording deal with the tiny Beacon imprint. A debut album "UFO 1" was issued in 1970 to little fanfare ( though it has been reported UK DJ Jon Peel thought highly of the group.)

The record we are talking about here was the group's second and their last for Beacon, it was known as "UFO 2/Flying/One Hour Space Rock" and it was issued in 1971. This is one monster of a Rock album that will appeal to fans of Free, Ash Ra Tempel, Blue Cheer, Taste, The Pink Fairies and many others, simply speaking it's awesome!!

Side One starts off "Silver Bird" which sounds just like Free circa 1969, Phil Mogg shows himself to be a gritty, convincing singer while guitarist Mick Bolton plays some blistering solos in the Paul Kossoff/Rory Gallagher vein, the group's rhythm section of Pete Way ( Bass ) and Andy Parker ( drums ) is a powerhouse, the song starts out slow but soon takes flight pummelling the listener along the way with relentless power.

"Star Storm" is in a whole different bag it begins with some lethal wah-wah guitar by Bolton then briefly touches down into a blues rock stomp ala Free/Taste, then the thing slows down to a crawl and slowly shifts into a guitar freakout that reminds me of the mid-section of The James Gang's "The Bomber" and also the guitar solo section of The Jeff Beck Group's "Rice Pudding", then it's off to Ash Ra Tempel land for awhile and then back again, the whole piece clocks in at over 18 minutes!!, Mick Bolton's guitar playing on this number is stunning!!.

The first side ends with a Groundhogs style raveup called "Prince Kajuku" that is absolutely fierce!, Mogg's vocals are sensational whlie Bolton blasts away like T.S. McPhee's kid brother, Pete Way also plays brilliantly on this one.

Side Two starts off in a different direction with "The Coming Of Prince Kajuku" this is an incredibly pretty guitar instrumental that echoes of Fleetwood Mac's Peter Green and Danny Kirwan's playing on the "Then Play On" album, then all of a sudden the song erupts into a Pete Townshend/Eddie Phillips Pop Art Afterflash! WOW!!!

"Flying" takes up the rest of the record, this one is a lengthy blues downer track that sounds like the group are suffering from a group hangover in the beginning the song then comes to life and turns into a pulverizing dose of Acid Rock. The record ends just under 60 minutes leaving you completely drained, in fact after playing this thing I need a bit of a comedown so I'm gonna go listen to The Four Preps "On Campus" album and then some Kingston Trio!, "UFO 2" has that kind of effect on people!!
by Dave Furgess 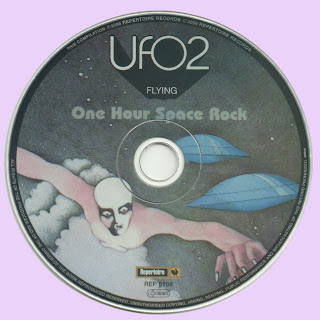 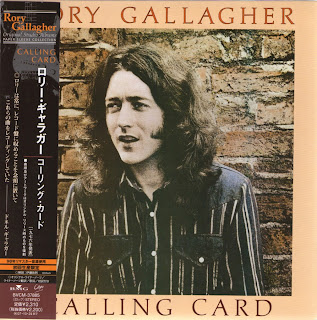 Rory's eighth solo album, "Calling Card", was recorded during 1976 at the famed Musicland Studios in Munich. All of Rory's previous releases had been successfully self-produced. For this album he was keen to find a producer who had an affinity with traditional rock values but was open to new ideas.

On his previous release, 'Against The Grain1, Rory had started to shift away from the blues/rock style he'd made his own, creating an album with a harder sound. He was keen this progression should continue but needed to find a producer who shared his convictions and could help create the sound he wanted. During the 70's 'Deep Purple1 were one of the most successful rock bands in the world and Rory had toured the U.S. with them. Roger Glover, Deep Purple's bassist, offered his services to Rory, seeming to be the perfect candidate to produce the album. They began work on 'Calling Card' in the summer of 1976.

The band, Gerry McAvoy on bass, Lou Martin on keyboards and Rod de'Ath on drums, added the final element to the 'creative1 mix. In the three years they had been performing together they had grown into a formidable band. As Roger Glover explained, "they all seemed very dedicated to Rory, there was an allegiance, bom of years of smoky clubs and endless journeys". This was the fifth and last release featuring this classic band line-up. Setting the tone for the album Do You Read Me starts with a sharp, rocking intro. highlighting the shift in Rory's musical direction.

Country Mile - The sheer exuberance and life of this excellent 'boogie woogie' inspired rock track, with it's infectious rhythm and slide guitar solo, is palpable. Moonchild - Is a perfect example of the production Rory was aiming to achieve on this album, marrying a traditional hard rock style with the melodic values of jazz. The track is full of tricky phrasing and intricate guitar work, which Rory delivers effortlessly. Calling Card - Rory's jazz influences and wonderful lyrics again shine through on this title track. The interplay between the guitar and the piano throughout the song is particularly pleasing.  When interviewed in 1995 Roger Glover nominated this as his favourite track on the album.

I'll Admit Your Gone - A hybrid, melodic track encapsulating folk/jazz in a blues fashion. Rory at his melancholy best.

Secret Agent - Rory's familiar hard rock sound of heavy beats, distorted riffs and slide guitar all come together impressively on this track. The funky rhythm and unison of guitar and vocal on Jack-knife Beat are reminiscent of 'Little Feat', a band Rory greatly admired.

Edged In Blue - Chris Wright, then head of Chrysalis Records, who originally released the 'Calling Card1 album', told Rory if this track was released as a single it would almost certainly be a number one chart hit in the US. In typical Rory style he decided not to release it as a single, leaving it as one of the outstanding tracks on 'Calling Card'.
from CD Liner-notes 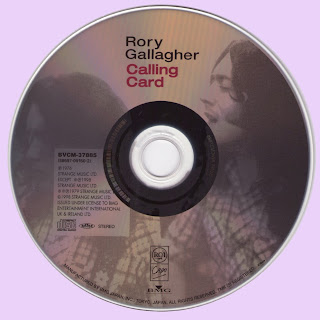 
Free Text
Text Host
Posted by Marios at 3:20 AM 3 comments: