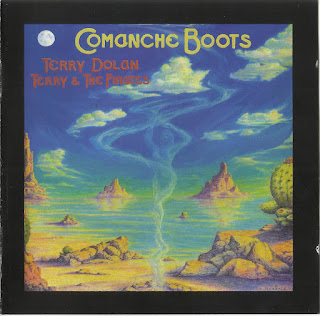 Like all good pirates that bury their treasure so they can come back later to bask in the glory of the fruits from their labors and enjoy the bounty of their success Terry And The Pirates would be no exception! Sitting amongst the fools gold, wooden nickels and thin dimes that were in the treasure chest that Terry and The Pirates' buried a long time ago were some real precious gems thought to have been lost forever. It was here that we unearthed the mother lode of tapes for which this collection of music was compiled.

Featured on "Comanche Boots" are a few of the last known studio recordings of Terry and The Pirates in existence, including never before released tracks, rare demos, rehearsals and exciting live performances. "Comanche Boots" is also in many ways a celebration of 35 years of rockin' with Terry & The Pirates. The aibum opens up with "The Cuckoo", the only recording from the Los Angeles version or T&TP with Terry Dolan and the original "Pirate" rhythm section of Hutch Hutchinson and David Weber (both originally from Copperhead) and featuring Johnny Lee Schell from Bonnie Raitt's and Ian McLagan's bands on lead guitar. On June 12, 1973, Hutch and David joined Terry along with John Cipollina and Greg Douglass the first time he ever played out with a band. This was the night that Terry abd The Pirates were born.

From the Fantasy Studio Sessions on 11-21-75, deep in the vault, we found some interesting outtakes - "I Can't Dance", "Nicky's Tune" and "Truer Than Blue". "Nicky's Tune" has some excellent rocking and rolling piano from Nicky Hopkins along with some great guitar licks from Greg Douglass and John Cipollina. (A live version of "I Can't Dance" appeared on "Silverado Trail"). By the way Silverado Trail has been recently reissued as Return To Silverado on Evangeline Records with bonus tracks and a bonus CD.

The "Pirates" never being ones to pass up on a good thing accepted a offer to go in to the recording studio with Freeway covering all of their expenses. At the time of these sessions, John was on a East Coast tour with Nick Gravenites, so Terry, Greg Douglass, David Hayes and Jeff Myer went in the studio and recorded the songs - "Yankee Son", 'Vain River" and "Sweet Emotions". It was always Terry's every intention to go back and add Cipollina to these recordings but unfortunately that never happened, but if you close your eyes and listen real hard, I think you can still hear him. This is the original version of "Vain River". Terry later re-recorded it on his album "Still A Pirate".

There is a live version of "Sweet Emotions" with John Cipollina on the album "Silverado Trail", but that version is without Greg Douglass, because he was on the road with Greg Kihn at the time. One of the problems of "The Pirates" was finding them all home from the road long enough for Terry to assemble them for a gig. On October 25, 1978 from a rehearsal for an upcoming gig on Halloween comes "Through The Willows", this is one of the few known recordings of this song. Cipollina was not present for this rehearsal, because he was busy preparing for a Halloween gig with the Novato Frank Band at the Inn Of The Beginning in Cotati, California. From the sessions for Terry Dolan's Acoustic Rangers album comes this great unreleased recording of Bob Dylan's "It Takes A Lot To Laugh, (It Takes A Train To Cry).

This unique and special version of the Terry and The Pirates classic "Something To Lose" was recorded as a demo with just Terry and John in 1980. The full on, balls to the wall studio version can be found on the album "Wind Dancer" and there is a "killer" live version on the CD release of "Too Close For Comfort". Terry's love for the history of the American Indians and the days of the olde west influenced this psychedelic western styled instrumental called "Comanche Boots". This is Terry's musical landscape interpretation of a Charles Russell or Frederick Remington painting.

The Pirates recorded two versions of "All In Your Mind" - one with lyrics which is included here and the other being an instrumental. Greg really did outdo himself writing this one, Terry sings the vocals. The album closes with a special treat, a never before released live version of "Jungle Love". Long before this became a major hit for Steve Miller it was a staple of T&TP shows...then Lonnie Turner plays their demo for Steve and he flipped over Greg's guitar work! Steve Miller not only records the song, but hires Greg Douglass as well, in part because he couldn't figure out how to play it, but mostly because of Greg's guitar playing ability. It was a lot of fun sifting through Terry's cache of music to create this compilation, I'd been after him for years to cut loose with some of these recordings and he was always holding out for the right time, well my friends that time has finally arrived.
by Mike Somavilla, 2008 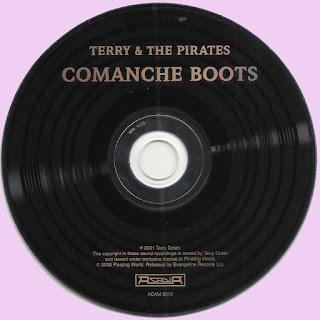