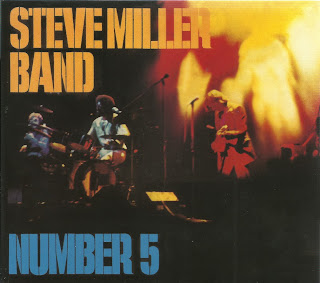 The fifth album in Edsel’s program is 1970′s aptly-titled Number 5 which brought the first era of The Steve Miller Band to a close.  Before heading to Nashville to record the album, Miller parted ways with both Glyn Johns and Lonnie Turner, leaving just Tim Davis from the original band line-up.

Bobby Winkelman of Frumious Bandersnatch was drafted for bass duties, and Nashville regular Charlie McCoy (owner of the studio where Number 5 was recorded) contributed harmonica to a few tracks.  Sidran, Hopkins and even Turner reappeared to make contributions, and Boz Scaggs appeared as a co-writer of an old bluesy onstage favorite, “Going to Mexico.”  McCoy’s harp added a different, though still blues-based, sound to Miller’s repertoire, and the change in scenery must have paid off when Number 5 became the group’s most successful album yet.  Miller’s distinct voice enlivened the jaunty “Going to the Country” (“Hey ho!  One thing I know!  People in the country really let themselves go!”), co-written with Sidran.

Buddy Spicher’s fiddle and some fine harmonies also made an impression.  Bud Billings added mariachi brass to the light-hearted “Hot Chili.”  Serious, topical issues were still on Miller and co.’s minds, however.    Tim Davis professed his belief in the banjo-accompanied “Tokin’s” that “in a while, I know it’s gonna change,” and Miller echoed John Lennon in the foreboding, musically experimental “Jackson-Kent Blues,” imploring listeners to “give peace a chance.”  Miller also took the opportunity to decry the “Industrial Military Complex Hex” and speculated on those young soldiers, asking them, “When the wind blows you home/To the shores of home/Will you be one of those/Who killed another man?”

In 1971, Steve Miller suffered a car accident, and Capitol released Rock Love, an album of vault material.  It was followed by the other “lost” album of Miller’s career, 1972’s Recall the Beginning…A Journey to Eden.  The same year, an Anthology capped off this period of the artist’s career.  In 1973, the Steve Miller Band released The Joker, and solidified its place in classic rock history.

Whereas many of Edsel’s other recent reissue series have included copious amounts of bonus material, the Steve Miller Band series instead concentrates primarily on the original albums with just one bonus track on one album.  The addition of lyrics and liner notes, however, make these presentations the best yet for these often-overlooked and once hard-to-find albums.   Before Steve Miller flew like an eagle, he was grounded in the blues and San Francisco psychedelia.  Fans will likely relish hearing how that great career started.
by Joe Marchese 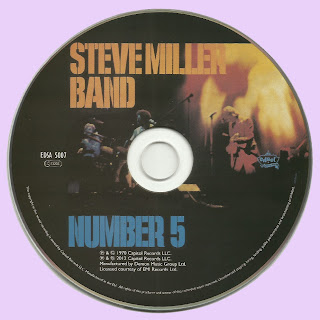