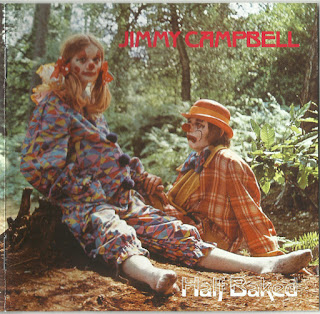 1970's Half Baked (released on Philips' subsidiary Vertigo), is an upbeat and somewhat raucous album. It has more of a 'band' feel than "Son of Anastasia" which is the benefit of using musicians that Jimmy knew - Merseybeats members Tony Crane, Billy Kinsley and drummer Pete Clarke. Another Merseybeats drummer, Phil Chittick, appeared on some of the tracks too and there were lush orchestral arrangements by Nick Ryan and Donald Fraser.

The countrified opener 'Green Eyed American Actress' highlighted words that Campbell would have been justified to repeat in years to come after commercial success had eluded him. The lyrics "I could have made it easily, why I didn't - well I really don't know" were, in hindsight, quite poignant. In reality, Campbell's reluctance to spend more time away from home ultimately prevented him making a real breakthrough - Billy Kinsley states in the sleevenotes that "I think Jimmy would have preferred just being a songwriter and not having to be bothered by a solo career".

Elsewhere on "Half Baked, the sonically superb tour-de-force 'So Lonely Without You' is comfortably on a par with anything recorded by the Plastic Ono Band - it boasts a Phil Spector-esque production and one of Jimmy's strongest ever vocals. It's testament to the strength and diversity of the album that it can veer from a track like this, and the epic piano-led rocker 'That's Right, That's Me', to the plaintive and reflective nature of songs such as 'In My Room', 'I Will Not Mind' and 'Closing Down The Shop'.

Other highlights are the brooding title track, which explodes into a driving monster of a chorus that features Badfinger's Joey Molland on guitar, and the melodramatic and impressively orchestrated single 'Don't Leave Me Now'.

There's a bonus track in the form of the stomping 'Lonely Norman' that uses a similar groove to Nilsson's 'Jump Into The Fire' and features some wild guitar playing by Eddie Grant from The Equals. This song originally appeared on the Vertigo sampler "Heads Together, First Round". Compared to Repertoire's "Half Baked" CD reissue of a few years ago, Esoteric's version sounds vastly superior and is probably the best entry point to Campbell's work for a newcomer.
by Jim Henderson 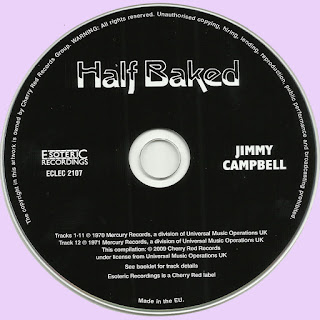