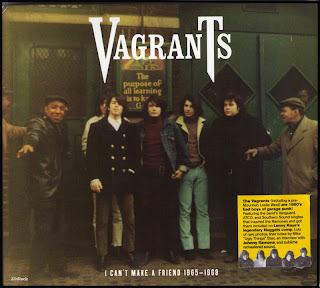 In 1965 Johnny and Tommy were playing together in a short-lived band called the Tangerine Puppets. "I try not to talk about it 'cause it was bad!" Johnny told me when I interviewed him in 1995. He was much more interested in talking about the Vagrants. "First I knew Roger Mansour, who was the drummer, and me and him used to be friends. He used to call for me in the morning and we used to go to school together. He was a great drummer, and I'd hear from him how he was going to get into the Vagrants.

Larry West-whose real name was Larry Weinstein, who was Leslie's brother-he was the bass player. He'd be sitting there in the study hall 'cause he'd be on permanent suspension for having his hair too long. He'd be saying he was starting a band with his brother and how his brother's a great guitar player. And I'd ask other kids in the school about if they knew the good guitar player, and they'd go, 'No, he's just a fat kid. He's no good.' But Larry would always be saying how great his brother was.

His brother was older, and he was just a dropout. Larry at this point was about 15,1 was about 16, and Leslie was about 18. Larry just sat there suspended the whole year 'cause all that mattered was the Vagrants and growing his hair-that was the important thing in his life.

So they were starting, and as soon as I saw Leslie play I said, 'Wow, this guy's great!' He didn't play like he played later on, but he was able to play whatever cover he was doing and do it exact, from Beatles stuff to 'You Really Got Me.' Whatever he would figure out, he would play just like the record." "We were close with the Ramones," remembers Larry, "but I didn't even know what they were doing. I didn't even know they were starting a band." At that point, they weren't. After the Tangerine Puppets broke up it would be another nine years before Johnny picked up a guitar and formed the Ramones. "I would try and get into wherever I could [to see the Vagrants]," Johnny told me. "Sometimes you could get into certain clubs who wouldn't get so heavy with the [ID] proofing. There'd be a place in the city.

I saw them at the Manhattan Center, Action House on Long Island, places like that. I must've seen them dozens of times "They went through so many different evolutions throughout the band ... Somewhere along the way they went away to Long Island to play some places, and that's when they came back and we started hearing more about the Rascals and Vanilla Fudge. The Vagrants came back and they were different. They were into more like the Rascals-type thing with the songs slowed down and doing sort of a soul type of thing, like 'Mustang Sally' type stuff. They were doing 'Good Lovin" stuff too.

They kept doing covers of other people's songs, but they would be better than the Rascals and better than the Vanilla Fudge at doing the stuff. They just looked better, and Leslie's guitar playing was far superior to Gene Cornish of the Rascals or Vince Martell, the guitar player in the Vanilla Fudge." The band's image and presentation made a big impression on Johnny. "The band looked so good," he continued, "and Larry was becoming like a Jim Morrison ... just like permanently fucked-up with the leather pants and the long, wavy hair ... Leslie would become more and more flashy with the outfits he would be getting into.

They'd just go through so many phases where everything would come in with the really loud colored clothes with these boas-these feathered things around him, y'know? Weird seeing some 350-pound guy looking like this!" "I only knew them then from the cafeteria in school," admits Peter Sabatino. "I saw them sitting there, y'know. They were new on the scene. I guess, because of the ego, I didn't pay a lot of attention to that, how upcoming they were.

It's only through your interview that I realized they were emulating us and we were idols to them. Like Larry and I used to wear these motorcycle jackets back then, and I guess they picked up on that. Whatever they thought was cool with the Vagrants; they took for themselves."
by Mike Stax 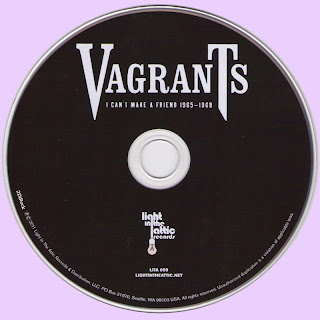