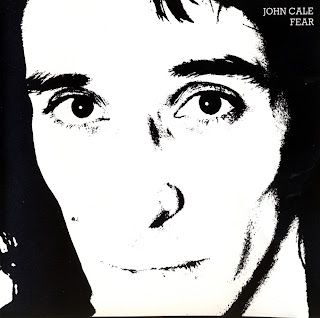 When ex-Velvet Underground virtuoso John Cale relocated back to Britain after a sojourn on the west coast of America, he was ready for a change in direction. Through his writer friend, Richard Williams, he took a three-year, six-album deal with Island Records. “There was a kind of dreamlike quality to London in those days”.

Cale wrote in his autobiography, What's Welsh For Zen? “I was glad to be back there with a different ambience and a new record deal to fulfill.” Moving into a house in Chelsea and then to Shepherd's Bush, Cale found himself somewhat isolated, spending his time recording and writing after spending mornings listening to music. “I would load the turntable with boxed sets of the Beach Boys and Mahler and sit there drifting in a West Coast nostalgia.” These influences spill on to Fear which featured support from Brian Eno and Phil Manzanera and marked a return to the brooding territory of the Velvets albums. It was a dense, clipped, rock album that pointed the way towards punk perfectly. It reflected Cale's dope and alcohol altered mindset. “[I] was trying to be Lou. I was on keyboards, guitar and bass . . . the title song disintegrates into a frenzied 'say, fear is a man's best friend', less sung than shouted.”

This track, “Fear Is A Man Best Friend”, and the eight minute “Gun” were towering achievements. Fear was well received by the UK press, and rightly so, as it brought Cale back to being a British artist. Nick Kent said in the NME that “there's more than enough lyricism and inventiveness dumped into the work to pale most other contemporary products into relative insignificance.” Although it is somewhat overlooked today, Fear demands repeated listening.
by Daryl Easlea 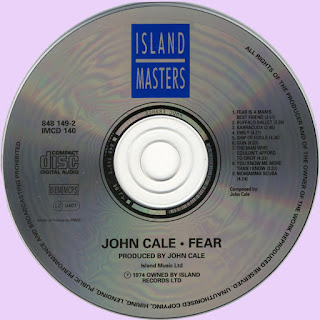 Free Text
Text Host
Posted by Marios at 11:42 AM 4 comments: