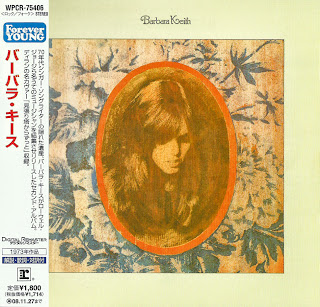 A singer/guitarist and folk-influenced songwriter, Barbara Keith's curious career began when she was discovered at Greenwich Village's famous Café Wha?. Her first appearance on record was in 1968, with her background vocals and one of her songs appearing on the self-titled debut from Kangaroo.

Verve Records released the first of two self-titled albums in 1969. Some critics fell in love with the album but as far as sales the album went nowhere. Her second self-titled album -- released by Reprise in 1972 -- coupled Keith with producer Doug Tibbles. Keith and Tibbles married and soon became unhappy with the music industry. Deciding to focus on family and develop their art with a major-label influence, Keith and Tibbles gave back their Reprise advance, a move that caused the label to under-promote her album.

Once again, the album didn't achieve much as far as sales, but Keith's songwriting skills were being noticed throughout the record industry. Barbra Streisand, Lowell George, Tanya Tucker, Delaney & Bonnie, the Dillards, and many others covered songs from the album, "The Bramble and the Rose" and "Detroit or Buffalo" being the favorites.

Keith reappeared in the '90s with her "AC/DC meets Patsy Cline" band the Stone Coyotes with her husband, and son John Tibbles, rounding out the band. The band found a cult following of which writer Elmore Leonard was a member. Leonard included the band in his sequel to Get Shorty, Be Cool, and included five Keith songs in the text.
by David Jeffries

Barbara Keith dropped out of the music scene before anyone really had a chance to appreciate her work. Originally recorded for Warner Bros. in 1971, Barbara Keith was withdrawn when Keith, not completely happy with the results, gave the advance money back and walked away from the music business.

With the re-release of the album 30 years later by Water, all of this will seem a bit odd, because Barbara Keith is a fine effort highlighted by great writing and solid production. Only one cover, Dylan's "All Along the Watchtower," is included, which is surprising in that the original material -- by a fairly unknown artist -- is both strong and familiar. Delaney & Bonnie covered "Free the People" (so did Barbra Streisand), and singer/songwriter Mary McCaslin sang "The Bramble and the Rose." Keith's own versions, highlighted by country-rock and classic rock treatments, respectively, are equally fine.

Keith's an expressive, soulful singer who sounds like she would've fit into Delaney & Bonnie's band, or passed for an American version of Sandy Denny. Other standout songs include the country-folk of "Detroit or Buffalo" and the rocking closer, "A Stone's Throw Away." The album is fairly short -- 35 minutes -- but it's not weighted down by filler or subpar cuts. Barbara Keith is an excellent album, and one hopes that its author is more inclined to appreciate it in 2004.
by Ronnie D. Lankford Jr. 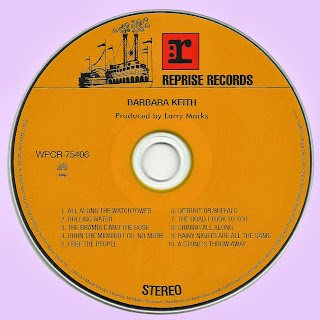 Free Text
the Free Text
Posted by Marios at 9:32 AM 10 comments: