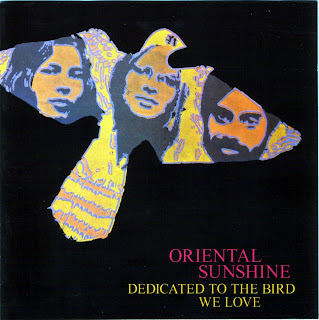 Album it being described as a "sitar kissed cruise through the gentler side of 60s psychedelia", and I couldn't have said it better myself! This is probably one of the most mellow relaxing albums very delicate and beautiful and is a most rewarding listen. Oriental sunshine are a Norwegian psych-folk group, although the songs are in English (except for a few lyrics presumably in some indian dialect).

The vocals do have a very charming Norwegian lilt though which if anything adds to the sound. The vocals are shared by Nina Johansen and Rune Walle, and their boy-girl harmonies sound. Here's a group of folk hippies from Norway who seem to have taken a trip to India in their minds, and returned with a sitar, tabla, and an Indian flute found in the local pawn shop.

The album opens with across your life, which sort of sets the scene for the album. It's quite a dark sounding song actually, which can be attributed to the organ and the vocals. The sitar features prominently on this track, as it weaves about in the background, and even gets a solo. They sound a little like a jazz band towards the end as the song picks up pace. It's a good opener, but a little darker than the rest of the album. The lyrics are quite A Whiter Shade of Paleesque actually "you turn your face again, its very strange and pale/the room begins to sway and becomes the mighty ocean", but good nevertheless.

The very gentle mother nature comes next. The instrumentation is very soft, mainly driven by the sitar with some acoustic guitar and flute in the background. The harmonies sound really great on this track, as does the flute. The lyrics are your typical psychedelic fairytale sort of affair "I went to the forest in a far away land, talked to the trees, talked to the trees/Criend tears of joy as I whistled to the bees, whistled to the bees". It's a very nice song, one of the highlights of the album.

Look at me is quite similar to Mother Nature, it also features the sitar/flute/guitar/tabla combination and the pretty harmonies. It's more uptempo and sunny though. unless comes next and it begins with a lovely cascade of notes on the sitar. It's actually more of a piano driven track though, but theres still plenty of sitar going on. It's a really pretty track, the melody is very charming. The song can be quite hypnotic actually, especially on the chorus as the sitar drones away. It sounds great, really takes you away to some other land. I feel like i'm on a flyinc carpet when I listen to this album!

Land of wisdom is very very eastern sounding. It's really magical, and very spiritual wich lyrics about Rishi and Krishni, and it opens with what sounds like a prayer in an Indian dialect or something before the song kicks in with the line "sing my prayers to the evening sun". I like this track a lot.

The album continues with let it be my birth, which is very upbeat and cheerful, and is surprisingly sitar-less! The indian vibe is kept up with the tablas and flute however. The lyrics are very poetic; "Bird song enchanting the green hills/lillies caressing the water", this song should put a smile on your face! can anybody tell is an interesting song, it starts off with some very slow singing with dark lyrics accompanied only by sitar, but then the organ makes a return and the song becomes.... slightly less dark and slow. Towards the end the tempo changes once again, and things go a bit jazz once again. It's not really a standout song on the album or anything though, it sounds too much like what has been heard already.

There is some really nice upright bass playing to be found though. visions is a really good track. They use the sitar differently here, instead of random noodling it plays a repetative riff which totally hypnotises you! my way to be hurt is the second sitar-less song here, its another great one. The guitar playing which is usually buried under flute and sitar is allowed to come out, and its actually very good where you went wins the award for most eastern sounding song on an already exceedingly eastern album. Its all in whatever language the bands genuine Indian member speaks. Even the organ sounds Indian!

The album ends in wondeful form with the short but extremely sweet i'm going. Its just piano, guitar and a wonderful Norwegian lady singing to you. Very beautiful but at 57 seconds long it leaves you wanting more!
by Adamus67 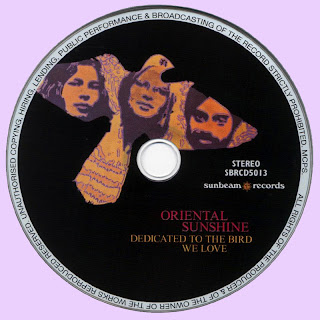