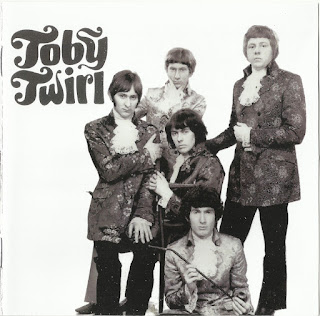 Newcastle band Toby Twirl was formed in 1968 and released three singles on the Decca label (these things used to matter, believe me), none of which troubled the charts at the time and none of which appear on this, effectively the band's debut album, although a version of their final 45, ‘Movin’ In’, is included.

The dozen recordings featured here were found by the band’s drummer, John Reed, in an old box of reel-to-reel tapes thought long-lost but which was found in his attic. So, as none of the band’s original singles sold enough copies to make the charts, they were dropped by Decca after just one year on the label and these lost recordings are mainly demos and rehearsal recordings the band made in the late Sixties, you’d be forgiven for thinking that maybe the tapes should have stayed hidden away. You’d also be wrong.

Remember that there was a considerable amount of singles being released every week back in the Sixties. Despite the few radio plays that Toby Twirl gained, if the songs didn’t find an audience almost immediately (or it was an established band), then a band’s latest 45 would fall by the wayside as there were another couple of hundred ready for the record buyers' attention coming along in the next seven days. Many 45's deserved a better fate than they received. While the band’s second Decca single, the group-penned ‘Toffee Apple Sunday’, is probably their best known song (and the only single that the band actually played on, in keeping with the times sessions musicians were employed with the band adding their vocals) and which was covered by one of New Zealand’s most respected bands of that period, the Fourmyula, the dozen songs on this delayed debut show that song wasn’t their only jewel and that the band must have been frustrated at not being allowed to play on their other singles as throughout these songs they prove to be a tight and talented unit.

There are a couple of Beatles covers, an interesting version of ‘Baby You’re A Rich Man’ which doesn’t stray too far from the original but which certainly has some of the band’s own identity stamped through it, more so than many of the perfunctory covers of Beatles songs back in those times. There’s also a beautiful version of ‘Something’; it’s not as laid-back as the original and features fantastic vocal work from the band; consider that this cut certainly wasn’t afforded the time and resources that the Fab Four put into their version and it’s an amazing performance.

Of the other covers, ‘Born To Be Wild’ shows that the band could handle heavier material with ease and that there was more to the group than their trio of singles would suggest. Again, without wishing to take anything away from the excellent playing from the band, especially on this track, it’s the impressive vocals that steal the show. Joe Cocker’s second single ‘Marjorine’ is another cover that the band put their own stamp on. Dare one suggest that while the vocals are light years away from Cocker’s own on this song they are more immediately pleasing? The band also make a fine fist of the Guess Who’s ‘American Woman’, again displaying the heavier direction they were maybe going to take had they been around just a little longer. What doesn’t work so well is the band’s take on the Everly Brothers' ‘When Will I Be Loved’, their reggae-infused arrangement takes away the edge of the song but strangely the main reason for this, the keyboard, is also its saving grace.

For those old enough to remember Toby Twirl this compilation of unreleased tracks goes some way to dispelling those images we had of the band as a pop-sike, pysch-lite act. The opening song, ‘Baby. What Good is Love?’ is a fine beat-era cut and more representative of what the band is remembered for, ‘The Dark Time of the Year’ is a reflective ballad typical of the period (‘Reflections of Charles Brown’ comes to mind) and once again those vocals shine, while ‘Something in Your Eyes’ adds a R’n’B flavour to the mix.

Considering the source of this material the good guys at Mega Dodo have obviously spent some time restoring the tapes to achieve the best possible sound and it’s been time well spent. The songs are all presented in punchy mono and are surprisingly clear. Congratulations to all who had a hand in restoring these tapes.

Toby Twirl’s original singles have gained more interest over the last few years than they did when originally released and the prices that the 45s now command reflect this, but for a full picture of just what this talented and vastly underrated group were really about save yourself a few quid and head for www.mega-dodo.co.uk where this collection is available on CD and also limited edition vinyl. One ‘lost’ sixties classic which really does deserve that title.
by Malcolm Carter, 02/10/2017 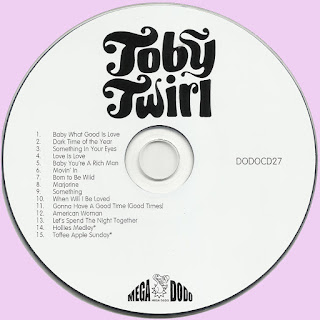