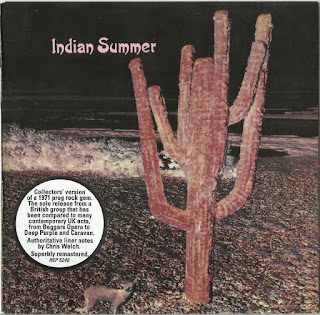 Indian Summer were formed in the summer of 1969 by keyboardist Bob Jackson, guitarist/vocalist Colin Williams, drummer Paul Hooper and bassist Malcolm Harker. Based in Coventry they toured the local universities and colleges in their native Midlands before being spotted by manager Jim Simpson who also looked after Black Sabbath and Bakerloo amongst others.

In fact, they often filled in for Sabbath when they were too poor to be able to afford to get to the gigs they were booked to play! Ex-Vertigo Records manager Olav Wyper had been employed by RCA to head its progressive Neon Records label and, after a recommendation from Simpson, he signed the band after witnessing them go down a storm at Henry's Blues House in Birmingham. Teaming them with producer Rodger Bain, who'd produced Black Sabbath's self titled debut album, he put them into London's legendary Trident Studios to record their debut album.Indian Summerwas released in early 1971 (NE3) though a proposed single "Walking On Water" failed to see the light of day.

Immediately after the album's release, Harker left to take over his father's engineering firm (he currently lives in America). His replacement was Wez Price, ex-The Sorrows, who undertook the promotional duties required of the band, including dates in Switzerland. However, on returning from a gig in early 1972 with no money (and a bag of chips between them!) the band felt that something was wrong and decided to call it a day.

Colin Williams retired totally from the music industry to take up employment in the motor industry. Paul Hooper played in various Midlands based bands before teaming up with Bob Jackson in The Dodgers for 1978's Love On The Rebound album, and is currently a member of The Fortunes.

After extracting himself from his contract with Jim Simpson, Bob Jackson teamed up with ex-John Entwhistle vocalist Alan Ross for two LPs and numerous tours. He then joined Moon on their Too Close For Comfort LP of 1976 before passing an audition for Badfinger who he stayed with for nearly three years. He then formed the Dodgers with Paul Hooper before joining ex-Uriah Heep vocalist David Byron for theOn The RocksLP. Since then he's played with the likes of The Motors, The Searchers, Jeff Beck, Jack Bruce and Pete Brown and still plays in local bands as well as teaching music.
by Mark Brennan - Special thanks to Bob Jackson 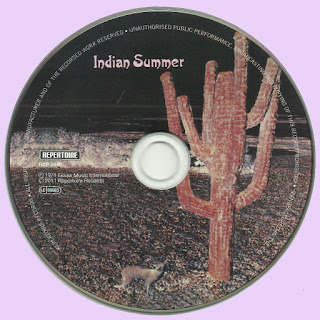