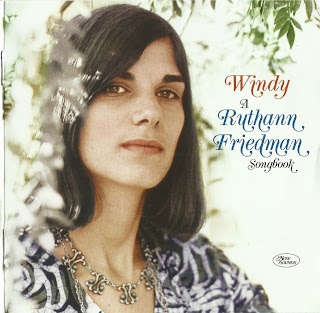 A look at the intense visage of Ruthann Friedman on the cover "Windy: A Ruthann Friedman Songbook" reveals those “stormy eyes that flash at the sound of lies,” but a listen to the sounds within shows the artist spreading her “wings to fly above the clouds.”  For here is an entire disc’s worth of never-before-heard pop nuggets, crafted with a delicacy and beauty to match that photo.  Windy, of course, is so named, of course, for The Association’s 1967 No. 1 hit penned by Friedman, which was recognized as one of BMI’s Top 100 Songs of the 20th Century.  Its eighteen tracks were recorded between 1966 and 1973, truly a period during which anything was possible.  They find Friedman supported by such luminaries as Van Dyke Parks, Randy Newman, Curt Boettcher, Ron Elliott and members of the Los Angeles Wrecking Crew, and reveal a gifted songwriter who was very much more than a “one-hit wonder.”

Chances are, if you know the music of Ruthann Friedman beyond “Windy,” it’s due to her 1969 Reprise album Constant Companion, a fragile psych-folk gem that many have compared to the best of Vashti Bunyan or Judee Sill.  Or perhaps you know Water Records’ 2006 volume of “lost” songs, Hurried Life.  But Now Sounds’ new excavation unearths a wealth of inventive pop.  Though Friedman’s own, stripped-down recording of the seminal “Windy” is reprised (in alternate form) from A Hurried Life, it’s surrounded with seventeen other melodic gems ranging from the sunny to the sad.  These have been drawn from demos and publishing recordings, as well as songs intended for her first, unfinished A&M solo album.

Compilation producer/designer Steve Stanley’s vivid essay explains that a potpourri of influences affected young Ruthann, including the Broadway musicals of Irving Berlin, Frank Loesser and Richard Rodgers, the folk songs of Woody Guthrie and the rock-and-roll of Bill Haley and His Comets.  Indeed, the music on Songbook is stylistically varied.  Friedman possessed a husky, expressive and piercing voice that, at times, recalls Grace Slick; it’s no surprise, then, that she was briefly considered to front Jefferson Airplane following Signe Anderson’s departure.  She modestly reminisces in the liner notes, “They didn’t take me, which was smart.  I mean, Grace Slick, how can you turn that down?”

Four beguiling tracks have been rescued from sessions helmed by Curt Boettcher and Steve Clark in summer/fall 1966.  Boettcher and Clark backed Friedman with many of the musicians also heard on their production of And Then…Along Comes the Association including bassist Jerry Scheff (best known for his work with Elvis Presley) and the Wrecking Crew guitarist Mike Deasy.  A slinky, James Bond-esque intro announces “Don’t Say No” in which Friedman poses the pained question, “Can’t you see how dark my life is without you?”  Boettcher believed in the song and later re-recorded it with The Oracle on the Verve label.
Friedman brings attitude to the spare “Please, Please, Please” (“You better start to change your ways if you want this love to last!”) and the garage-rock-with-horns of “Burning House.”  The spirited “There’s a Place in the Sky” beckons listeners to the locale where “there’s only love,” imploring “Come on, everybody, be yourself.”  This song wonderfully features the same poetic blend of the earthbound and the celestial that Friedman created in “Windy.”  It’s quite the mystery why The Association didn’t return to the Friedman well following the success of “Windy.”

Tommy LiPuma helmed sessions in 1967 and 1968 for Friedman’s unfinished A&M debut.  It’s crushing to read Friedman’s recollection of Jerry Moss informing her, “You’re the first person I signed to this label who didn’t make it” and summarily dropping her from the label.  Based on the songs premiering here, Moss clearly didn’t make the right decision!  These tracks hold their own alongside those recorded by LiPuma for his other top-notch A&M charges including Chris Montez and Roger Nichols and the Small Circle of Friends.  It didn’t hurt that Friedman’s engaging and melodic songs were being brought to life by the likes of Parks, Newman, Elliott, Russ Titelman, and Wrecking Crew stalwarts Hal Blaine, Lyle Ritz, Joe Osborn, Mike Deasy, Michael Botts and Jim Gordon.

For “High Coin” and “I Think It’s Going to Rain Today,” Friedman called on the songs’ composers to accompany her – respectively, Van Dyke Parks and Randy Newman.  Parks’ tack piano is unmistakable on Friedman’s shimmering rendition of “High Coin.”  The song had previously been recorded by artists including Bobby Vee and The West Coast Pop Art Experimental Band; it also earned a spot on Harpers Bizarre’s 1967 Anything Goes album, and Jackie DeShannon would release a version in 1968.  An individualist herself, Ruthann found the clarity and resonance in Parks’ dazzling wordplay, and was similarly sympathetic to Newman’s stark, and even more oft-covered, “I Think It’s Going to Rain Today.”

From these sessions, “Halfway There” is tightly-arranged folk rock with a confident, brazen lead vocal from Friedman.  “Raining Down on My House” is the most atypical track, Eastern-influenced and sitar-flecked.  The evocative “The Sky is Moving South,” co-written with Friedman’s onetime companion Peter Kaukonen, even has a jazz influence.  (An alternate version of this song can be heard on Hurried Life.)  Best of all is “When You’re Near.”  This ode to a lover boasts a pretty, gently loping melody accented by wistful brass fanfares, a lovely guitar spotlight, and tight, dynamic drums.  It’s a companion of a sort to “I’ll Make You Happy,” another gorgeous but rhythmic affirmation of love.  Both craft and genuine emotion pour forth from these songs, and it’s hard to believe they’ve remained on a shelf for over 45 years.

Despite the collapse of the A&M deal, Van Dyke Parks took Lyle Ritz, Bread’s Michael Botts and Peter Kaukonen into the studio for Ruthann’s “Cary” in early 1969.  It’s a pretty and reflective character portrait that compares favorably with Joni Mitchell’s work of the time.  1973’s “Living with My Best Friend” serves as coda to the main portion of the program, with a very different feel than the preceding tracks.  Its breezy verses yield to an almost funky chorus (“Don’t bother raising your eyebrows/Unless you’ve got some new kind of guarantee!”), and nice work on guitars, percussion and horns surround Friedman’s impish lead vocal.
Two bonus demos not sung by Friedman conclude the CD.  The piano boogie “Pinball Man” is sung by an unknown female vocalist and “Candy Apple Cotton Candy” is sung by Art Podell and Nick Woods, of the New Christy Minstrels.  The latter was recorded on Warner Bros. by Pat Shannon, with a Dick Glasser arrangement.  It’s a far less introspective composition than the others on this disc, but it’s sweetly charming, nonetheless.

Friedman’s comments on the music she made over 40 years ago are eye-opening.  Though she felt that “I’m writing this pop stuff and, I don’t know, it sounds forced…,” the delicious music of Windy: A Ruthann Friedman Songbook is anything but forced.  The disc is also a feast for the eyes, thanks to Steve Stanley’s spot-on graphic design which replicates the feel of an actual LP from that era (right down to the A&M-evoking art on the CD itself).
by Joe Marchese 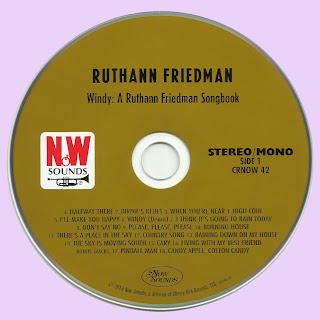 Free Text
Just Paste
Posted by Marios at 4:40 AM 11 comments: