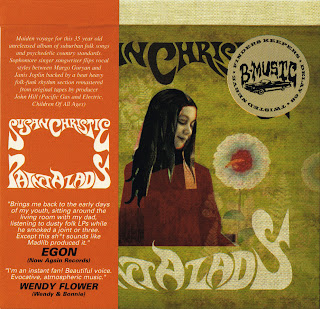 The late ‘60s, early ‘70s were such a creative period, it is sad to realize how many albums got shelved and passed unnoticed and given no chance. This album had a press of only three copies.

When Keith Darcy from Finderskeepers, had discovered the progfunky group Wool, he also checked out other things on which John Hill participated, he was amazed to find out how one movie track from ‘Riders of the Mark’ (1967) sounded like an exact sonic blueprint for Black Sabbath’s “Iron Man”, or how beautifully he arranged this private album from Susan Christie.

When I first heard this album, I was firstly reminded of the delicate arrangements of some of The Mamas and The Papas, as imagined as some solo release from a similar group. Not only the arrangements are tight and effective, well thought over and well produced with band arrangements and orchestral touches, but the songs are well chosen and attractive, Susan Christie has also great vocal qualities, a strong combination that deserves to be heard, and that makes repeated listens a real pleasure. “Rainy Day” has some beautiful dark melancholy in the voice and lyrics, while through the music this is uplifted to the acceptable human sweetness of what makes such feeling an ‘experience’ (so not bringing things down, but lifting it into musical pleasantness).

Everywhere the arrangements are perfect, with the right emotionality made stronger by drums or rock added to the more lush orchestrations, (mixed with acoustic guitars,..)… Just now and then associations with a theatrical/filmic emotionality are made possible, as if highlighting a Morricone accompanied movie…and there’s also one real western song, “Ghost Riders in the Sky”, again into the folk-poprock context.

In the middle there’s also one longer track of over 9 minutes called “Yesterday, where’s my mind?”, with a more experimental introduction, in an ESP-LP LSD fashion, with trance spoken word, at first just rhythmically accompanied, with a bit of organ, before the narrator/singer and the organ goes a little bit crazy, as a free-er introduction that still leads to another real song.
Psych-Folk 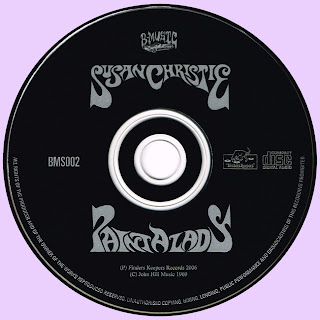