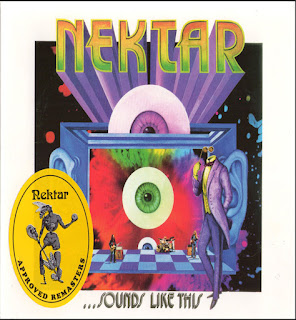 For Nektar, 1973's double set "Sounds Like This" was a pivotal moment. Roye Albrighton, (guitar, lead vocals), Allan "Taff" Freeman (keyboards, vocals), Derek "Mo" Moore (bass guitar, vocals) and Ron Howden (drums and percussion), had been touring and recording solidly for nearly four years, ably assisted by Mick Brockett's elaborate light show. Forming in Hamburg in 1969, Nektar quickly established themselves as a major live attraction in Germany. Signing to Bacillus records in 1970, the band had recorded the superb albums "Journey to the Centre of the Eye" and "A Tab in The Ocean" and were now looking to spread their music outside of Germany.
The first overseas territory to be receptive to Nektar's music was Britain. Andrew Lauder, head of the UK division of United Artists records had become aware of the band thanks to the members of Welsh band Man recommending the group highly. As a result, the next album to be recorded by Nektar would also secure a British release. "Sounds Like This" was conceived as a way of capturing the live power of Nektar in the controlled surroundings of a recording studio, without employing the use of overdubs and as a vehicle to record of die older material written by the band in their formative months. The first sessions for “Sound Like This" took place at Dierks studio in Stommeln on 12th October 1972. In front of a small invited audience Nektar performed a lengthy set of music which included versions of "Good Day". "A New Day Dawning" (written by the band in 1969), "Wings", an extended jam of "Cast Your Fare" which featured a riff utilised in "Mr. H", later included in "A Day in the Life of a Preuhtr" and"Da Da Dum". In addition several pieces were recorded that in hindsight proved to be the birth of several major compositions in the later Nektar canon. "Sunshine Down on the City" was a twelve minute long opus that included sections of music that later appeared in "Remember the Future Part Two" and "A Day in the Life of a Preacher", whilst "It's All in Your Mind" was a twelve minute tour de force that also contained passages that would later feature in the bands magnum opus "Remember the Future".
Despite the excellence of these recordings, no final mixes were made, as both producer Peter Hauke and Nektar felt the performances, (with the notable exception of "Wings"), whilst passionate and energetic, could be improved upon. Therefore the decision was made to enter the studio on February 8th 1973 to record a further "live in the studio" session. By this time "A Day in the Life of a Preacher" had evolved into a full thirteen minute long concert highlight and was captured for the first time on multi-track tape. Additionally, newer and more polished versions of "Good Day", "New Day Dawning", "WhatYa Gonna Do?" and "Cast Your Fate" were recorded. Nektar also took the opportunity to revisit both sides of their 1972 single "Do You Believe in Magic?" and "1-2-3-4" along with the Ron Howden showcase "Odyssey".
This time the fruits of the recording sessions were deemed productive and the sessions were duly mixed and released in June 1973 under the title "Sounds Like This" in Germany and the UK. The interest generated by the first British Nektar release resulted in the first UK concert dates by the band and laid the foundations of the recording of the next Nektar album, "Remember the Future" at Chipping Norton studios in Oxfordshire. This work was to be their breakthrough album in the USA, reaching number 19 on the Billboard chart and was declared "album of the year" in Germany by the magazine Musik Express. Nektar's star was truly on the ascendant.
by Mark Powell 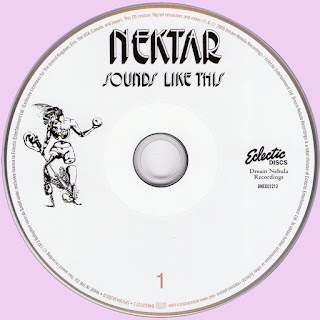 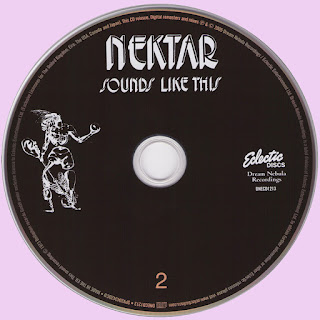