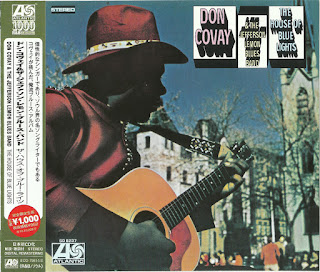 Released in 1969, The House of Blue Lights was Don Covay’s bold, adventurous attempt to reach the underground audience.  Here Covay is backed by the white-hot Jefferson Lemon Blues Band, credited on the album jacket.  Prior to this LP Don Covay released two of the finest soul/pop albums of the 60’s, Mercy! and See-Saw.

The House of Blue Lights is much different than what came before.  Most of the record is grounded in electrified country-blues; a deep Southern, swampy aura dominates the proceedings.  No soul man of the time tried any blues like this before: raw, anguished and lived-in with lots of twangy guitar solos for good measure.   A few of the numbers, namely the title cut parts 1 & 2, maintain a moody organ-led soul sound that’s highlighted by light sitar flourishes.  These lengthy tracks are clear standouts but other cuts still have the power to stun and amaze.   In the beginning “Mad Dog Blues” hit me like a ton of bricks.  This tune begins with Covay (and band) barking like dogs in heat.  It also features a fantastic flute solo and stinging lead guitar work; play this one LOUD for best results.  “Four Women” is more of the same, Covay’s smooth, soulful vocals complimented by crunching electric guitars and a rocking beat.  Most of the album’s tracks are originals but a few covers are worth mentioning.  Consider the old country-blues standard “Key To The Highway,” Covay manages to breathe new life into this classic warhorse by adding muffled vocals and electric back-porch-blues guitar.

Although blues sounds dominate this set list, The House of Blue Lights is a varied listening experience that’s well paced.  Some tracks are accoustic country-blues (“Steady Roller”)  while others like “Shut Your Mouth” feature greasy blues harp, piano, pounding drum fills and complex song arrangements.   When listening to the great down-and-out “But I Forgive You” I can’t help but think of a young, bluesy Rolling Stones.  Bruce Eder summed it up best in his review of The House of Blue Lights on allmusic.com; “This album is not only a great record on its own terms, but it’s sort of a black parallel/precursor to a few blues-rock LPs by white artists that sold a hell of a lot more copies around the same time. Much of the album sounds like the sonic and spiritual blueprint for Let It Bleed and Exile on Main Street and parts of Layla & Other Assorted Love Songs.”

If a bit offbeat, The House of Blue Lights is one of Covay’s best albums.  I’ve seen other reviews refer to the LP as “odd” but I think it’s a wonderful, individual recording that’s seldom been equalled in the world of soul music.   The overall vibe of The House of Blue Lights is that of a great artist and tight band, blasting thru a powerful set of swampy blues rock on one of those hot, humid southern nights.   A true American classic.
by Jason Nardelli 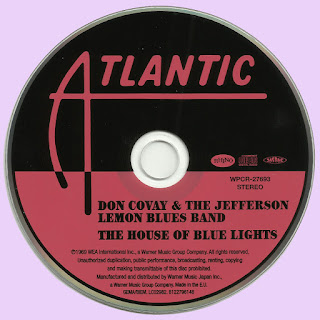 Free Text
the Free Text
Posted by Marios at 4:39 AM 9 comments: