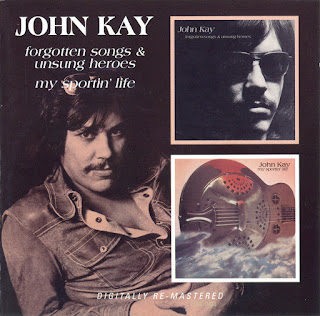 Now that John Kay has shed the burden of Steppenwolf, I suppose that it’s safe to assume that Forgotten Songs and Unsung Heroes is an accurate portrait of his present musical state.

On his first solo album, Kay does not actually commit himself to any particular style. Instead, he picks and chooses material with great variety.

Armed only with a test pressing dated February 22, 1972, and a barren sheet on which is typewritten the names of the songs and their personnel, the first impression one gains is one of simplicity. The numbers are extremely simple, and vocal work definite, with the instrumentation adding to the impact of the lyrics.

Ahhhh, the lyrics… they seem to infer a choice on Kay’s part of express himself in a more personal light that any other he has done. I recall when they would say, no one lives for just one day/ Don’t save dreams that can’t be sold/Don’t chase rainbows, just their gold/ Tried it my way, tried it mine/ I won the race before my time/ But golden trophies, fancy toys, don’t compare to childhood joys.

I suppose some thought that with the dissolving of Steppenwolf, Kay would retire to a solo performer – performing material identical to that of Steppenwolf, but with a new situation that would be more economically fulfilling, shall we say. All I can reply to these materially-minded people is that not one of these tracks could have been successfully recorded by Steppenwolf. This music and Steppenwolf are two separate entities.

Kay obviously has definite roots in Country and Western music. In “I’m Movin’ On,” a Hank Snow tune from the 1950?s, the man sounds so at home and comfortable crooning, “So I’m movin’ on, I’m rollin’ on/ You’ve broken your vow and it’s all over now, so I’m movin’ on” that it’s a wonder he didn’t become famous as a lead singer in a C & W band, and use hard rock for his solo album, rather than vice versa.

The diversity in the album is extended still further in the Robert Johnson standard, “Walkin’ Blues,” a shuffle that comes off well as a showcase for Kay’s weather-worn vocal work and restrained, tasteful bottleneck work.

The late Richard Farine and Hank Williams are tapped for “Bold Marauder” and “You Win Again” respectively – the latter of which I must bashfully indicate as my own personal favorite.

This album is exactly as the title suggests, Forgotten Songs and Unsung Heroes. The forgotten songs being John Kay tunes that weren’t suitable as “Steppenwolf material.” The unsung heroes being: A brilliant young Indian songwriter by the name of Patrick Sly whose “Many a Mile” opens the album; Hank Williams, who to the younger set means nothing but a hazy singer who sang “hick music,” and of course Robert Johnson, the bluesman who started it all. These talents of yesterday seem to have been lost in the “pop” culture.

In this excellent low-keyed album, John Kay tries to give a little exposure to the ones who deserve it, and at the same time try and vent a side of himself unfamiliar to the record-buyer.

The material is not new territory for Kay. The tendency toward the styles unveiled in this LP have been evident in most of the early Steppenwolf albums, but the delivery is cleaner, more definite, but most important of all … confident.
by Cameron Crowe, (San Diego Door) March 30, 1972  – April 13, 1972 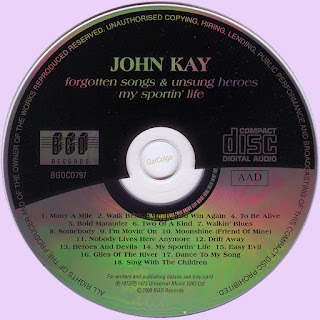 
Free Text
the Free Text
Posted by Marios at 6:54 AM 7 comments: