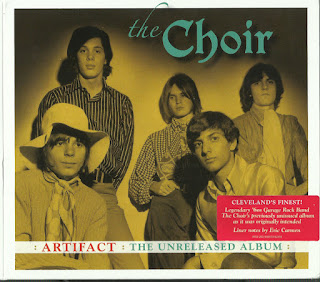 During the British Invasion years, a Cleveland, Ohio band called The Choir ploughed a Brit-focussed furrow from late 1964. Initially and tellingly, they were named The Mods. Their prime mover, Dann Klawon, was a subscriber the switched-on UK monthly Rave, had missed a Mods show to hitch-hike to a Rolling Stones concert and was the first Clevelander to own a copy of “Purple Haze”. His band became The Choir in 1966, played on Who and Yardbirds’ bills, and went through continuous line-up changes. Even so, they issued three singles over 1966 to 1968 beginning with the classic “It’s Cold Outside”. Their music had a moody, minor-key, Zombies-leaning slant.

In February 1969, with founder Dann Klawon gone but his brother Randy on board and with the ethos of the band intact, The Choir recorded an album’s worth of material in the hope of securing a contract with Mercury Records. The new CD Artifact: The Unreleased Album is the first-ever release of this album. Some of its tracks – “Anyway I Can”, “Boris Lament”, a cover of The Kinks’ “David Watts” and “If These Are Men” – have come out before in varying grades of fidelity but Artifact is sourced from recently unearthed masters found in the archive of the late Ken Hamman () - best known for his work with Pere Ubu, the owner of the Ohio studio Suma.

Artifact is a major release and helps fill out the narrative in a figurative chapter of the story of America’s popular music: one dedicated to late-Sixties bands drawing from the hard-edged side of British pop rather than a Band-inspired rootsiness, blues-influenced heaviness or other au courant templates. Similarly minded fellow travellers included Todd Rundgren’s The Nazz and California’s Powder. Artifact places The Choir as central to this narrative.

At this point, The Choir were on the their fifth. The presence of two keyboards acknowledges a Procol Harum influence but the recordings reveal the band as having, to varying degrees, ears open to The Bee Gees, The Kinks, Small Faces and The Who. They did not score a deal with Mercury and, after another couple of line-up changes and a further single, packed it in during June 1970. Bonfanti soon went on to The Raspberries, whose leader Eric Carmen was also from Cleveland and had been in other local bands while The Choir were active.

The Choir were important not just because they were a great band in their own right but also as they impacted on The Raspberries, one of America’s greatest Seventies bands. Eric Carmen has long acknowledged his enthusiasm for The Choir. Some of Artifact could pass for early Raspberries recordings.

Track one is “Anyway I Can”, which first surfaced in murky quality on a 1976 EP issued by the Bomp label and reappeared in slightly better fidelity on CD in 1994 . Though it is the same recording, the new version is a revelation. It is pin-sharp, sports edgy dynamics and is thrillingly immediate. Practically, whether intentionally or not, “Anyway I Can” is the core essence of The Left Banke’s “Walk Away Renee” made over by enthusiasts for the 1968 Small Faces. While possible to detect the ingredients, the track sounds like nothing else. In part, this is due a sturdiness and drumming so powerful it’s as if Bonfanti is trying to hammer his kit through the studio floor.

If that were not enough to make the case for the 1969 Choir as one of America’s great bands, the excitement continues with the driving mod-rocker “If These Are Men” () - more amazing drumming and the fantastic “Ladybug”, a rolling ballad suggesting Procol Harum’s “She Wandered Through the Garden Fence” but infused with power chords and even more of that assertive drumming. On the relatively subdued yet intense ballad “Have I no Love to Offer”, the band get close the emotive force of Robin Gibb in full flow. The powerful “It’s All Over” also brings The Bee Gees to mind.

This configuration of The Choir, though, was more than the sum of it what it drew from. The unique identity shining through seamlessly melds high-pitched, yearning vocals, minor-key melodies and a lacerating power-pop attack. Exactly what The Raspberries took into the American charts in 1972.

Unfortunately, although the booklet with Artifact includes a couple of short reminiscences and a note on the source tape it lacks a contextualising essay. Thankfully, the extraordinary music says it all. This is one of the Sixties’ great lost albums and its appearance is to be greeted with, as The Raspberries sang in 1973, ecstasy.
by Kieron Tyler, Sunday, 18 February 2018 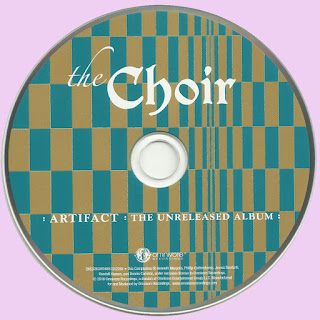