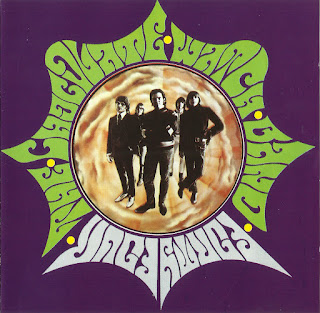 In the roll call of 1960s garage band heroes, the Chocolate Watchband reside at the very top. Their notoriety derives from the handful of singles and LPs that they made, balanced between the Watchband’s own intense Anglophilic blues wailing, and mysterioso studio trickery on the half of producer Ed Cobb. Their best-known cut is probably ‘Let’s Talk About Girls’, which appeared on the seminal 1972 garage band sampler “Nuggets,”, but the Chocolate Watchband have many more such gems within their vintage catalogue, all of which is available to you in fully remastered sound on Big Beat Records.

The original Chocolate Watchband was formed in the autumn of 1965 at Foothill College on the San Francisco peninsula, with a six-man line-up that featured guitarist Mark Loomis and drummer Gary Andrijasevich. Playing the R&B and folk rock of the day, the outfit did some recording, but outside of their unusual name, made little impression beyond local gigs in the San Jose area. The draft and the departure of key personnel rent the group asunder late in the year, but Loomis determined to reassemble the band with a new line-up, including rhythm guitarist Sean Tolby, bass player Bill Flores and on lead vocals, San Jose State student David Aguilar.

Though it had been Loomis’ group up until this point, Aguilar was the spark that moved the Watchband to the top of the class. Within weeks of this line-up getting together, they took San Jose by storm, blasting their way to the top of the local circuit with a scintillating, mesmerizing set of Americanized Stones, Yardbirds and Animals covers. Aguilar in particular was a master of dynamics, and the singer directed his mod-togged combo through sets that made the new Watchband the talk of the local circuit. In the summer of 1966 the group signed with manager Ron Roupe, whose connections included Ed Cobb of Green Grass Productions, then riding high in the chart with the Standells. In quick succession Cobb inked the Watchband and ushered them to Los Angeles to record.

Technically, the first release was ‘Blues Theme,’ a pseudonymous instrumental cover credited to The Hogs, but the Watchband’s debut proper was the Cobb-penned ‘Sweet Young Thing’, perfectly suited to the group’s arrogant punk stance. It was released in December 1966 on Tower Records’ R&B imprint Uptown, an unusual choice of label which meant that the group was subsequently perceived by some agents as a black act. The single’s flip was an atmospheric reading of Dylan’s perennial ‘It’s All Over Now, Baby Blue’.

The '44' album was recorded between 1966 and 1968 all of the tracks were actually recorded by the group as opposed to the many sides issued under their name, but cut by session players. Great sounds from beginning to end and featuring the great I'm Not Like Anybody Else By the Kinks and the two Frank Zappa produced sides from the mega rare Hanna Barbera 45.
Ace-Recs 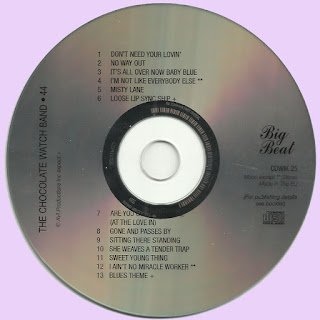 Free Text
Text Host
Posted by Marios at 5:00 AM 7 comments: