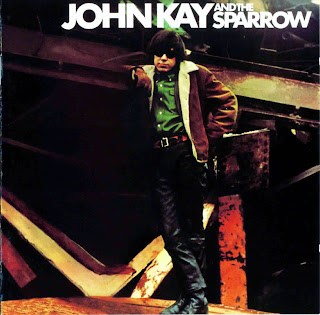 Steppenwolf leader/founder John Kay is perhaps the most overlooked early contributor to the musical style that would become heavy metal and hard rock. Kay was the first rocker to use the phrase heavy metal in a song, in one of metal's first great anthems: Steppenwolf's 1968 classic "Born to Be Wild." Born Joachim Fritz Krauledat on April 12, 1944, in the section of Germany that was once known as East Prussia, it was the American rock & roll that he heard on U.S. Armed Forces radio after his family moved to East Germany that fueled his interest in music.

After relocating to Toronto, Canada, in 1958, Kay became even more transfixed by rock & roll -- leading to Kay picking up the guitar, writing songs, and playing in local bands. In the '60s, Kay founded the Sparrow, a rock outfit who played both Canada and the U.S., but received little attention. The group had fallen apart by 1967, but with a new, harder-edged style of rock beginning to conquer the charts and airwaves (Cream, Jimi Hendrix, and the Yardbirds), Kay decided to pursue this direction with his next band, Steppenwolf (titled after Hermann Hesse's novel of the same name).

After moving to Los Angeles, the fledgling band was signed to Dunhill and recorded their self-titled debut, issued in 1968. The album became a sizeable hit, as "Born to Be Wild" was unleashed on an unsuspecting record-buying public, becoming one of rock's most instantly identifiable and enduring hits of all time. After the track was used in the 1969 cult classic movie Easy Rider, it subsequently appeared in countless other movies and TV commercials over the years and was covered by numerous other bands (Blue Oyster Cult, Slade, Crowded House, and the Cult).
by Greg Prato

Before Steppenwolf hit with "Born to Be Wild," there was a blues band out of Canada called the Sparrow. Not only is the future growl of John Kay subdued on this record, so are the bellowing sounds that became organist Goldy McJohn's trademark. The John Kay composition "King Pin" has an almost jazz piano playing against the harp. With drummer Jerry Edmonton, McJohn, and Kay, this is three-fifths Steppenwolf, and it comes off as Steppenwolf lite.

Guitarist Dennis Edmonton, the drummer's brother, composes or co-writes five of the songs, where John Kay wrote four. Dennis Edmonton's "Chasin' Shadows" is psychedelic pop, very British sounding, and gives indications of the trippy style he would develop. When he left the band he became Mars Bonfire and penned "Born to Be Wild,," released on his own CBS album Faster Than the Speed of Life. "Green Bottle Lover," written by both Edmonton brothers, is even more psychedelic and rocking.

The liner notes are terrible, giving little information about this historic disc, leaving it to the music. Where John Kay's "Twisted" starts off the festivities with the boogie-woogie blues that seems indicative of the Sparrow, the final track, "Isn't It Strange" by St. Nicholas and Dennis Edmonton, goes full throttle with the psychedelia. A very interesting collection of sounds exhibiting two musical sides, only hinting at what they would develop when they hooked up with producer Gabriel Mekler to eventually crank out about a half a dozen Top 40 hits on Dunhill.
by Joe Viglione 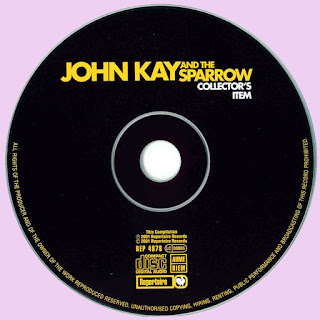 Free Text
the Free Text
Posted by Marios at 6:40 AM 8 comments: