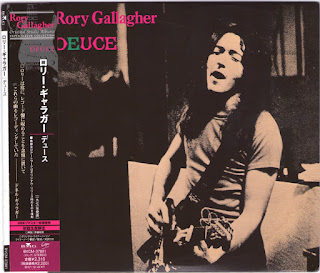 'Deuce' was the culmination of Rory's musical apprenticeship. He'd toured with an Irish showband, released acclaimed records with 'Taste' and played the Isle Of White Rock Festival, but this was the first time he'd had the necessary level of control, self belief and technical ability to record the album he'd always wanted to. His eponymously titled first album had seen Rory's transition from group member to solo artist, allowing him a degree of artistic freedom he'd so tar not encountered.

This resulted in an excellent debut album, highlighting Rory's musical development since 'Taste'. In 1971 when he began working on 'Deuce', he decided on a different approach to the recording of his second album. His first album, 'Rory Gallagher, had a precise, organised sound, Rory was keen 'Deuce' would capture the raw energy of a live performance. To achieve this, many of the sessions were recorded just before or immediately after gigs and production was kept to a minimum. The results were electric.

Rory came alive when he played in front of an audience, as he said, "I love playing to people. The audience means a lot to me. It's not the whole thing, I love recording too, hut I need regular and frequent contact with the public. 'It gives me energy". That was why capturing a 'live' feel on the album was so important to Rory.

'Deuce' was the first, but certainly not the last time, he achieved this. 'Deuce' was recorded at Tangerine Studios in Dalston, which was built by the innovative 60 s producer, Joe Meek. This North London studio was sited next to a bingo hall and any fans blessed with a keen sense of hearing may just be able to make out the distant shouts of the bingo caller.

'Deuce' saw Rory and his band reach a new musical high. Band members, Gerry McAvoy and Wilgar Campbell, played with a fresh, raw quality that complimented Rory's amazing Strat. work. They were young and talented, with a point to prove, the ingredients that have produced some of the greatest music in history. 'Deuce' would become part of that illustrious tradition.

This album has been re-mixed from the original multi-track master tapes by Colin Fairley, who worked with Rory on many of his recordings. When the recording of 'Deuce' was complete Rory was ecstatic with the results. The album had successfully captured the 'live' sound he'd wanted to replicate. After more than three decades 'Deuce' has lost none of it's youthful power and for me, and many other fans, it represents the beginning of a musical friendship that would last many years.
by Shu Tomioka, Charles Stanford 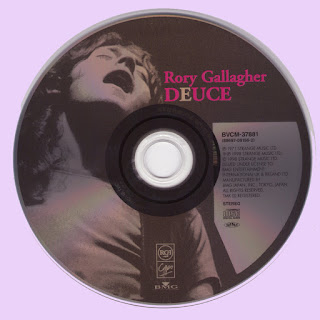