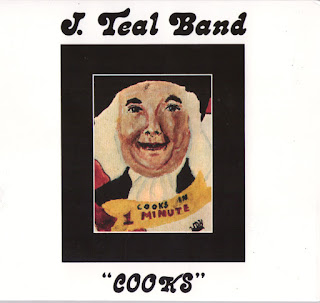 The J. Teal Band was formed in 1974, originally called the Jonathan Teal Band, named after a legendary gold prospector from the hills of North Carolina. They were all from Spartanburg, South Carolina. Yes. the same town the Marshall Tucker Band came from. In fact. Joey Cash, one of the guitarists, played with Paul Riddle (Marshall Tucker's drummer) in a band called Stanley and the Star Dusters. Also. Doug Cecil (drums) was a good friend of Riddle, and bought his Gretch drum set that was used in Marshall Tucker's earlier days Doug played that set on J Teal's album, "Cooks".

Billy Hardy (guitar) and Joey Cash (also guitar) had earlier played in a band called "Magic Weed" that was basically a house band for a road house on Hwy 29 between Spartanburg and Gaffney, SC called Pete's. According to old ledgers, Jimi Hendrix played there but Pete's is no longer there, so that can't be verified. Joey and Billy graduated from Georgia Southern University in 1974 and came back to Spartanburg to team up with Doug Cecil and his friend. Randy Johnson (bass and vocals). In 1975 and 1976. they were playing everything from Al Green to Aerosmith. Funky Southern rock, boogie-blues and a touch of 60's acid rock best describes them. Around this time, they rented a small house in the country on Davis Chapel Rd and turned it into their rehearsal studio.

After a cult following screamed for their original music, the band recorded "Cooks" in 1977 Hayne Davis was the recording engineer and also the producer who owned the small record company --Mother Cleo Productions. He worked some with Billy Joe Royal. Percy Sledge and Sledge Hammer, Toby King, Sugar and Spice, The Classic Four. High Cotton and others at the time. He did the re-mix of "Cooks" in the MCP Studios located in Newberry. SC near Columbia now called DaviSound. Barry Keel did the final re-master. J Teal signed with the booking agent. Eastern Atlantic Sounds. out of Raleigh. NC. And went on the road with high hopes but after a year or so the original line-up disbanded.

Doug Cecil left the band and was replaced by Joe Zalack and then J Teal once again hit the road playing full time until they finally broke up in 1979. In 1990 Randy and Billy tried to revive the band but with only minimal success. As Billy put it. "From 1990 to 1999 we went through so many drummers that I can't remember the names of half of them." But now with the re-release of their "Cooks" album, J. Teal Band has once again reformed with all of the original players.
CD Liner Notes 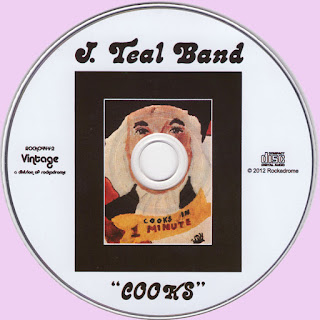 Free Text
the Free Text
Posted by Marios at 4:57 AM 3 comments: