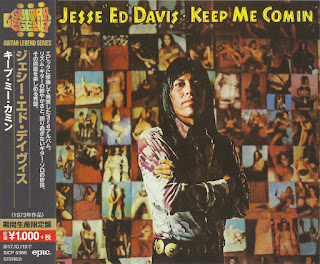 Charismatic Jesse Ed Davis was truly one of the rare breed known as a “guitarist’s guitarist.” On session after session in the late 1960s and 1970s, he epitomized the concept of playing for the song, drawing deeply from country, blues, rock, and R&B influences without mimicking anyone. He recorded with three of the Beatles and blues giants John Lee Hooker, B.B. King, Lightnin’ Hopkins, and Albert King. He appeared in the film Concert for Bangladesh and played sessions with Eric Clapton, Gene Clark, Neil Diamond, John Trudell, and many others. He released three solo albums on major labels. And yet despite these accomplishments, Jesse Ed Davis remains best known for his work on the early Taj Mahal albums and for being “the guy who inspired Duane Allman to play slide guitar.”

True, Jesse created the signature riff used by Duane for the Allman Brothers Band’s “Statesboro Blues,” as well as the bottleneck on Eric Clapton’s “Hello Old Friend.” But slide was just one facet of Davis’ widespread talent. He created many memorable hooks. Playing fingers-and-pick country on his trademark Telecaster, he could fire off multiple-string bends and double-stops as naturally as a Nashville cat. In blues settings, he made every note count, like a B.B. King or Mike Bloomfield. He delved into jazz. His uncanny feel for rock led to his becoming John Lennon’s guitarist of choice for the Rock ’n’ Roll album.

With his handsome features, long black hair, and moddish clothes, Davis cut a dashing figure onstage. He was one of very few Native Americans to achieve prominence in pop music, and today, almost three decades after his untimely death, he’s regarded as a hero by many young Native Americans.

Early in 1973, Jesse played guitar and sang backup on Bryan Ferry’s These Foolish Things, featuring many Roxy Music alumni, and joined a star-studded cast for Rod Taylor’s self-titled release on Asylum. He next played on Arlo Guthrie’s The Last of the Brooklyn Cowboys, which also featured Ry Cooder and Clarence White. He also released his third and final solo album, the self-produced Keep Me Comin’, which was devoid of guest stars. Instead, Davis relied on studio stalwarts – drummer Jim Keltner, bassist Bob Glaub, and keyboardist James Gordon. He co-composed four of the songs with John Angelo, calling his “Who Pulled the Plug” one of “the great Okie classics.”

Jesse Davis spent his final days living in Long Beach, California, where he sometimes counseled at the American Indian Free Clinic. On June 22, 1988, he was found dead in a laundry room in Venice, California, reportedly of a heroin overdose. His body was returned to Oklahoma for a traditional Comanche burial. In 1998, his first two solo albums were issued on CD by Warner/Japan.

In 2002, Jesse Ed Davis was inducted along with Dave Brubeck and Patti Page into the Oklahoma Jazz Hall of Fame. “Whether it was blues, country, or rock,” stated the official citation, “Davis’ tasteful guitar playing was featured on albums by such giants as Eric Clapton, Neil Diamond, John Lennon, and John Lee Hooker, among others.” For a kid who used to imitate Elvis in front of a mirror, Jesse Ed Davis had truly come a long way.
by Jas Obrecht 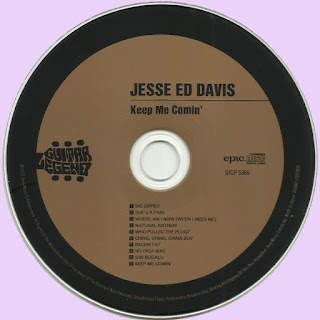 Free Text
Text Host
Posted by Marios at 7:55 AM 7 comments: