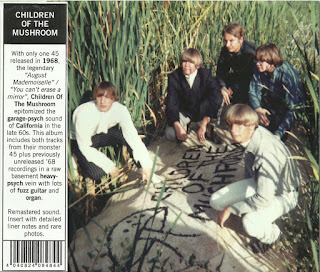 Back in the mid '60s there were lots of garage/psychedelic bands, that only released one or two singles and among them there were kids that apparently found out about psilocybin very soon. Children Of The Mushroom formed in Thousand Oaks, California, which is a small town near Los Angeles. First they were called The Captives and around the summer of love they became Children Of The Mushroom.

The band consisted of Jerry McMillen (guitar, vocals, flute), Bob Holland (organ), Al Pisciotta (bass), Dennis Christensen (drums) and Paul Gabrinetti (guitar, vocals). The band was inspired by The Doors, Iron Butterfly and similar groups, which appeared around the L.A area. In 1968 the Soho label out of Hollywood released their incredible single.

The A-side, 'August Mademoiselle', was written by Holland while the B-side, 'You Can't Erase A Mirror', was written by McMillen and Holland. 'August Mademoiselle' is one of the best garage/psych singles of all time in our opinion and consists of wicked Vox organ playing, huge amount of fuzz and the haunting atmosphere with crazy fast tempo that really blows your brains out.

'You Can't Erase A Mirror' is just the opposite; slow but again a very haunting number from the band. It's easy to say that the band represents the true garage spirit of the late '60s when there were tons of bands with one or two singles out. Some of them were good, some of them just OK, but the Mushroom people released one the most celebrated ones, which is a must to any psych/garage collector.
by Klemen Brezinkar 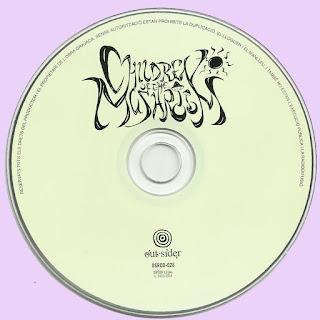 Free Text
Just Paste
Posted by Marios at 3:57 AM 17 comments: