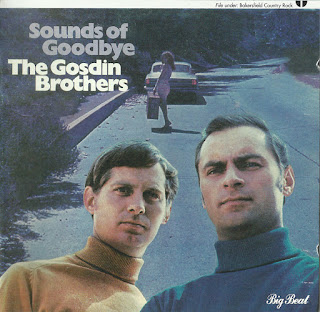 Once you've heard them, how can you not like the Gosdin Brothers? Their 1968 album SOUNDS OF GOODBYE is one of the most satisfying blends of country, pop and folk-rock that the era produced, yet because it was aimed at the country market rather than the hip scene, the record, and indeed the act's importance, has been overshadowed by the frankly more copy-worthy Byrds and Burritos. As charter members of the country rock brotherhood that included Clarence White, Gib Guilbeau and Gene Parsons - all of whom provided the sparkling musical support for the duos studio recordings - Vern and Rex Gosdin brought a knowing savvy to the music that was tempered by the innocent freshwater sensibilities of their stunning harmonies, and the unsurpassed warmth of Vern's lead vocal. With its array of fine songs, and sympathetic production by maverick Gary S Paxton, SOUNDS OF GOODBYE is a true jewel of early country rock.

On a personal level, this reissue has been a very long time coming. It was probably about 1982 that I first forked over a portion of my meagre student income to Alie at Rhythm Records in Camden High Street, in order to secure an original copy of SOUNDS OF GOODBYE. Like most neophytes, I knew the Gosdins only from their credit on Gene Clark's eponymous debut, a favourite record that even at that stage I had worn out almost as much as my treasured Byrds LPs. With its country-cool cover graphics and an intriguing tracklist, I reckoned this rarely-espied Gosdins album had to at least be worth a listen. I certainly wasn't prepared to fall so deeply in love with the voices, the songs, the sound. And in my amazement at Rex and Vern's complete lack of visibility in the vintage country-rock milieu, I felt just had to spread the word about this incredible duo.

In subsequent years I endeavoured to track down more of that magic Gosdin Brothers sound. I picked up copies of their mid-60s 45s, including the 1967 country hit Hangin' On, and the rare 1966 Edict Records single, produced by Chris Hillman. I somehow acquired lo-fi copies of unissued material from the same period. And most importantly, I learned of Vern Gosdin's enormous stature in the back to basics 'hard' country movement of the late 1980s and early 1990s, where he had numerous number ones and became known amongst his legions of fans as the Voice, all without altering one iota the style or sound he had espoused with brother Rex in the late 1960s.

Which brings us to this compilation, of which I am most proud. It collects together the contents of the SOUNDS OF GOODBYE album, plus the aforementioned non-LP singles on World-Pacific, Edict and Bakersfield International, and some truly stellar unissued sides. Foremost is Tell Me, an out-take from the Edict session featuring accompaniment from Hillman, Michael Clarke and Clarence White, the jaw-dropping final fifty seconds of which are concrete proof that technically and melodically, White was already in a class of his own on electric guitar. Yep, it's that good.

Putting this thing together has been a blast too, as it has been with all the Big Beat Bakersfield releases - whether it be remixing those fabled out-takes, gleaning words of wisdom from biz legends Gary S Paxton and former Byrds/Gosdins manager Jim Dickson, or hanging out with the brothers' former collaborators Chris, Gib and Gene. But perhaps the most fun of all was the time Cindy and I amusedly looked on as Vern, draped in enough chains and jewellery to make a rap star envious, held court in a Cracker Barrel restaurant near Opryland, enduring a never-ending procession of middle-aged fans ooh-ing and aah-ing over him - not to mention the repeated insistence of the waitress in passing on her latest demo tape. And Vern was loving every minute of it. I realised that, to these folks at least, the Voice is still very much a country music superstar. As he should be. Take a listen to SOUNDS OF GOODBYE and see if you don't agree.
by Alec Palao 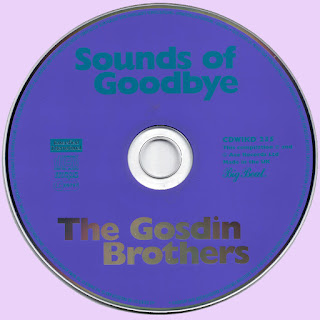 Free Text
Just Paste
Posted by Marios at 6:39 AM 10 comments: