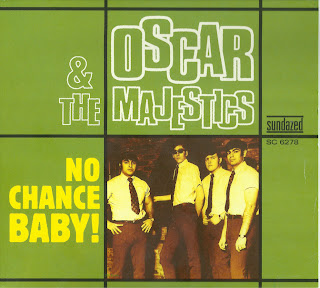 Gary, Indiana is not a town known for being a rock 'n' roll hot spot, so Oscar and the Majestics' status as the best band in town in the mid-'60s might not seem like much, but the recordings they left behind suggest they could have moved to a number of bigger, cooler cities and still been close to the top of the heap.

Leader Oscar Hamod has a voice that capably fused soul and garage rock influences, his fierce, agile guitar work roared with energy and attitude, and his backing combo -- Robert Wheeler on rhythm guitar, Sam Hamod on bass, Vince Jacim on drums -- was a rock-solid rhythm section that could also deliver great harmonies.

Oscar and the Majestics cut a handful of fine tunes for Chicago's USA Records label, which were included on Sundazed Records' 2009 collection 2131 South Michigan Avenue: 60's Garage & Psychedelia from USA and Destination Records; on No Chance, Baby!, Sundazed fills the gaps in the band's history by including all their USA releases, as well as the singles the band released on their own label, delivering everything they released in the decade.

This collection follows the Majestics as they evolved from R'n'B and blue-eyed soul into tougher rock 'n' roll material, ending with their proto-psychedelic cover of "House of the Rising Sun." Despite the presence of red-hot covers of "I Can't Explain" and "Soul Finger," originals dominate this collection, though you might not guess that on first listen; while Oscar and the Majestics were clearly a talented band, their songwriting was quite derivative, and "Why-O" bears a certain resemblance to "Stranded in the Jungle," "I Feel Good" favors "Til the End of the Day," "Fanny Brown" pretty much is "Farmer John," and "Come on Willie" could pass for a speeded-up "Hang on Sloopy" in dim light.

But if the band didn't have a gift for dreaming up great riffs, they could play the hell out of anything they approached, and No Chance, Baby! proves that Gary's finest were one of the great acts on the Midwest teen scene in the mid-'60s. If you dig pre-psych raunch played with fire and precision, this will earn a favored spot on your personal playlist.
by Mark Deming 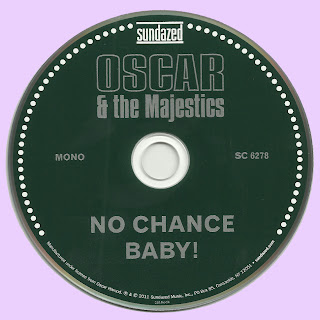