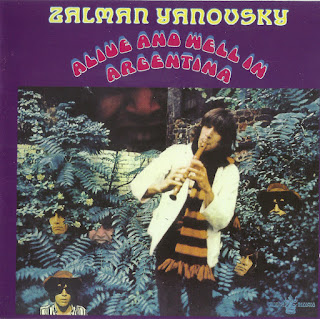 I know at least one of his fellow supposedly-lovin' Spoonfuls resents the situation to this day, but whenever Zal Yanovsky appeared on stage alongside John Sebastian, Joe Butler, and Steve Boone during their halcyon daze in the mid-swinging Sixties, some poor girl in the audience would inevitably capsize the entire proceedings by screeching out a heartfelt, lung-felt, 16-year-old cry of "ZALLY!" at precisely the most inopportune of moments (i.e.; just as Sebastian would sensually lean into his mic to softly croon how he didn't want to have to do it). And then, like some completely-wound-up playtoy suddenly let free to dash across the nursery floor, Zally would take this as his cue to mug wildly into the nearest camera, bouncing up and down on one or more legs, before capping it all with a toss of his trademark ten-gallon sheriff's hat high up into the lighting rig, with often quite disastrous results.

All such strategically-enacted cartoon antics aside however, those who weren't lucky enough to be a part of a Lovin' Spoonful audience circa 1966, nor even care to obsess today over video footage of the band easily rivaling the circus atmosphere of a typical Ed Sullivan Show, can still marvel at the cockamamie genius that was Yanovsky by listening to the guitar breaks illuminating any of the four-dozen-or-so Spoonful songs Zal contributed his peculiar, fleet-fingered artistry to. Personally speaking, five notes into that "Do You Believe In Magic" solo made ME a disciple for life, yet an absolute wealth of such four-bar flashes of quicksilver, Music City grit exist throughout the Spoonful's loving canon of good-time rock. Mr. Sebastian has frequently gone on record over how his trusty right-hand guitarist could sound like Elmore James one moment, Floyd Cramer the next, then play just like Chuck Berry a-ringin' a bell -- sometimes all simultaneously! -- and all at the drop of a single ten-gallon hat. In fact, the deliciously crazed six-string acrobatics Zally laid all over the "What's Up, Tiger Lily?" score was only one of many reasons that very first Woody Allen movie remains, at least to these eyes and ears, the myopic li'l director's absolute best.

More magnificent still was the equally cinematic vision Zal brought to his first and sorrowfully lone solo album, "Alive And Well In Argentina." This thoroughly bent 1968 concoction kicked off with a decaying rendition of the Canadian National Anthem superimposed over a chorus of croaking tree frogs (oh, Canada indeed!) then dove headfirst into a near hour's worth of true, Yanovskized dementia (classic maul-overs of "Little Bitty Pretty One" and "You Talk Too Much," plus a six-minute-plus tone poem entitled " Lt. Schtinckhausen" complete with, true to the album's theme, stereophonic storm-troopers). A 1971 re-release of this monumental long-player also included Zal's non-hit single from the Summer of Love, "As Long As You're Here," written by that ace songwriting duo hot off a couple of Turtles chart-toppers, Gary Bonner and Alan Gordon. One of the era's sillier seven-inch single slices of surrealism, the original vinyl disc included the entire A-side re-spooled BACKWARDS on the flip (sure, Napoleon XIV might've done it first with "!Aaah-ah Yawa Em Ekat Ot Gnimoc Er'Yeht," but Zally always was the living, strumming embodiment of any Top Forty funny-farm you'd care to inhabit). "Is it a hiiiiiit, or a misssssss?" a chorus-from-hell wailed over and over as the song faded but, well, both single and album WERE unmitigated misses it's tragic to recall. Still smarting over his recent drug-bust-induced departure from the Spoonful (both Zal and Steve were popped holding the goods, the Feds threatened to deport the former if he didn't identify his dealer, Zally snitched but was sent packin' straight back to the Great Wide North irregardless, and a Rolling Stone Magazine-sanctioned boycott of all things S-ful ensued) our hero was obliged to pen his very OWN review of "--Argentina" for the Toronto Daily Star newspaper. But alas, despite Sebastian swathing himself head-to-toe in tie-dye at the Woodstock fest, the band's hip(py) factor was irrevocably doomed and Yanovsky's name especially remained Bay Area mud for the remainder of that flowered era.

So no longer a Lovin' anything ("the band was like a marriage with four people in it," he later recalled. "As I look back, I opened the door and they kicked me out"), yet characteristically nonplussed following a couple of projects spent next with Tim Buckley and Kris Kristofferson, Zal unceremoniously hung up his guitar almost for good and by the Seventies found himself BEHIND the lens for a change, producing a Canadian afternoon court-TV (quel irony!) semi-reality series called "Magistrate's Court" before appearing as the petulantly potty-mouthed voice-of-reason alongside Alice Cooper and Mick Jagger in the scathing 1975 documentary "Rock-A-Bye" (in which, among several other things, Zally brought serial swearing to prime time a full quarter century before those Osbournes).

But if there's one thing a musician doesn't just love to do besides playing, it's eating, and of course Zal went even that vice one better by opening up his very own restaurant inside a landmark Kingston, Ontario livery stable. Chez Piggy, along with its sidekick bakery Pan Chancho, kept Zally literally cookin' throughout the final chapters of his tumultuous life, and I'm proud to claim that whilst on the road with the Dave Rave Conspiracy combo I had the pleasure of lunching within the fabled walls of Chez Piggy myself. In fact, it's rumored that our guitarist at the time had once actually dated Zal's daughter Zoe, so armed with this information -- and pledging my undying love of "Alive And Well In Argentina" -- we relayed a request for the man himself back to the kitchen as dessert was served. Unfortunately Zally never did bless our table personally, and I had to wait nearly another decade to spot the man again on late-night Canadian TV, hawking his cookbook whilst most indiscriminately dumping wine all over a shrimp platter-in-progress. I am happy to report however that this fleeting appearance demonstrated the man had not lost one single inch of his Ed Sullivision-era zaniness.

More recently, Zal rejoined his former bandmates for their 2000 induction into the so-called Rock and Roll Hall of Fame ("a big media event that's over in two seconds," he so aptly put it upon arriving back home in Kingston) and then almost accompanied John Sebastian on a brief tour of England shortly thereafter. Twas not to be, however, as Zal succumbed to an attack of the heart on his farm on, wouldn't you just know it, Friday the 13th of December, 2002. It was certainly a dark, dark day for lovers of good-times AND music the world over.

"There was not any book anywhere that he followed," eulogized his fellow Canadian and fellow former Mugwump Denny Doherty, "and he is gone too soon." But in reality the magical mayhem of Zal Yanovsky will live on, wherever and whenever one might hear a lightning-brilliant burst of electric guitar in the middle of some three-minute jug-pop oldie --or see an over-sized cowboy hat flying high out of the frame at exactly the wrong moment. In his memory then, let's just let the boy Rock and Roll.
by Gary "Pig" Gold, July 12, 2017 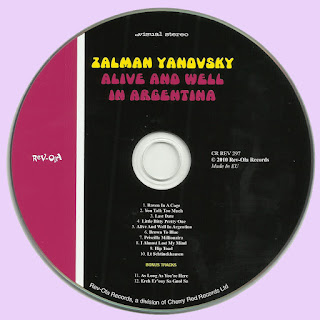