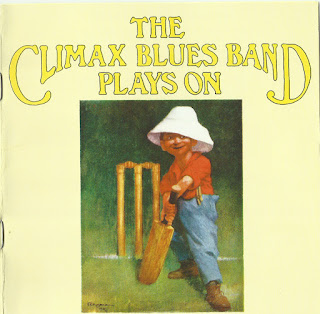 Britain's Climax Blues Band didn't waste any time following up their self-titled debut in 1969 (dropping the moniker The Climax Chicago Blues Band), as they once again entered EMI's Abbey Road studios and put together Plays On, a highly adventurous and varied affair that saw plenty of new elements starting to creep into their once straight Chicago styled blues sound. The band had then slimmed down to a five-piece, consisting of Colin Cooper (vocals, sax, harmonica, bamboo whistle), Peter Haycock (guitars, vocals), Arthur Wood (keyboards), Derek Holt (bass, Mellotron), and George Newsome (drums). It was at this juncture that the band started to experiment with rock and jazz, and mixed with their already formidable blues chops the results on Plays On are quite spectacular. Esoteric Recordings continues on with the CBB reissues, giving this one stellar, crystal clear sound and another info packed booklet.

The album opens up with the lengthy jazz-fusion instrumental "Flight", a scorching piece highlighted by tasty interplay between all the players, especially Cooper's collection of reeds and Haycock's guitar. It must have been quite puzzling for fans of their blues soaked debut to pop on Plays On and hear this blast of awesome jazz to kick off the record. "Hey Baby, Everything's Gonna Be Alright, Yeh Yeh Yeh" sees the band returning to gritty blues, complete with scalding guitar solos from Haycock, but they go right back to jazz with a Latin flavor on the engaging "Cubano Chant", featuring some tight grooves, nimble piano, and some wild bamboo whistle lines from Cooper (who needs a flute, right?). On "Little Girl" the band add in some meaty rock riffs & organ to their blues base, another killer instrumental that also sees Cooper deliver some great sax melodies.

Wood tosses in the theme from '2001: A Space Odyssey" using organ, Moog, & Mellotron on the spooky, psychedelic piece ""Mum's the Word", a track for all the prog lovers to seek out, before the slide guitars from Haycock lead in the raunchy ragtime blues of "Twenty Past Two/Temptation Rag". Emotional, slow blues with yearning vocals can be heard on "So Many Roads", while the upbeat organ/guitar vehicle "City Ways" has plenty of swing and groove to it. The final tune on the album, "Crazy Bout My Baby" reminds of the material from the debut, and has a certain 'Peter Green era-Fleetwood Mac' feel to it.

Once again, Esoteric has unearthed some scorching bonus tracks here on this reissue; "Like Uncle Charlie" is a bluesy hard rocker complete with red-hot guitar licks from Haycock and an almost proggy middle section filled with sumptuous organ and layers of psychedelic vocals, and "Loving Machine" also sees the band rocking harder, driven by Haycock's stinging lead guitar."Dance of the Mountain King's Daughter" is another stab at jazz for the band, and has an almost Frank Zappa feel to it, but it's a shame the song isn't longer. There's also another mix of the Allman Brothers Band influenced "Flight" for good measure.

Though the band would go on to even greater heights with albums like Gold Plated, Flying the Flag, Sense of DIrection and others, Plays On is Climax Blues Band at their 'risk taking' best, as they basically said 'to hell with anything remotely commercial' and just went for it here. As such it's their most complex offering from a musical perspective, easily appealing to jazz-fusion, rock, prog rock, and blues fans alike. Incredible stuff!
by Pete Pardo 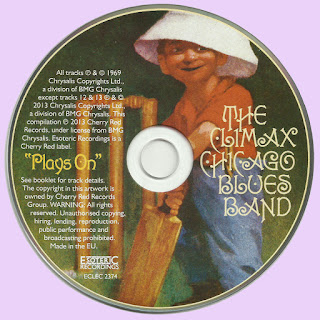 Free Text
Text Host
Posted by Marios at 8:16 AM 22 comments: