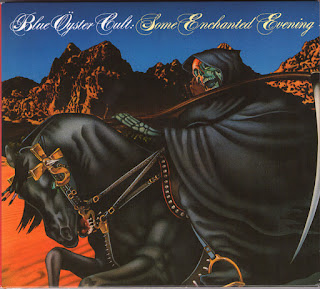 Even though their previous studio release, Spectres, was one of the best selling albums of their career it just didn't live up to the monstrous ideology of that Blue Oyster Cult had created with such seminal releases as Secret Treaties and Agents of Fortune. Everything was there, to be true—searing leads, wonderfully out of place vocal harmonies, taut rhythms—but something was also missing. Funny thing is that it was almost as if the band knew that themselves and purposely realized that they needed to release a scorching live album to the public in order to reclaim some of that raucous bar band blast they were once so (in)famous for bringing.

To wit Some Enchanted Evening kicks off with "R.U. Ready 2 Rock," one of the more catchy, but also more lackluster offerings from Spectres. Needless to say, the live version is everything the studio version wasn't: it's loud, brash, and lives up to its title in every way, chugging and lunging out at the Atlanta audience with bristling energy and showcasing the band in their true element.

With "E.T.I. (Extra Terrestrial Intelligence)" the band keeps the energy levels in the red, the familiar guitar lick driving the crowd into a frenzy as Buck Dharma lets loose with some scorching mutant blues. This is still one of the best captured versions of this searing number out there. By the third song, the epic "Astronomy," the band is in full swing and showing and proving that they really can't f@#k this one up.

From the intricate and sweeping grandiosity of "Astronomy" the band kick full bore into the blazing cover of the MC5 classic "Kick Out The Jams." BOC simultaneously stay true to the original Detroit rock fever of the original while putting their own New York certified stamp on it. That it mudslides right into a turgid rendition of "Godzilla" is all the better, too. While the original version found on Spectres is a bona fide classic its given a breath of hot, magma filtered air in a live setting. Coupling it with "Don't Fear The Reaper" is altogether a smart move, both for the folks who were at the show twenty years ago and for those of us reliving the experience vicariously.

The set is rounded out with a wonderful take on The Animals "We Gotta Get Out Of This Place." Rolling along to Dharma's crisp guitar leads and snappy basslines from Joe Bouchard. It's a meandering lull that will suck you in. But there's a punch line: the track grows from a lumbering lope into a full-blown growl and snarl, from the vocals and guitars down to the flailing drums and rumbling bass. As brilliant as those fools who brew Guinness.

The original seven song version of Some Enchanted Evening is perhaps the best introduction one could have to the bugged out world of Blue Oyster Cult. The band presents some of their best material in a manner that is not only true to the studio recordings, but also delivers them with unmistakable energy imbued in a live setting. Give this to any BOC virgin and they'll be able to tie a cherry stem into a bow without thinking twice.

As for the bonus material, the new version tacks on an additional seven tracks to recreate the original vision of the album (it was initially intended as a sprawling double live album, but later trimmed down to the single disc version most hardcore heads will no doubt have tucked away in a dusty crate somewhere). While cuts like "ME-262" keep the energy levels on tilt, they also feel somewhat out of place. While only the first four tracks of the original issue were recorded in Atlanta, the remaining three were mixed so that it sounded like one singular show. In similar fashion the bonus material is made up of four tracks recorded in Detroit, buffered by selections from shows in Little Rock, Rochester, and Boston.

"Harvester Of Eyes" is a charging, old school BOC rocker. "Hot Rails To Hell" follows suit, the guitar skirling and cantankerous in a menacing bleed of grunge encrusted blitzkrieg. "This Ain't The Summer Of Love" gets a drastic overhaul, sounding edgier and heavier than the studio version. And "5 Guitars" is just as the name implies. Sort of. It begins with a rolling bass swatch and snappy snare drum shuffle before blowing out into nothing but six-string sizzle. At 8-minutes and 33-seconds it's also the longest track on the album. The bonus portion concludes with two covers: the pretty staid "Born To Be Wild" (with the exception of the over-the-top keyboard solo) and another version of "We Gotta Get Out Of This Place."

Whereas the original seven song live album feels like a whole, mixed to sound like a snapshot of a single show and presents all sides of the band, from balls-to-the-wall rock to textured, nuanced almost softly psychedelic allusions, the second seven song section feels like a completely different show, one where the band is hell-bent on recapturing their garage rock roots. It might have been cool to have had them sequenced in such a way that it sounded like one show instead of two distinctly different ones buffered up against one another. Oh yeah, for the seriously hardcore there is an accompanying DVD of a show from Landover.

All in all the new, expanded version of Some Enchanted Evening is a ripping good time that showcases Blue Oyster Cult at the top of their arena rock game. In many ways this album even eclipses some of their studio efforts and works as a welcome shift from their impending slickness that began on Spectres and carried over into some of their later work, as well.
by Spence D.  27 Mar 2007 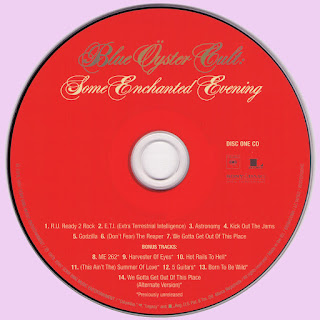 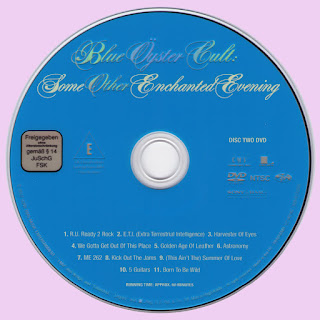