Funkadelic - Free Your Mind And Your Ass Will Follow (1970 us, super heavy soul psych, remastered with bonus tracks) 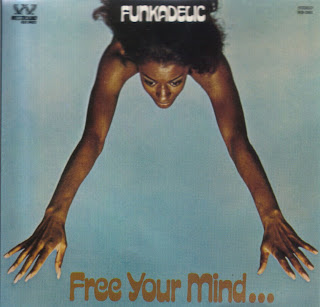 Conventional wisdom has it that Maggot Brain is the definitive early Funkadelic record, but for me, Free Your Mind… And Your Ass Will Follow best represents what the band – in their first acid drenched psychedelic funk incarnation – were really all about. Allegedly recorded in a single 24 hour session so that producer and band leader George Clinton could “see if we can cut a whole album while we’re tripping on acid”, Free Your Mind… is a nasty, clawing, scratching, messed up concoction of pysch funk guitar mayhem from start to finish. It’s easily Funkadelic’s noisiest and least immediately accessible album. It’s also a stone cold killer.

The opening title cut, ten minutes of squalling feedback drenched sound effects, drone rock and freaky lyrical chants, immediately demonstrates everything that’s wrong with trying to cut a record while heavily under the influence of hallucinogenics… and everything that’s so right about it. A more reflective (or sober) producer would surely have brought Eddie Hazel’s chugging guitar riff out to the forefront and rocked the track out from the get go. Instead, it’s faded teasingly in and out of the mix in a white squall of space age studio effects. Somehow, it still manages to work. “Free your mind and your ass will follow – the kingdom of heaven is within” the band chants amid the chaos, kicking off Funkadelic’s characteristic subversion of religious themes into quasi mystical party jams. The track resolves itself by breaking down into an extended, trancy organ solo by Bernie Worrell. Heady stuff.

Friday Night, August 14th, to my mind, is one of the most underrated cuts in the Funkadelic canon. It’s possibly the band’s hardest rocking track - a great slice of Hendrix inspired heavy guitar groove. Hazel’s riffage is thick, fuzzy and dirty sounding on this one, and the sound mix is rough as hell, but, if anything, this only serves to accentuate the track’s primal urgency. George Clinton was still learning his trade behind the production decks at this point. Later releases would feature a much more accomplished studio sheen, but in the early years the lack of polish became a part of Funkadelic’s signature sound. Free Your Mind… is an angry, buzzing, hissing record, fairly seething with an atmosphere of proto-punk menace.

Funky Dollar Bill is one of Funkadelic’s classic early singles. It’s a loose, raunchy funk rock stomper with more instant appeal than any other cut on the album. The band’s lyrics would get more pointed and wildly creative as time went on, but Funky Dollar Bill is an early example of Funkadelic’s wry, playful and slightly cynical worldview. Everybody knows that chasin’ a dollar ultimately gets you nowhere, but everybody keeps chasin’ a dollar anyway.

It’s immediately followed up by another classic single, and arguably the greatest of all the early Funkadelic tracks, I Wanna Know if it’s Good to You. The Eddie Hazel riff that drives the song is nothing less than inspired; an insanely funky wah-wah guitar lick that taps directly into the brain’s auditory G-Spot and then refuses to let go. It was the sound of Hazel’s guitar that was front and centre on all of the early Funkadelic records, his licks poured out all over them like white hot liquid gold. Criminally overlooked in the usual, tiresomely predictable magazine polls listing the greatest ever rock guitarists, Hazel was nothing less than the lineal successor to Jimi Hendrix. Not quite as flashy, maybe, but with a greater knack for turning out instantly killer funk rock riffs. Hazel breaks out into a searing, stinging guitar solo in the second half of the track – one of his finest in a terrific arsenal of inspired solo work – as Bernie Worrell vamps away on the organ. Tantalisingly, the tape fades out just as Hazel is poised to bust out with another lyrical passage of solo play. Man, I’d love to hear the studio out takes from this track.

The album shifts gears somewhat at this point with Some More, a rather more sedate number that trundles along on an amiable blues rock groove. It’s hardly one of Funkadelic’s most memorable moments, but it’s inoffensive enough and settles the palette after the preceding 25 minutes worth of psych guitar freak outs. The album closes with Eulogy and Light, one of the more bizarre experiments in Funkadelic’s back catalogue. It’s essentially snippets from Open Our Eyes – an early Funkadelic song – played backwards and mixed in with spaced out studio effects. It’s accompanied by an eerie chant that subverts the Lord’s Prayer into a satirical comment on consumer culture, before descending into abstract, vaguely sinister wordplay. It’s very much a product of its time, and as with many such acid fuelled ventures into studio experimentation – like say, The Beatles’ Revolution 9 – it’s not something you’d necessarily want to listen to repeatedly.

Clocking in at just under 31 minutes, Free Your Mind… And Your Ass Will Follow is a brief album, even by the standards of its 1971 release date. But it’s stripped of extraneous fat and there’s a refreshing lack of dud tracks, even if the last couple probably won’t be played through on every listen. It’s too rough and unevenly formed an album to be declared an outright masterpiece, and those in search of perfectly realised composition or elegant song craft had better look elsewhere. But Funkadelic were never really a “song” band. They were all about kickin’ out the jams. You either get on board and follow them deep into the groove, or you stay at home altogether. But if you can’t get enough of nasty sounding guitar freak out music, fulminating in a lethally funky psychedelic stew, then it just doesn’t get any more intoxicating than
Free Your Mind… And Your Ass Will Follow.
by The Grand Inquisitor 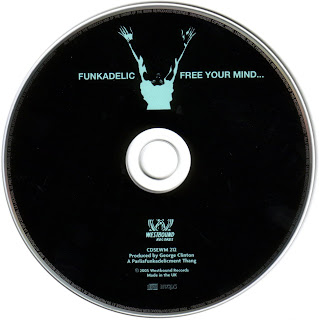