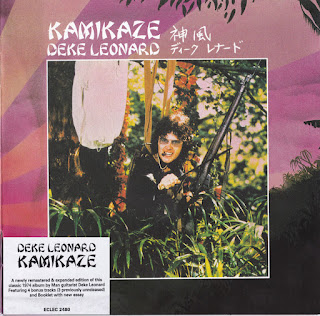 Having released his debut solo album Iceberg in 1973, Deke Leonard formed a band of the same name to tour it. Original bassist Paul Burton was replaced by Martin Ace by the time Kamikaze was recorded, in typical fashion in between live dates promoting the first album. Another of Deke’s narratives describes the cover shoot. The tale involves searching for big cats, Jumbo jets, and being drenched to achieve the desired photographic intent, and so another chapter in Deke’s life on the road is written…
This record, not surprisingly, sounds more like a band than Iceberg, although oddly it is not as immediate as its predecessor. Kamikaze again features Deke’s penchant for good time rockers, kicking off with Jay Hawk Special. The addition of fiddle player Byron Berline on the initially bluesy Sharpened Claws playing a rumbustious jig’n’reel in the second half of the song lends it a downhome countrified feel, and as the song ends Byron’s fiddle carries on, a lone hoedown after everyone has gone home.
Deke’s vocal on the Quo-like rocker In Search Of Sarah And Twenty Six Horses bears an uncanny resemblance to Noddy Holder, something I had not considered before, but the resemblance is definitely there. You would think from the title that this song was inspired by a CS&N styled drug-fuelled haze, but the straight ahead nature of the music puts paid to that theory. Deke explains further in a convoluted tale involving a girl called Sarah Cheesewright and a book entitled Portrait Of The Artist And 26 Horses, another example of his way with a story.
The personnel on the concluding track of the album proper Devil’s Gloves is a Man line-up in all but name, and points the way for the future, as Deke rejoined his natural home soon after the release of this album. The song itself is a charging energetic romp that crosses Deke’s R&B sensibilities with the soon-to-be new Man line-up’s taste for a different twist on funk rock, here driven by Terry Williams’ drums in tandem with Dave Charles’ congas.
The best of the bonus tracks is an early version of California Silks And Satins which would of course later appear on Man’s Rhinos Winos And Lunatics album. Co-written with former Help Yourself singer and songwriter Malcolm Morley, this first version is more electric and more strung out, and very “West Coast” in feel. Morley was another who joined Man’s new line-up a few months down the line.
Kamikaze and Iceberg before it showcase a songwriter in fine form, and as one of the bonus tracks here has it, Deke Leonard is definitely a joyful soul. If you’re a fan of Man you probably already have these two albums, but isn’t it about time you replaced those well worn vinyl copies with these pristine remasters?
by Roger Trenwith, 6th May 2015 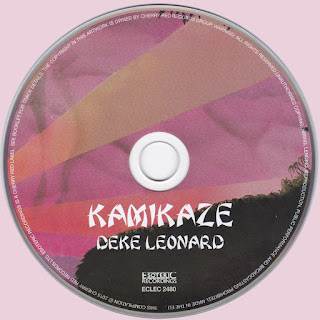 Free Text
Just Paste
Posted by Marios at 4:23 AM 10 comments: