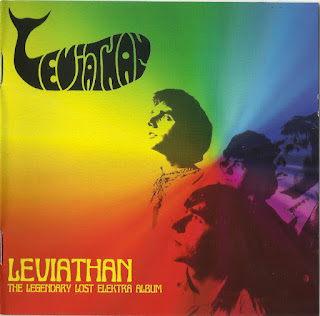 The Brighton band Leviathan, previously known as Mike Stuart Span, featured in one of the very best TV programmes ever about Pop Music. It is also unintentionally very funny indeed. In their episode “Big Deal Group”, part of BBC’s “A Year In The Life” series, “the Span” begin as a group on the up being managed by the hapless Mike Clayton, who demonstrates his acumen early on by signing away an extra 5% of their earnings to a booking agency for seemingly doing nothing much at all. Clearly way out of his depth when it came to the London Showbiz mafia and not exactly a Peter Grant figure, it was no surprise when he and the group parted company after a series of mishaps, including an underwhelming television appearance and unwisely buying a record shop on the royalties from a non-selling single. This left the Mike Stuart Span forlornly rehearsing at a local Youth Club, contemplating a spell working on building sites instead of the glamour in the last dying breathes of Swinging London. Of Clayton, we saw no more.

After this inevitable parting of the ways, something new was needed for the band. Luckily a deal with US label Elektra, home of the Doors and Love amongst others, came out of the blue on the proviso that the group’s name be changed to the more 1969 sounding Leviathan. Though not that enamoured with the new moniker (and the decision on this came right from the top, from none other than Jac Holzman, Elektra president), the band generally welcomed this unexpected upswing in fortune.

The tail end of “Big Deal Band” shows Clive Selwood, John Peel’s mate and now the band’s handler, attempting unsuccessfully to hustle the newly rechristened Leviathan some air time on the Kenny Everett radio show. Presumably it was also Selwood’s idea to release two singles by the band on the same day – the kind of ploy that rarely worked, but I suppose desperate times called for desperate measures. By the time the documentary aired, the band were no more, their dreams of UK and Stateside success dashed when Elektra (and Holzman again being personally involved) rejected their first attempt at making an album. They told them to go back and try again, but by this time Leviathan had run out of money and with nothing forthcoming from the US, that was that.

The LP that they recorded has remained in limbo ever since, apart from a brief vinyl release a short while back, but now we can hear it in all its glory, nearly 50 years after it was recorded. And, despite at times taking rather too strongly an influence from the preeminent UK band of the time Cream, it is a beaut. Though looked upon as a change from the “Psychedelic” Mike Stuart Span to a more “Progressive” sound, it’s not a startling alteration of style. Leviathan do occasionally fall back on the kind of “Blues” jamming that tended to rule in Blighty at the time – but for the most part inventive, catchy Heavy Psych/late period Freakbeat is the order of the day.

Their best single “Remember The Times”, cruelly missed out on the charts despite being on a par with great bands like the Move and there’s a touch of “Sunday Afternoon” era-Kinks in the mix, very agreeable indeed. Though a touch more guitar gung-ho than in their Span years (even further back they started as a Soul band with a full brass section), they still manage to make a catchy concoction of their contradictions (i.e wanting the fame and fortune that success would bring, but also a need to be “taken seriously”). Occasionally they trip over into self-parody, with the multi-section anti-war “War Machine” making one stifle a few giggles but feel a bit mean afterwards, as they were undoubtedly being earnest. “Flames”, another single side, manages to neatly bolt together the Progressive and Pop with a complicated guitar riff dovetailing nicely with a doleful but memorable song. They never lost their Pop smarts, though perhaps “Evil Woman” does go a little too far down the “Clapton Is God” path. “Just Forget Tomorrow”, another side of the ill-fated double single, is another good one. At times they had a bit in common with the Who of the same period, with strong vocals complimenting powerful but fluid instrumentation. Also Leviathan had the advantage of not having to weld their cracking tunes to an unwieldy concept unlike Rog and the boys.

“Leviathan – The Legendary Lost Elektra Album” may well have disappeared without making much of a ripple even if it had seen the light of day back in 1969, knowing the band’s luck, but that is not to blind us from its many good qualities. Though Leviathan were never destined to make the higher reaches of the charts and struggled to even get their records released, they had an innate skill for producing excellent Psychedelic-toned Pop Music and finally, all these years later, we have the proof.
by Ian Canty 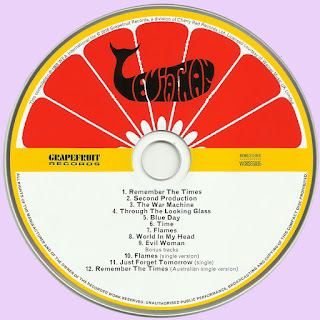 Free Text
the Free Text
Posted by Marios at 4:07 AM 8 comments: