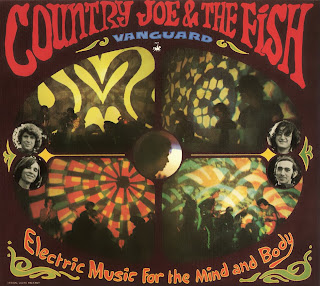 For many, 1967’s “Electric Music For The Mind And Body” is the premier, defining moment when the attitude and philosophies of the emergent 1960s counter-culture were actually matched by what was in the grooves. The rabble-rousing element of much of Country Joe & the Fish’s subsequent career – the Fish Cheer, Woodstock and their sarcastic musical stance – obscured the fact that the group was responsible for some of the most evocative and striking sounds associated not just with their native San Francisco Bay Area, but the entire late 60s rock movement.

More importantly, over the years, “Electric Music” has transcended the era of its creation and remains a truly bold and powerful musical statement. Our new 2CD reissue celebrates the fact with the kind of presentation this cornerstone album has long deserved.

Country Joe & the Fish had only really been an electrified unit since early 1966, having emerged from the insular, politicised Berkeley folk scene. Out of the initial chaos, a distinct style evolved: a combination of “Country Joe” McDonald’s strong songwriting and a wilful desire of the musicians to reach out to the extremes of their capabilities. The first evidence of the band’s unique sound came with their second self-released Rag Baby disc (available on “The Berkeley EPs” CDWIKD 153).

The latter half of 1966 saw the band make inroads into the burgeoning adult rock scene of San Francisco. Original members Paul Armstrong and John Francis Gunning were jettisoned, David Cohen’s organ began to take a larger role in the sound and each player developed their own adroit musical personality, lead guitarist Barry Melton in particular taking to his role with gusto. Bassist Bruce Barthol and new addition Chicken Hirsh on drums made equally distinctive musical contributions, but the centre of the Country Joe sound was the distinctively structured material, by turns angular and romantic, that McDonald brought to the table.

By the time they entered the studio in February 1967 to make their debut for venerable NY folk label Vanguard, Country Joe & the Fish were in the ascendant. They were now one of the hippest and hottest groups in the Bay Area, known for eclecticism and musical unorthodoxy.  The ensuing sessions reflected this with a programme of cutting-edge, frequently original excursions into frontiers unknown, such as the wide-eyed waltz time in ‘The Masked Marauder’ or the elegiac mood music of ‘Section 43’. ‘Bass Strings’ and ‘Superbird’ were knowing and ultra-hip, with a psychedelic nod and a wink, and a sideways glimpse of the biting political satire the group employed on stage.

This deluxe edition is the first time producer Sam Charters’ original stereo mixdown of “Electric Music For The Mind And Body” has been reissued on compact disc. In the decade after the album was first released, the 2-track master suffered irreparable tape damage and oxide loss. In the early 1980s, a decision was made by Vanguard to remix the record, and that is how it has appeared in subsequent repackages.

The mono mix, which has notable disparities to the stereo, has also not been available since the late 1960s. All the members of the group as well as Charters and manager ED Denson contribute to a lengthy and illuminating note, accompanied in the booklet by many eye-catching examples of the iconic art that was associated with Country Joe & The Fish in their early years. As McDonald proudly but quite accurately puts it, “If you want to understand psychedelic music, and you haven’t heard “Electric Music For The Mind And Body”, then you probably don’t know what you’re talking about.”
by Alec Palao 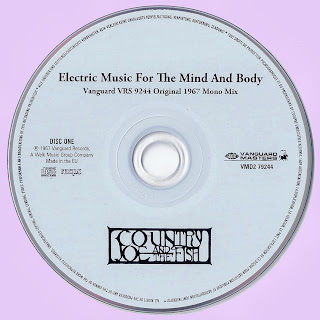 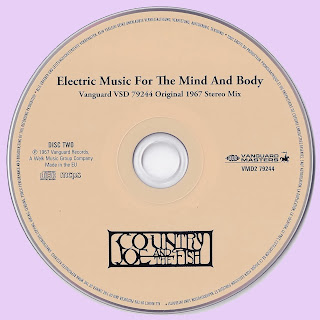