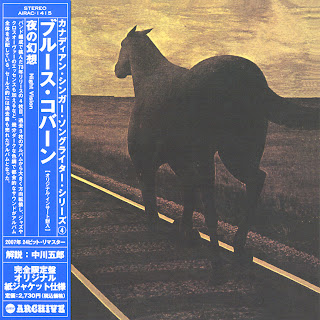 Thus abandoned and solitary in the world, human beings are forced to confront their own freedom, a freedom to choose that is both demanding and deadly serious. One of Colville's best-known works, Horse and Train, goes straight to the heart of this source of human anxiety and raises an essential question: can destiny be altered? A helpless witness to imminent disaster, the viewer of this painting can never know the outcome.

Clearly, the train cannot deviate from its track, but the horse has a choice - we think. Is it mesmerized by the light? Is it challenging a foe? Is it aware of the terrible danger? If not, can the engineer stop the train in time? The animal may be driven by instinct, but the human faces an ethical dilemma: Is it worth stopping? How much does the death of a horse matter? Which is more dangerous - to brake and cause a possible derailment, or to keep going and risk a deadly collision? Can we halt time - the little that remains?

The picture was inspired by a poem published in 1949 by the South African writer Roy Campbell. Words by Wilfred Owen serve as the poem's epigraph: "None will break ranks." The poem itself includes the lines: "Against a regiment I oppose a brain / And a dark horse against an armoured train." During his military career, Colville had exhibited an independence of mind that was not always appreciated by his superiors; it is a characteristic he subsequently cultivated, like his opposition to the various forms of 20th-century abstraction.

In Horse and Train, the artist seems to be emphasizing the unavoidable need to make choices: despite the apparently hopeless situation and the magnetic power of the train's light over the animal, we are witnessing a confrontation between two freedoms. The horse is free to change direction, the engineer to engage the brakes.
From The Original Liner Notes

"I think it was Christmas of '73, I was given a book featuring the work of a Canadian painter whose name was new to me. The paintings were striking - perfectly executed, realistic, but with a depth, a kind of transcendence that spoke to me of a larger reality. One painting in particular jumped out at me. In it, a well-muscled black horse gallops headlong down a railway track, straight at an oncoming train.

The horse seems to contain such energy, it's as if it were a charged particle of pure spirit. This sense of spirit, in confrontation with material power, is something any artist can relate to. A sense of impending doom too, I think. I certainly did! Some months later, as we got into working on what was then the "new" album, I kept thinking of the painting, feeling a connection between it and the music we were making. Music which was a little different from the preceding three albums.

In part, a reaction against the hemmed-in feelinq of having been filtered and "labelled" by media and music business expectations. We approached the artist about using his work on the cover of that album and he graciously said "yes". The album was "Night Vision", the paintinq "Horse and Train", the painter Alex Colville.
Bruce Cockburn, May 2002

Born in Ottawa in 1945, Cockburn set his sights on a career in music after growing up listening to Elvis records. He landed at Berklee College of Music in Boston in the early '60s, but found he was too spiritually restless to settle into studies of jazz guitar and composition, and in 1965 he moved back to Ottawa to play in a series of rock 'n' roll bands.

Cockburn eventually found his voice as a songwriter drawing upon instinctive spirituality, a keen eye for detail, and a wry sense of humor. By then he had also developed a highly personal finger-picking guitar style that merged Mississippi John Hurt blues with modal jazz harmony as well as melodic lyricism and cycling rhythms that suggested an ear for Indian, Asian, and African music. 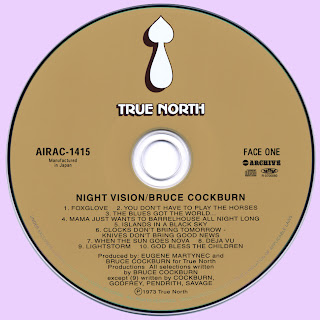