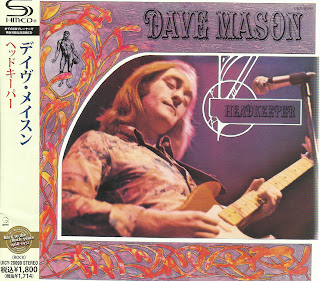 Tommy Li Puma, Dave Mason's coproducer at Blue Thumb, has notified by mail various radio stations and record distributors across the country to go ahead and promote Headkeeper, in spite of the fact that Mason has brought a lawsuit against the label. For those of you who do not boycott the album, Headkeeper has plenty of moments to justify your purchase, and yet leaves you feeling that it is an incomplete, unfinished album.

Each of all the five songs on side two is a live recording of material Mason had recorded elsewhere. "Pearly Queen," a song that here is attributed to Mason and on the Traffic album is credited to Winwood and Capaldi, got itself a better treatment the first time around, simply because Winwood's vocal was funkier, grittier, more edged with irony.

The song itself has enough propulsion in it that it doesn't need the extra added bit of soul that Winwood gives it, but then why not? Mason's interpretation here of "Feelin' Alright" is different from the one he delivered on Traffic. Then he sang with a whimpering, quaveringly insecure voice which, when joining the chorus, instantly picked up sarcastic strength. The change was always sudden and dramatic as Clark Kent leaping out of a broom closet dressed as Superman.

In the present version, latin jazz rhythms open the song and right from the beginning all the way through, Mason sings with extroversion and authority. Now he even takes a supposedly humbled line like "Well, boy, you sure took me for one big ride," and turns it inside out to read like a gorgeous put-down. Whatever Chris Wood offered in the way of bluesy saxophone on the first version, Mark Jordan matches well with his jazz electric piano on this.

Maybe if Headkeeper had had two sides of new material rather than just one, Mason as an artist to our view would have been standing less like "a mist upon the shore." He never has been an easy one to figure out, in his public life or in his music. With Headkeeper he by no means has painted his masterpiece, but instead has left us with some fine sketches and life studies.
by David Lubin, Rolling Stone, 4-13-72. 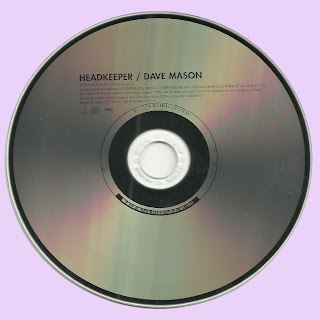 Free Text
the Free Text
Posted by Marios at 8:05 AM 3 comments: