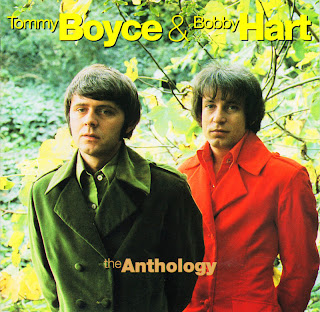 It might be cute to say that Boyce & Hart were the hand inside the Monkees' puppet head, if not for the fact that the Monkees had legitimate talent and have already caught enough grief over their prefabricated origins. Boyce & Hart had yet more talent, though, and not only plied the Monkees with hit songs but, in some cases, performed them, too.

Tommy Boyce enjoyed minor teen idol success as a solo act with "I'll Remember Carol" in 1962 before teaming up with Bobby Hart to produce one Top Ten hit ("I Wonder What She's Doing Tonite") and a handful of lesser chart entries. This Australian anthology, simply titled The Anthology, contains two of Boyce's solo recordings (including his hit), 18 A&M recordings from Boyce & Hart's prime (including all of their hits), and five songs the duo cut with the Monkees' Davy Jones and Micky Dolenz in the '70s. The Boyce & Hart recordings are the highlights, especially the bubblegum pop of songs such as "I Wonder What She's Doing Tonite" and "The Countess."

Listeners already familiar with the Monkees' albums will experience deja vu throughout as Boyce & Hart demonstrate again and again the extent to which they were the architects of the Monkees' sound. Even the Monkees' detours into pop psychedelia are matched by Boyce & Hart on a trippy rendition of "Jumpin' Jack Flash." The theme song from the 1967 spy film The Ambushers (complete with gunshot sound effects) is campy fun, as are the mid-'70s cover versions of "Teenager in Love" and the Beach Boys' "Sail on Sailor," provided one doesn't approach them with high expectations.

For those who want only the Boyce & Hart recordings, a more recent compilation on Rev-Ola titled I Wonder What She's Doing Tonite: The Best of Boyce & Hart limits its focus to recordings from the pair's late-'60s heyday.
by Greg Adams 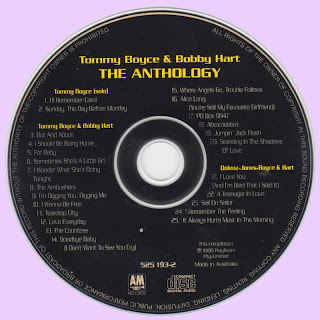